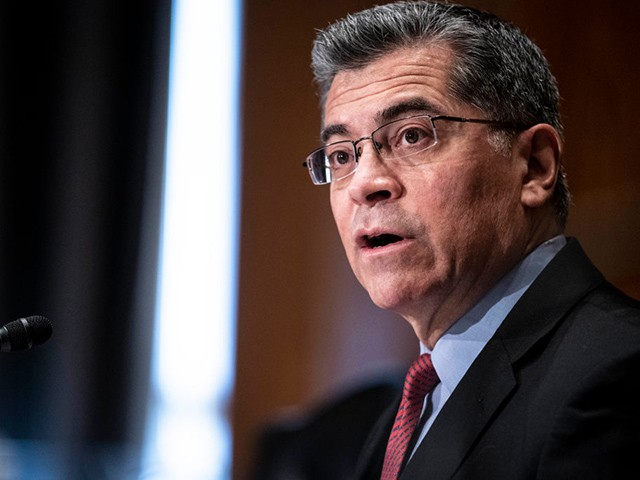 CLAIM: Health and Human Services (HHS) Secretary Xavier Becerra denied multiple times during a House subcommittee hearing Wednesday that United States law bans the procedure known as partial-birth abortion and made clear he does not intend to recognize it.

.@RepGusBilirakis: Will you uphold the law banning Partial-Birth Abortions?@SecBecerra: There is no such law…

This law bans killing a child when it is already partially born.

You voted AGAINST this law.

During a hearing of a House Energy and Commerce Committee Health subcommittee Wednesday, Rep. Gus Bilirakis (R-FL) asked Becerra if he intends to “follow the law,” as he said during his confirmation hearing, and if that included the Partial-Birth Abortion Ban.

Becerra responded, “There is no law that deals specifically with the term ‘partial-birth abortion.’”

The law itself provides a definition for Partial-Birth Abortion:

(1)    A moral, medical, and ethical consensus exists that the

practice of performing a partial-birth abortion–an abortion in

which a physician deliberately and intentionally vaginally

delivers a living, unborn child’s body until either the entire

baby’s head is outside the body of the mother, or any part of

mother and only the head remains inside the womb, for the

purpose of performing an overt act (usually the puncturing of

that the person knows will kill the partially delivered infant,

performs this act, and then completes delivery of the dead

infant–is a gruesome and inhumane procedure that is never

medically necessary and should be prohibited.

(2)    Rather than being an abortion procedure that is embraced

by the medical community, particularly among physicians who

abortion remains a disfavored procedure that is not only

unnecessary to preserve the health of the mother, but in fact

circumstances, their lives. As a result, at least 27 States

banned the procedure as did the United States Congress which

Thank you @RepGusBilirakis for holding HHS Secretary Becerra – the top health official in the nation – accountable for upholding our nation’s laws protecting the most vulnerable among us: unborn children pic.twitter.com/WiYQk0Qkep

As he questioned Becerra, who is now the top health official in the nation, Bilirakis asked:

During your confirmation, you told Sen. Daines that when it comes to laws related to abortion, and I’m quoting, “My job will be to make sure that I’m following the law.” And the question is, do you agree that partial-birth abortion is illegal, sir?

Thank you for the question. And as I said in response to some of those questions during my confirmation hearing, we will continue to make sure we follow the law. Again, with due respect, there is no medical term like partial-birth abortion, and so I would probably have to ask you what you mean by that, to describe what is allowed by the law.

Roe v Wade is very clear, settled precedent, and a woman has a right to make decisions about her reproductive health. And we will make sure that we enforce the law and protect those rights.

Okay, and you agree with this particular law?

Which law are we talking about, sir?

Well, again, again as I said, there, there is no law that deals specifically with the term partial birth abortions. We are, we have, clear precedent in the law on the rights that women have to reproductive health care, and we, as I said in the confirmation hearing, we will follow the law, and protect the rights of all Americans to their health care.

Thank you. So, you will … enforce the current law. Thank you very much.

🚨HHS @SecBecerra just REFUSED to acknowledge our nation’s legal ban on partial-birth abortion (18 U.S. Code § 1531). As we’ve feared all along, @SecBecerra is brazenly ignoring the law of the land. 🚨 pic.twitter.com/2sV7jjSH2U

[I]t didn’t seem clear that you understood what my colleague, Mr. Bilirakis, meant by the term partial-birth abortion. I think that it needs to be defined as it is in statute section 1531 of Title 18 U.S. Code, literally titled “Partial-birth abortions prohibited.”

That statute very clearly defined this inhumane procedure in section B, subsection one. So now with that clarification, could you please recognize that that does exist in statute? And I would ask you, do you agree that this law is correct?

Thank you very much and thanks for trying to clarify. I actually, I think I understood the question, and I think I understand your question as well. What I’m trying to explain is that the term partial-birth abortion may be recognized in politics, and by politicians, but it is not a medically recognized term. Perhaps if you were to talk about what you probably know as Dilation and Extraction, which is a procedure used by OB/GYNs, like my wife, to care for a woman who is having a difficult pregnancy, where there’s a chance that the fetus will not survive, then we can talk about that, but what I’m saying to you is that under the law, a physician or any provider of health care, must make sure that he or she abides by the law. And right now what our law says, and it’s pretty settled, is that a woman is entitled to reproductive rights.

And so my question is not so much with the term partial-birth abortion. It’s what the rights are of a woman. Our statutes and under our precedents to provide her with the reproductive care that she’s entitled to. And as my wife would tell you, as an OB/GYN, is that the Dilation and Extraction procedure that is often used in late-stage abortions, for women, it’s to protect the health and life of that woman.

Just for further clarification, partial-birth abortions are prohibited right now, under current statute, and that is something that you recognize correct, Mr. Secretary?

As I said, I recognize that the law provides women with reproductive rights, and that the Roe v Wade decision made very clear under what circumstances, women could exercise those rights. I will do everything I can to make sure we comply with precedent and the law when it comes to protecting a woman’s right to reproductive health.

And that does include enforcing this statute, correct?

I will make sure that we are providing women with the protections they need on their reproductive rights, and again there, with respect, I know that this is a very sensitive issue for a lot of folks, but I think most medical practitioners will tell you they understand what Dilation and Extraction procedure is. I doubt that most of them can give you a medical definition of partial-birth abortions.

As a physician myself, Mr. Secretary, I think I clearly understand what a partial-birth abortion is.

“Becerra can hardly plead ignorance on this topic. As a freshman congressman, he voted against the ban,” said SBA List President Marjorie Dannenfelser. “This shameless lie is standard for the most radical pro-abortion administration in history. It should not be hard to recognize that partially delivering a baby and then suctioning his or her brain is not only illegal, but utterly inhumane.”

Becerra is very much aware of the Partial-Birth Abortion ban. When PP was caught red-handed admitting they used the partial-birth abortion method, instead of prosecuting PP, then-California AG Becerra prosecuted the undercover journalists @CtrMedProgress https://t.co/WSjssr4RxP

During his confirmation hearing, Becerra used his own mother as a prop when Sen. Steve Daines (R-MT) asked him if there is “just one restriction that relates to abortion that you might support?”

Becerra dodged the question by making a reference to his “Catholic” background that included a mention that his mother “blessed” him before he attended his confirmation hearing and that she “prays the rosary every day” and “said a prayer and included me in that prayer.”

During the subcommittee hearing Wednesday, Becerra used his OB/GYN wife as a prop to falsely imply that women who obtain “Dilation and Extraction” (D&E) abortions do so because they are “having a difficult pregnancy, where there’s a chance that the fetus will not survive,” and to “protect the health and life” of a woman.

Abortion rights advocates often falsely claim late-term abortions are performed because of dire health problems with the unborn baby or with the mother.

During the 2016 presidential race, failed Democrat nominee Hillary Clinton brought the same false claim forward once again and it has been repeated continually by the abortion industry and their allies in politics and the media.

The problem with the claim is that abortionists themselves have been saying it is false for decades.

“The majority of these procedures [late-term abortions] are performed… on healthy women and healthy fetuses.” – Ron Fitzsimmons, Director of the National Coalition of Abortion Providers https://t.co/S8IiG32gr9

According to a 1997 report in the Los Angeles Times, Ron Fitzsimmons, former executive director of the National Coalition of Abortion Providers, admitted partial-birth abortions were not that rare.

“The abortion rights folks know it, the anti-abortion folks know it and so, probably, does everyone else,” Fitzsimmons said, adding that he “lied through [his] teeth” during a Nightline interview when he said partial-birth abortions were rarely performed and only due to fetal anomalies and serious health risks to the mother.

We have some experience with late terminations; about 10,000 patients between 24 and 36 weeks and something like 800 fetal anomalies between 26 and 36 weeks in the past 5 years.

“That equates to a mere eight percent of Tiller’s late-term patients who aborted because their babies were diagnosed prenatally with a health condition,” pro-life organization Live Action observed.

A study released in 2013 by the pro-abortion rights Guttmacher Institute also found that women who were seeking both first-trimester and late-term abortions provided the same reasons for delaying the procedure, including “not knowing about the pregnancy,” “trouble deciding about the abortion,” and “disagreeing about the abortion with the man involved.”

The study concluded that “most women seeking later terminations are not doing so for reasons of fetal anomaly or life endangerment.”

A 2018 report for the Congressional Research Service noted that Dr. Diana Greene Foster, professor at the University of California, San Francisco, said abortions for fetal anomaly “make up a small minority of later abortion” and that, due to inadequate data, those for endangerment to the life of the mother are even more difficult to describe.

90% of abortions occur before 21 weeks. As a doctor & public health expert, I can tell you that those that occur later often result from a diagnosis of severe fetal abnormalities, or serious risks to the woman’s health.

Wen repeatedly made the claim that the procedure is performed in the third trimester of pregnancy due to “severe fetal abnormalities” or “serious risks to the woman’s health.”

In late 2011, the Centers for Disease Control and Prevention (CDC) reported nearly 13,000 fully developed babies who would be able to survive outside the womb are aborted annually.