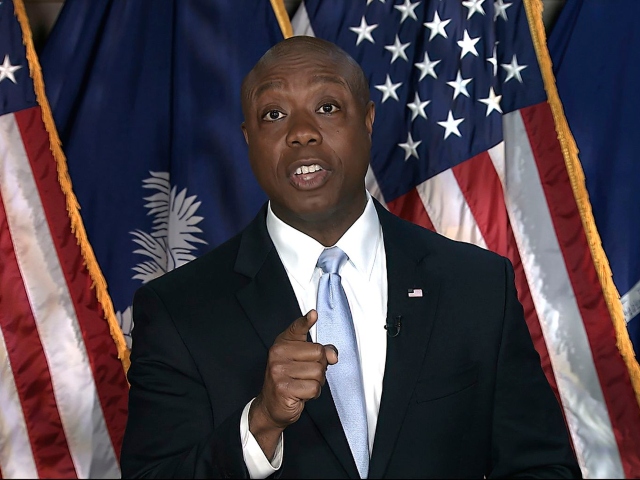 In the wake of his rebuttal to President Joe Biden’s address to a joint session of Congress, leftists on Twitter began using the hashtag “Uncle Tim” in reference to Scott, the lone black Republican in the Senate.

Democrats, who claim to be the only party to stand up for black Americans, have also reportedly remained silent on using the hashtag “Uncle Tim,” a play on the derogatory racial caricature Uncle Tom’s name presents black people as subservient.

Scott, the lone black Republican in the Senate, called out the hypocrisy of so-called “woke” corporate America.

He indicated that while they support BLM, sometimes echoing one of the leftist group’s favorite slogans, “Silence is violence,” they stay silent when the political ideology of a victim of racism does not align with the left.

Corporate America marches to the Left’s “silence is violence” rallying cry, but now that a conservative is attacked? Crickets.

This isn’t about me.

If you won’t stand up against racism, what are you saying to young Black & brown kids who dare to think differently? Be better. pic.twitter.com/wMnJak503h

Via Twitter, conservatives, including Sen. Lindsey Graham, ripped the NAACP and BLM for not condemning the racial slur after it was disseminated by liberal critics of the black GOP senator Wednesday, the Daily Mail pointed out.

The racial slur “Uncle Tim” was trending on Twitter for 12 hours unhindered, despite the social media giant’s policy that bans all forms of racism on its microblogging platform.

Twitter ultimately blocked the hashtag after 12 hours, blaming “an algorithm” for allowing “#UncleTim” to trend for so long,” the Hill noted.

While Republicans, even Never-Trumpers, hailed Scott’s response, Biden’s address received criticism from both parties, potentially fueling the ire against the black senator.

Angering Democrats and their supporters, Scott made headlines by saying, “Hear me clearly: America is not a racist country.”

“I’ve also experienced a different kind of intolerance,” he later noted. “I get called ‘Uncle Tom’ and the N-word — by ‘progressives’! By liberals!”

That comment likely triggered or at least helped to spark the vitriol that followed on Twitter, with leftists doubling down and calling him “Uncle Tim” over and over again.

Last night what was trending in social media was “Uncle Tim,” and they doubled down on this concept of liberal oppression. It is stunning in 2021 that those who speak about ending discrimination want to end it by more discrimination.

The left has… doubled down that they are going to, not attack my policies, but they’re literally attacking the color of my skin. You can’t step out of your lane, according to the liberal elite left.

Leftists on Twitter and Democrat-allied pundits on CNN and MSNBC were also reportedly angry with Scott’s contention during his rebuttal that he does not believe America is racist despite personally experiencing discrimination.