‘Woke, Corporate Hypocrisy Is on the Rise’ 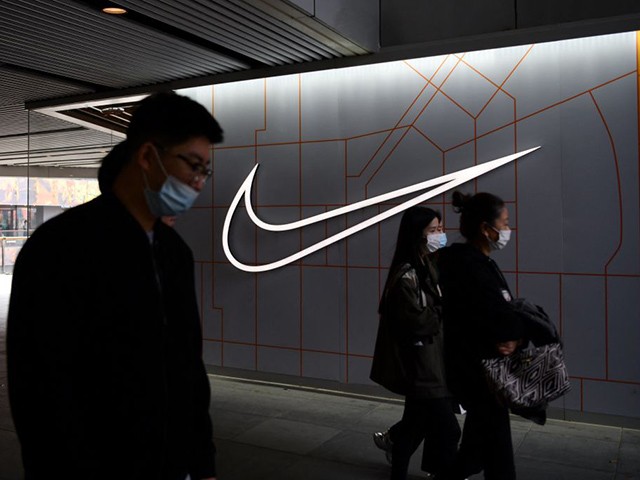 A representative from Nike declined an invitation to testify Thursday at a House Foreign Affairs Committee hearing that discussed China’s human rights abuses of its minority Muslim Uyghur population and American corporations that could be manufacturing products made with Uyghur slave labor in Xinjiang Province, according to committee members.

Rep. Andy Barr (R-KY) slammed Nike’s denial of the invitation, given its suspected manufacturing of products made with Uyghur slave labor and the company’s woke activism, such as cancellation of its Betsy Ross flag sneaker, after former NFL player Colin Kaepernick said they were offensive.

“It is shocking and appalling that Nike canceled Betsy Ross’s American flag sneaker at the same time they were exploiting the Chinese Communist Party’s Uyghur slave labor in the Xinjiang Province,” Barr said in a statement to Breitbart News.

“Despite Nike’s statement of concern in March 2020 about forced Uyghur labor, Nike actively opposed the Xinjiang Forced Labor bill that Congress passed last November. Woke, corporate hypocrisy is on the rise, and I will continue to expose it on climate and in culture when I see it in Congress,” he said.

A bipartisan congressional report issued on March 2, 2020, found that Nike is one of several big American corporations suspected of using Uyghur forced labor in Xinjiang Province.

A week after the report, Nike issued a lengthy statement acknowledging the concerns and denying that the company sourced raw materials from forced labor connected to the Uyghurs in China.

Nike is committed to ethical and responsible manufacturing and we uphold international labor standards. We are concerned about reports of forced labor in, and connected to, the Xinjiang Uyghur Autonomous Region (XUAR). Nike does not source products from the XUAR and we have confirmed with our contract suppliers that they are not using textiles or spun yarn from the region.

While Nike does not directly source cotton, or other raw materials, traceability at the raw materials level is an area of ongoing focus. We are working closely with our suppliers, industry associations, brands and other stakeholders to pilot traceability approaches and map material sources so we can have confidence the materials in our products are responsibly produced.

However, seven months after the congressional report, Nike lobbied against the Xinjiang Forced Labor bill, according to a New York Times report.

I’m disappointed our minority witness declined our invitation to join us this afternoon. I did invite Nike Inc., an American company that’s now struggling with the moral challenge that many American companies face. Some analysts claim that Nike’s supply chain is tainted by forced labor in China. Nike has publicly denied they source from the Uyghur areas, and have denied Uyghur forced labor exists in their factories.

McCaul noted that Nike’s statement exposed the company to a “massive boycott effort led by the [Chinese Communist Party’s] mouthpieces,” and speculated that Nike may not have wanted to appear before the committee due to likely backlash from the CCP.

McCaul also slammed Disney, which he said has thanked the CCP’s propaganda office responsible for covering up the Uyghur genocide, and even credits the office in their film Mulan, which was partially filmed in Xinjiang. McCaul said:

We cannot put profits ahead of doing what’s right, and Americans need to hear from these companies doing business with the CCP, whether they are household names just trying to do the right thing, or they’re companies who shamelessly do the bidding of the CCP to shamelessly maintain their market access no matter what the moral cost is.

“The true nature of these faustian deals need to come to light so consumers can begin to know where their money’s going,” he said.