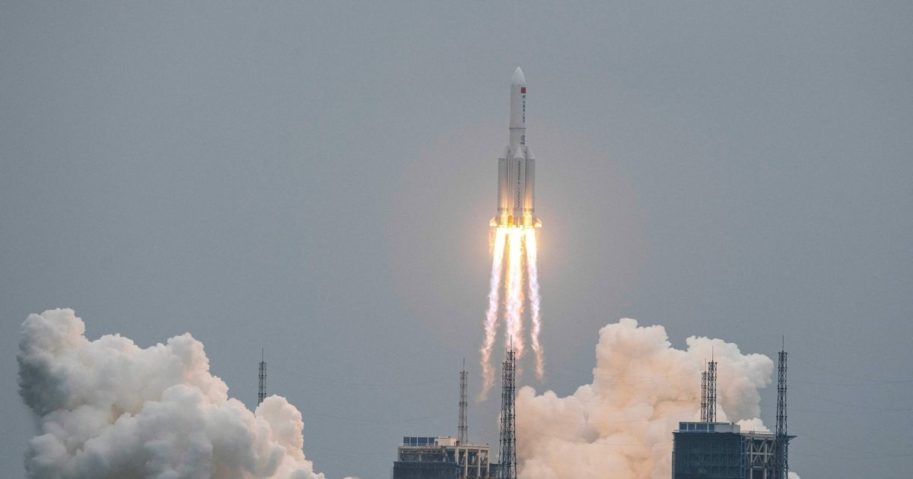 A massive Chinese rocket will be falling to Earth, with large sections of the United States among the possible sites, but no one knows where or when the rocket will hit

The Long March 5B rocket pushed China’s first module for its space station into orbit on Wednesday. However, the booster rocket remained in orbit as well as the payload.

That means that the core of the rocket, which weighs about 21 metric tons, the equivalent of about 23 tons, will eventually tumble back to Earth, according to SpaceNews.

In its reporting, SpaceNews explained that most launch rockets are not designed to go into orbit, but to crash back to land in a safe area.

“Most expendable rocket first stages do not reach orbital velocity and re-enter the atmosphere and land in a pre-defined re-entry zone. Some other larger, second stages perform deorbit burns to lower altitude to reduce time in orbit and lower chances of collisions with other spacecraft or to immediately re-enter the atmosphere,” it said.

In March, the second stage of a Falcon 9 rocket used by SpaceX returned to Earth in a fiery spectacle that saw most of the rocket burn up upon re-entry, although some pieces of debris reached the ground.

Last May, China’s first Long March 5B made a similar uncontrolled re-entry, scattering debris across the Atlantic Ocean and part of western Africa, SpaceNews reported.

Do you think this rocket re-entry will cause problems?

At the time, estimates of the rocket’s path indicated that had it returned to Earth 30 minutes sooner, debris would have landed on the U.S.

The U.S. military is tracking the rocket, the report said.

The SpaceNews report said that the timing of the rocket’s blazing return is unclear.

“The decay of its orbit will increase as atmospheric drag brings it down,” the report explained. “The speed of this process depends on the size and density of the object and variables include atmospheric variations and fluctuations, which are themselves influenced by solar activity and other factors.”

As it orbits the Earth every 90 minutes, “the rocket body passes a little farther north than New York, Madrid and Beijing and as far south as southern Chile and Wellington, New Zealand, and could make its re-entry at any point within this area,” the report stated.

The most likely event will see any debris that actually survives the intense heat of re-entry falling into the oceans or uninhabited areas, but the risk remains of damage to people or property.

One observer said the danger — and the potential show — would be almost without precedent.

“The Long March 5B core stage is seven times more massive than the Falcon 9 second stage that caused a lot of press attention a few weeks ago when it re-entered above Seattle and dumped a couple of pressure tanks on Washington state,” spaceflight observer Jonathan McDowell told SpaceNews, noting that last year’s return of the Long March 5B launch was the fourth-biggest uncontrolled re-eetry in spaceflight history.