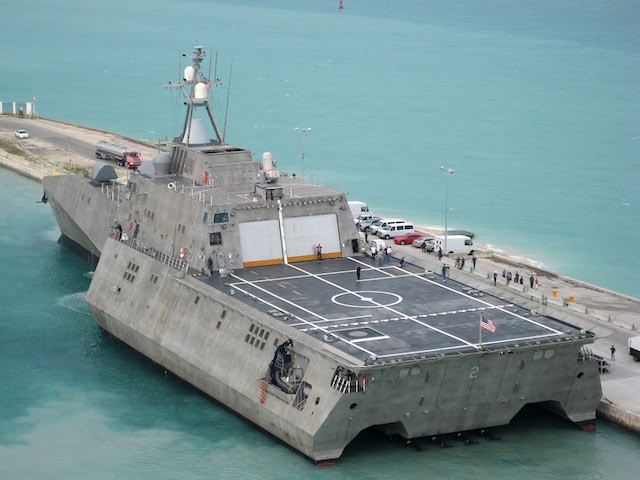 A U.S. Navy spokeswoman confirmed on Monday that USS Independence and USS Freedom, the Navy’s first two Littoral Combat Ships (LCS), will be decommissioned in July and September of this year, respectively.

Both ships are only halfway through their originally projected service lifespans of 25 years.

The LCS program has been dogged by criticism of its cost and effectiveness since its inception. USNI News on Tuesday quoted Navy officials suggesting the first four LCSs should be regarded as prototypes or “test ships,” so the decommissioning of LCS-1 and LCS-2 is not unusual or an indication that the entire class of ships could be retired.

“I’m not buying it because we need to look at what’s Battle Force 2025, we need to look at what we have today and how we can use it and how we can use it most efficiently. The idea of divesting of current platforms that still have usable service life in order to invest in something that we might develop the technology for in the future – paired with our poor track record on [developing new] platforms – just makes absolutely no sense to me,” Luria told USNI News.

“I agree with research and development into new technologies, I agree with a modest investment into developing capabilities for unmanned surface vessels; however, while that remains a technology that’s not mature, I do not agree with divesting of resources and assets that we have today that are desperately needed in order to deal with the issue we have with China, with Russia, and just around the world.”

Admiral Mike Gilday, Chief of Naval Operations, estimates it would cost $2.5 billion to upgrade the first four LCSs to meet the specifications of the other thirty ships in their class that are either in service, under construction, or in the planning stages.

The Navy estimates its LCS fleet cost $16 billion to construct and will cost $61 billion to maintain, even with the first four ships decommissioned. Critics of the program say this is a hefty price tag for a ship that was supposed to be exceptionally inexpensive to build and maintain.

Critics also believe the LCS does not provide enough bang for the taxpayer buck.

“The Littoral Combat Ship can’t fight, and the U.S. Navy is finally coming to terms with it,” Forbes wrote on Thursday, predicting the retirement of LCS-1 and LCS-2 would begin “an unhappy reckoning with a program that has consumed billions of dollars without delivering much in the way of useful capability.”

Forbes noted that USS Freedom has “managed to deploy for low-stakes missions around Latin America,” while USS Independence has “never completed a front-line cruise.”

The Littoral Combat Ship – known derisively by some Navy personnel as the “Little Crappy Ship” – was designed to be small, fast, agile, inexpensive to build, highly customizable, and specialized at fighting in shallow water. The first LCS contract was awarded in 2005.

The general idea was to have a ship the Navy could produce quickly and reconfigure on the fly as its needs changed, driven by post-9/11 theories that America’s enemies in the near future would be terrorists and rogue states using small craft and operating close to shore. The shallow water capabilities of the LCS were also thought to be useful for supporting ground operations and conducting diplomacy, since the ships can pull into small foreign harbors and show off their sleek, high-tech looks.

The LCS comes in two distinct variants: the first, constructed by Lockheed Martin and given odd-numbered designations, began with USS Freedom, while USS Independence is the first of the even-numbered General Dynamics models.

Both versions nominally have a crew of about 40, although the Navy has been assigning considerably more sailors to each ship. The Navy stopped building Freedom-class ships this year because it found a design flaw in their transmission systems it could not address.

As Forbes pointed out, some key elements of the original design never really worked as anticipated, including a high-speed propulsion system prone to breakdowns and a modular reconfiguration system the Navy essentially gave up on. Even the toilets had problems, although in fairness toilets are among the most tenacious enemies of the U.S. Navy.

The Independence class of the LCS fleet is based in San Diego. The San Diego Union-Tribune ruefully observed on Sunday:

It doesn’t help that some of the ships have suffered embarrassing breakdowns in mid-ocean. Or that the Navy discovered recently that the transmission in one of the two classes of ships was defective and needed to be redesigned. And while Congress has eagerly funded construction of the two very different classes of ships, it cut funding from the mission modules needed by the ships to fulfill their missions.

“The Navy is not getting what they expected to get out of LCS at this point. There was a lot of over-promising of capability and technology and concepts that didn’t come to fruition,” Shelby Oakley of the General Accounting Office told the Union-Tribune.

Oakley suggested some of the LCS’s operational difficulties and cost overruns came from cramming too much new technology into a revolutionary design, resulting in a ship that costs too much and spends too much time at the docks.

The larger problem is that LCSs are small and lightly-armed, which is useful for chasing terrorists or fighting the swarms of little boats favored by adversaries like Iran, but not much use against the rapidly growing blue-water navy of China.

As Rep. Luria alluded to in her interview with USNI News, the Navy is experimenting with using drone technology that could help spot enemy ships at very long range and give the LCS a chance to dart in, launch an effective strike with its small complement of missiles, and evade retaliation. The Navy began installing Naval Strike Missiles with 100-mile ranges on LCSs in 2019 to improve their striking power on the open sea.

The Chinese are very fond of drones, too, and they are coupling their unmanned technology with much larger and better-armed ships that can both give and take a punch better than the LCS. The U.S. Navy appears to be hedging its bets with a new class of frigate to replace the LCS in deep-water missions, possibly motivated by rising tensions in the South China Sea.