Trump to Resume His Signature MAGA Rallies Within Weeks 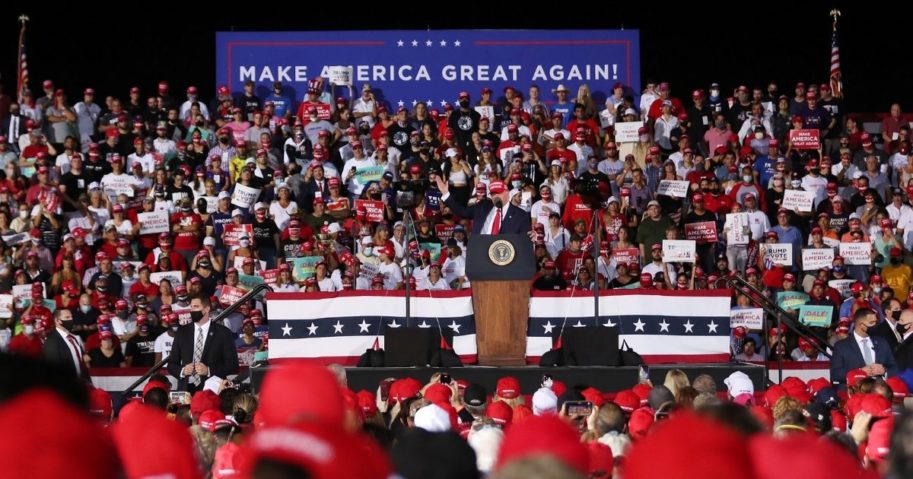 Former President Donald Trump is planning to resume his signature “Make America Great Again” rallies as soon as May, according to a report Wednesday.

CNN, citing unidentified aides, reported that Trump has “initiated discussions” about the rallies and “the logistics are still being worked out,” but they could return in just weeks.

The outlet quoted what it called a “person close to Trump’s post-White House operation” as saying, “It will definitely be different in terms of the setup, but we got really good at planning these events in 2020, so we will probably use a lot of those same vendors again.”

Trump has said he wants to travel to Alaska to campaign against Republican Sen. Lisa Murkowski, who voted to convict Trump on charges of “incitement of insurrection” during his second impeachment trial.

The former Republican president also said he is also interested in holding campaign events for candidates he has endorsed.

It is still unclear if Trump will seek a second term and run in 2024.

In an interview on “The Truth with Lisa Boothe,” he said the Republican Party has “a pretty deep bench” of possible presidential nominees, including Florida Gov. Ron DeSantis, South Dakota Gov. Kristi Noem and Missouri Sen. Josh Hawley.

Trump has spent his first 100 days out of office recruiting Republican primary challengers and weighing the possibility of a potential comeback presidential bid, CNN reported.

Trump’s wildly popular rallies began during the 2016 campaign season and continued throughout his presidency.

He often used the events to excite his supporters and draw energy to his presidency and campaign, Politico reported.

Rallygoers in Scranton, Pennsylvania, in November described the event as a “rock concert.”

“There is no more energy anywhere else in the world right now than right now,” Dave Ragan told the Citizens’ Voice in Wilkes Barre.

Mack Tasetano added that “there’s nothing like a Trump rally — the energy, the atmosphere.”

“This will be my 47th rally seeing Donald Trump as candidate and president,” Edward Young of Brick, New Jersey, told the outlet.

“My friends and I have been to seven rallies in the past nine days,” he said. “I do this because it’s a unique part of history. It’s very exciting.”

Young added, “No president has ever been this much fun. Donald Trump is our first rockstar superhero president.”

Trump also used his presence on Twitter to reach his supporters, but he has been permanently banned from the platform.