This Is ‘Biden’s Mess’; U.S. Has Become ‘Sanctuary Nation’ 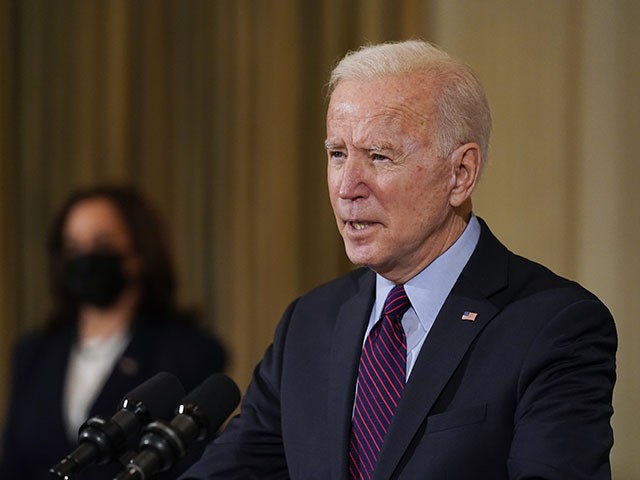 McALLEN, Texas — Rep. Jim Jordan (R-OH) led several Republican members of the House Judiciary Committee on a two-day visit to McAllen this week where they witnessed the ongoing border crisis, and all the members — as they recapped their visit — said the Biden administration was at fault for surging numbers of illegal migrants.

Border Patrol agents apprehended nearly 170,000 migrants crossing the southern border illegally in March, a 72 percent increase from February. As Breitbart News reported, in the first two full months of President Joe Biden’s time in office, February and March, apprehensions were at a combined total of nearly 210,000, while in the last four months of former President Donald Trump’s tenure, apprehensions were at a combined total of just over 280,000.

Jordan, the ranking Republican member on the Judiciary Committee, gathered from speaking with Border Patrol agents that the Trump-era Migrant Protection Protocols (MPP) program, also known as Remain in Mexico — which Biden’s Department of Homeland Security suspended on his first day as president — is imperative to reinstate as a first step in controlling the migrant influx.

Jordan told Breitbart News on Wednesday near the conclusion of his visit, “This is … not just Jim Jordan talking, not just Republican members of the Judiciary Committee talking. This is the Border Patrol agents themselves, what they’re telling us. That’s what we’ve got to get done, and we have to talk about this and try to persuade our Democratic colleagues this is just good common sense. This is for the good of the country, and frankly, it’s for the good of these kids and these families who are making that treacherous trek up through Mexico to get here.”

The MPP program allowed border officials to return asylum-seeking migrants back to Mexico while they await the processing of their claims, which the Trump administration at the time of implementing the program, in January 2019, said would serve as a deterrent for illegal migration and help control an “unprecedented number” of “fraudulent asylum claims.”

Opponents of the MPP program argue sending asylum-seekers back to Mexico puts them in potentially unsanitary or dangerous conditions and creates nearly insurmountable barriers to being granted asylum if they do actually qualify for it.

However, as Rep. Andy Biggs (R-AZ) detailed during a roundtable the delegation attended Wednesday, halting the MPP program has served as one cause — among several other Biden policies — of what has now become America’s “massive humanitarian crisis.”

“We know that it’s policy driven,” Biggs said. “We know that it’s this Biden administration’s policies that have done this. Why do we know that? Because we simply have to look at when those policies were in place. I’m talking MPP, the Remain in Mexico policy. I’m talking about the agreements with the Northern Triangle states, with Guatemala, El Salvador, and Honduras. I’m talking about the incentive factor. We all respond to incentives. How about $1,400 per illegal alien in the COVID relief package? How about a free education? How about, you’ll get transported wherever you need to go? And once you’re in, it’s almost impossible for you to be sent out, and that’s really what’s going on. And so, President Trump found a problem, and he solved it. President Biden saw a solution and now he’s dissolved that and created a massive humanitarian crisis.”

Biggs, at a press conference later on Wednesday, referred to comments Mexican President Andrés Manuel López Obrador made: “That’s why the president of Mexico said this is Biden’s mess. It is Biden’s mess.”

Rep. Dan Bishop (R-NC), who also attended the trip, agreed asylum claims are a “predicate for people entering the country.” He told Breitbart News of the MPP program, “It was an innovative, strategic policy to eliminate the perverse incentive in asylum claims. They can assert their asylum right, but you don’t want as the price of that to have any unlimited numbers of people coming into the country.”

The House Judiciary Committee is the committee that has primary jurisdiction over immigration policy. Jordan said at the press conference the committee’s Democrat members were invited on the trip and declined the invitation. Breitbart News reached out to committee chair Rep. Jerry Nadler (D-NY) to inquire about the reason for this and did not receive an immediate response.

Rep. Tom McClintock (R-CA), the lead Republican on the committee’s subcommittee on immigration, said the Biden administration also shares blame for the swell of illegal migration because of his 100-day moratorium on most deportations. “My assessment is that Biden’s executive order on returning criminal illegals, deporting them after they’ve served their terms, now essentially makes the United States a sanctuary nation,” McClintock said during the roundtable.

Despite a federal judge blocking Biden’s moratorium in February, a Wall Street Journal analysis found Immigration and Customs Enforcement’s job priorities have still changed under the new administration’s policies as indicated by a drop of 50 percent in deportations in March compared with deportations in the months at the end of Trump’s tenure.

Biden’s Department of Homeland Security (DHS) issued a memo on his first day in office justifying calling for the moratorium, saying DHS must “surge resources” to the southern border to “ensure safe, legal, and orderly processing, to rebuild fair and effective asylum procedures that respect human rights and due process … and to prioritize responding to threats to national security, public safety, and border security.”

The delegation’s consensus, however, was that Biden’s immigration policies and rhetoric about such policies have created a magnet for illegal migration and resulted in what has become growing and uncontrollable numbers of illegal migrants.

Two other members of the Judiciary Committee in attendance, Rep. Victoria Spartz (R-IN) and Rep. Burgess Owens (R-UT), railed against Biden for failing to acknowledge the issue. “Not dealing with this issue, not looking at the policies, I think it’s a complete lack of leadership and disregard,” Spartz told Breitbart News.

Owens surmised, “It’s either incompetence or it’s on purpose.”