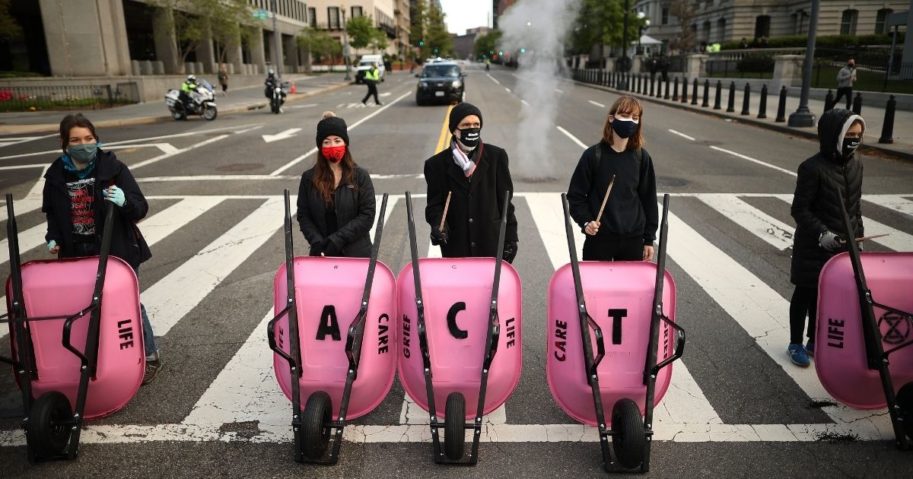 Plenty of adoring media were present to memorialize the event. The Earth Day protest was a not-too-subtle reminder that the Biden administration’s present level of support for the Green New Deal was unsatisfactory — just not strong enough — so that any compromise on emissions goals would be interpreted as a sellout to “the polluters.”

These self-appointed guardians of Mother Earth will assuredly hold the administration to account now that we are down to only seven … err, nine … or is it 10 … or — I forget the exact number of years we have left per climate experts such as Prince Charles, Madonna, Al Gore, Greta Thunberg, John Kerry and the always-reliable United Nations.

Whether the issue concerns extended background checks, red-flag laws, a national gun registry, the outlawing of the AR-15 or limits on ammunition clips, the public is assured of two takeaways: (1) The new law will negatively impact the Second Amendment rights of law abiding citizens, and (2) there will be demands for additional encroaching regulation in the future.

Alas, this “never enough” crowd has recently run headlong into the reality of a huge spike in gun sales resulting from not-so-“mostly peaceful” riots in our major cities.

In similar fashion, America’s media-empowered censorship police have been working overtime to ensure that no American citizen is ever ill at ease or disturbed by painful history or put off by unwelcome opinion.

Their handiwork has narrowed First Amendment protections on campus, in the workplace and on social media. They have successfully banned famous works of literature in schools and applied pressure to book publishers to … cease publishing books (they don’t like).

This is another “to do” list that can never be fulfilled. There is never enough censorship for the easily perturbed.

Do you think leftist activists really want solutions to their “issues”?

Yet another chapter of “Never Enough” haunts the annual debate over public school funding.

This dialogue is a bit tricky as the courts have upheld the constitutional right to an adequate public education — and we know that that right has been denied to too many poor kids for decades.

And so court after court and legislature after legislature has mandated additional education spending because it’s far easier than measuring and reporting on why so many good taxpayer dollars have been spent without any overall measurable improvement on consistently dysfunctional schools.

Of course, there is no magical per-pupil spending number that guarantees a quality education. Too many miscellaneous factors are in play: family income, parental educational attainment and involvement, the effectiveness of teachers and administrators and, believe it or not, student effort.

But you can go to the bank on one thing: Persistently poor performance will always trigger calls for additional spending. It’s just never enough, and proof of its effectiveness is never demanded.

All involved in the public debate must acknowledge the rhetorical effectiveness of “Never Enough.” It is essentially a straw man argument, circular in nature, in which any new proposal is never quite quantified because a new, more intrusive goal (typically requiring more money) is immediately announced.

And so the new goal becomes the focal point for discussion until it too is eclipsed by the next proposal. Brilliant? No doubt. Guaranteed to energize the grassroots? You betcha. Effective in the real world? What kind of question is that?

My more cynical colleagues from the House of Representatives used to observe that the very last thing advocates wanted was for their cause, disease, or issue to be solved. Here, goals reached means you are out of business.

Maybe they had a point.