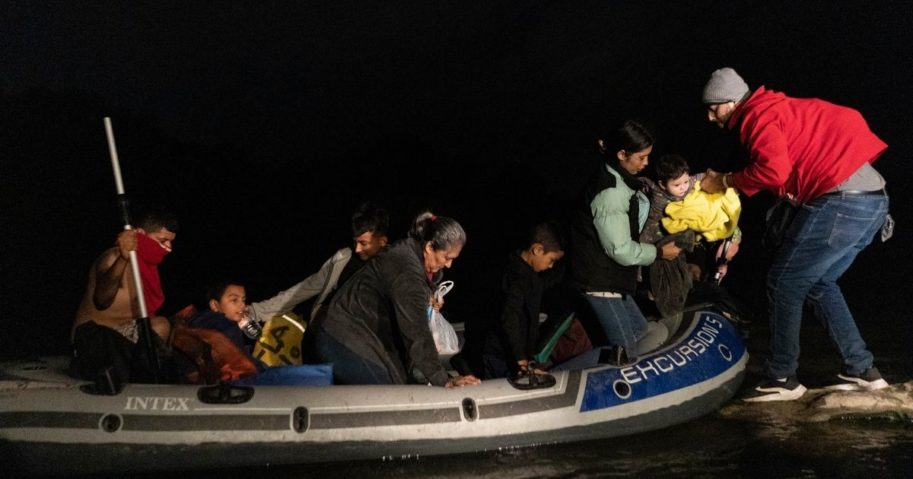 Newly released images from Arizona Representative Andy Biggs’ office appear to show migrants being taken from a hotel in Chandler, Arizona, where they are being housed as well as placed on buses and transported to a local airport.

The Republican congressman shared the videos and photographs with the media on Friday just hours after he wrote to Immigration and Customs Enforcement (ICE) demanding answers on the use of hotels to manage overflow in migrant shelters, as Fox News reported.

According to The Daily Mail, the footage shows migrants being taken from a Holiday Inn which has been converted into a shelter as part of an $86.9 million plan to grapple with the detention overflow amid the Biden-era surge at the border. ICE began placing migrant family units in hotels earlier this month.

“Custody is intended to be short term, generally less than 72 hours, to allow for immigration enforcement processing and establishing appropriate terms and conditions of release while their immigration proceedings continue,” the agency said in a statement at the time. “All families will be tested for COVID-19 and receive a health assessment.”

Chandler a suburb of Phoenix in Maricopa County. It is not clear where the migrants are being flown to in the footage obtained by Biggs’ office, but both The Daily Mail and Fox News noted they were likely being released into the U.S. interior and that some are not even being issued court dates.

Biggs said ICE’s use of hotels to house the overflow of migrants gives us a strong indication there is a crisis at the border, contrary to the insistence of the Biden administration.

“Biden’s border crisis is real and it’s being forced into our local communities,” the congressman said. “These illegal aliens aren’t stopping in border states, they’re being given plane and bus tickets to anywhere in the country. We will not sit back and deal with this egregious exploitation of our border.”

Has the Biden administration lost control of the border?

Now I don’t know about you, but as someone who grew up in a city where the homelessness crisis (remember that?) was an undeniable reality, this really, really gets my goat.

Millions of American citizens — many of whom have loyally served their country and are often egregiously underserved by the federal agency specifically tasked with providing them the basic welfare services they’ve supposedly earned with their service — are homeless.

Meanwhile, the Biden administration is ushering tens of thousands of migrants across the border and using our tax dollars to put them up in hotels because it’s too ill-equipped to handle the overflow of the surge of its own making.

To say nothing of the Americans who have been unable to travel and see loved ones over the last year as the fraction of their income they’re forced to fork over to the federal government goes towards housing and transporting migrants that the Biden administration deliberately chooses to stop otherwise sending back to Mexico to await court dates.

There’s no shame in extending basic human compassion to migrants seeking a better life or safety from dangerous situations in their country of origin—which is what the administration insists is what’s driving their policies.

But this isn’t compassion. Literally no one but human trafficking cartels (and maybe Democrat political candidates *cough*) stands to benefit from the influx of migrants this manufactured crisis has created. It makes matters all the more worse that some of the biggest victims of this twisted racket are the migrants themselves, particularly the children so many politicians are quick to invoke to argue for looser border policy, yet slow to aid now that they’re suffering amid a crippling humanitarian crisis.

This is not OK. None of this is OK. And it’s only for so much longer that they’ll be able to reasonably claim it’s not a crisis.