A picture is worth a thousand words. In this case, if they’re coming from liberals, most of them are unprintable.

On April 23, all nine justices of the newly constituted Supreme Court met for the first time in person. The past year has precluded such a meeting — along with the traditional photo of the current court, given that the COVID-19 pandemic was well underway by the time Justice Ruth Bader Ginsburg died and Amy Coney Barrett was confirmed in her place.

According to ABC News, all nine justices were fully vaccinated, however — and, as they met for a private conference to discuss upcoming cases, they took the customary photograph, sans masks.

The US Supreme Court is set to hear a major #abortion case that will give the justices an opportunity to reconsider the precedent set by Roe v. Wade. https://t.co/B7mr0gHL6e pic.twitter.com/ef8ryUvavi

But because it took so long for the justices to meet up in person and take the picture, the website of the Supreme Court kept cockles of liberal hearts warm for a few months since Barrett’s October confirmation, at least.

Here was a screenshot of the site on May 1, per the Internet Archive: 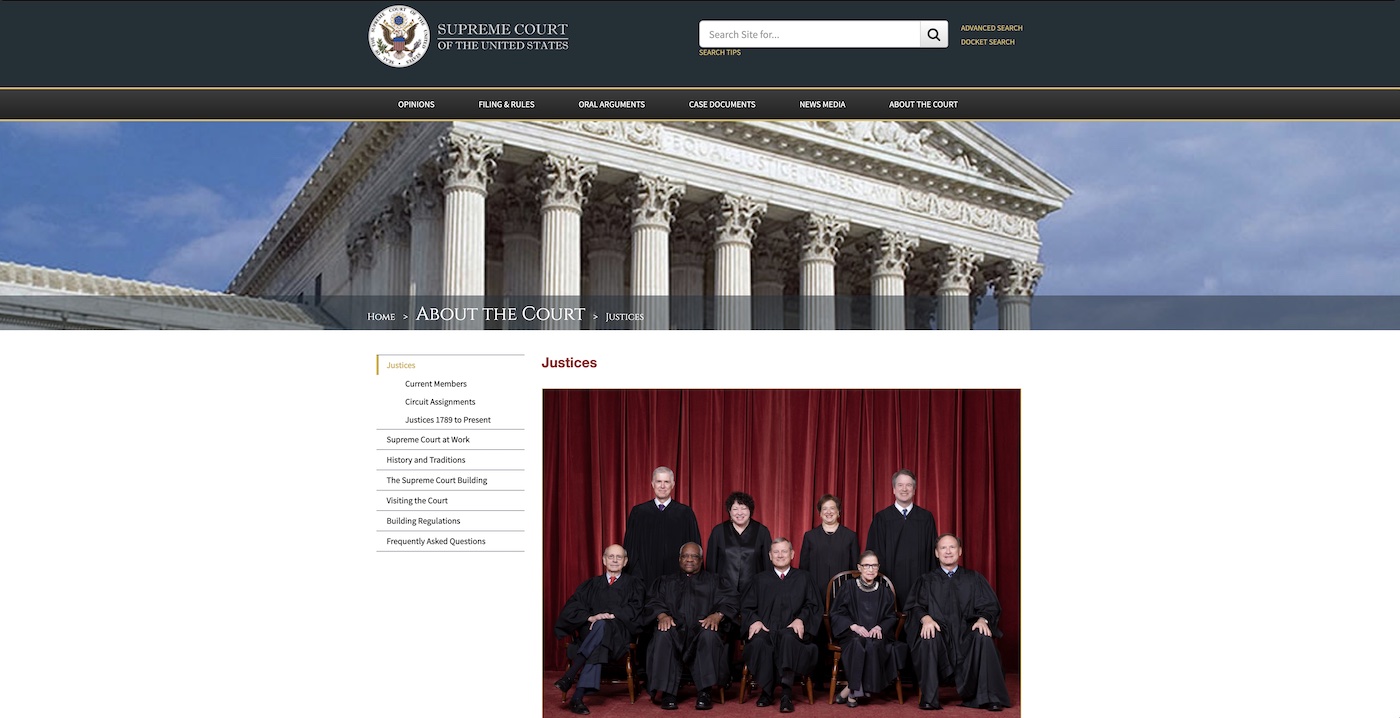 And here we are at present: 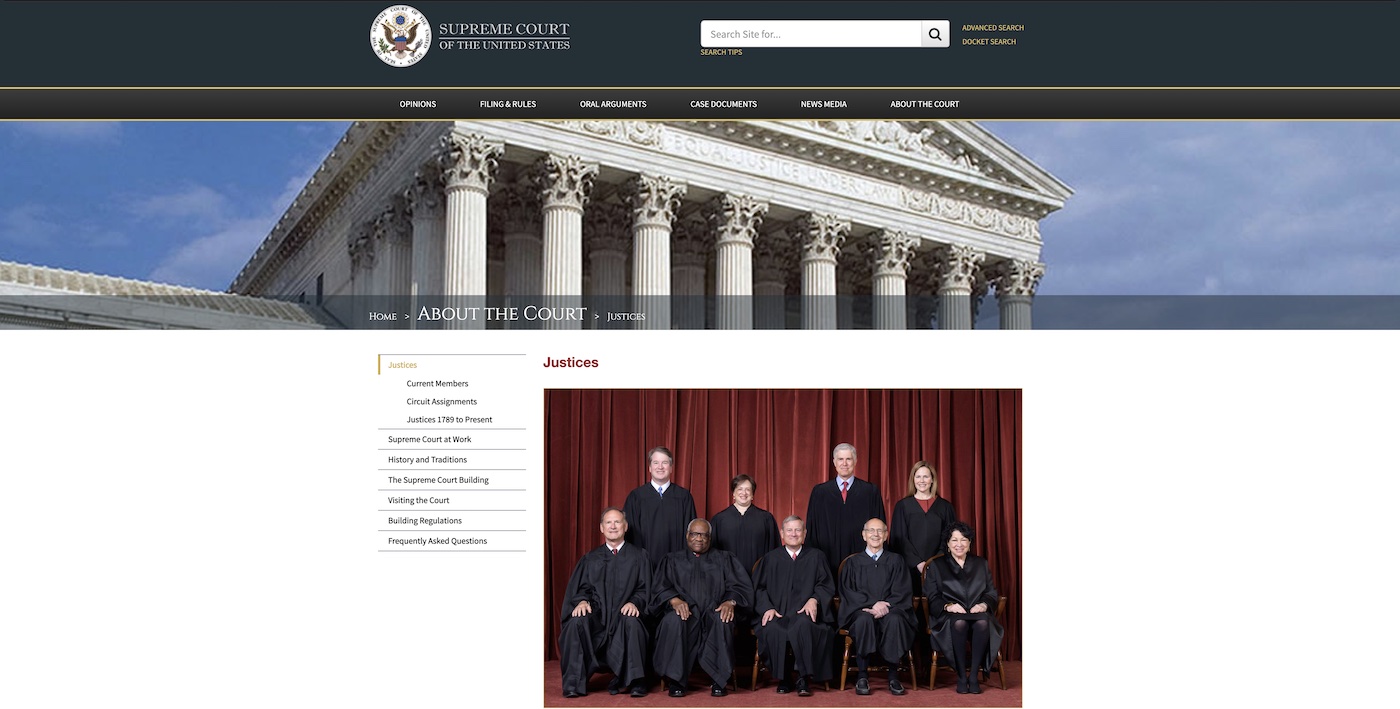 Yes, it’s a tragedy to have lost Ginsburg — she died of cancer on Sept. 18 — and one doesn’t wish to do a victory lap. However, one does wonder what “Screaming Trump Inauguration Lady” was doing when and if she checked out the web page before and after the change. I hope she’s all right.

It’s been 4 years since Woman Screaming No at Trump’s Inauguration pic.twitter.com/DKX552TJsK

Of course, there’s more to the new picture than just a widening conservative majority on the court, one that doesn’t need a dithering Chief Justice John Roberts to have a good day and read the Constitution as it was written.

On Monday, the Supreme Court — which has three justices appointed by former President Donald Trump — announced it would hear arguments in the case of Dobbs v. Jackson Women’s Health Organization, a decision that had been expected, yet it still brought home the importance of the photo.

The case in question has to do with a 2018 Mississippi law, the Gestational Age Act, which bans abortions after 15 weeks.

This is seen as nothing less than Stone Age “Handmaid’s Tale” heresy to liberals who believe that Roe v. Wade wasn’t so much a Supreme Court decision (poorly decided, may I add) but a birthright written in stone.

Yet, as the language of the Gestational Age Act accurately notes, “The United States is one (1) of only seven (7) nations in the world that permits nontherapeutic or elective abortion-on-demand after the twentieth week of gestation.

Will Amy Coney Barrett be a good Supreme Court justice?

“In fact, fully seventy-five percent (75%) of all nations do not permit abortion after twelve (12) weeks’ gestation, except (in most instances) to save the life and to preserve the physical health of the mother.”

In days past, liberals could hope that Roberts would have one of his squishier days and the bill would be struck down. That’s not as clear now — particularly since Barrett is considered to be a strong pro-life judge. (Or, as a certain senator might say, the dogma lives loudly within her.)

If the court modifies its decisions on Roe v. Wade and its companion case, 1992’s Planned Parenthood v. Casey — which established the utterly arbitrary and vague judicial doctrine that it was unconstitutional to pass any law that imposed an “undue burden” on a woman seeking an abortion — we’ll see nothing short of a frenzy of calls for court-packing. All because elections have consequences.

Don’t worry, though: They were going to do that anyway if Justice Barrett was nominated by Trump and/or confirmed by the Senate:

WARNING: The following tweets contain graphic language that some viewers will find offensive.

If they even TRY to replace RBG we burn the entire fucking thing down.

Macfarlane is a professor at @UWaterloo, promoting violence against his political enemies. If you were a young woman in his class who was a Trump supporter, would you risk being a target of his violent rage if he found out about you? Should you transfer to a different class? pic.twitter.com/wftvjI0OKA

When people tel you who they are, believe them pic.twitter.com/GvVYl8S5EB

It’s important for us to be aware that this is where many Democrats are mentally now. Remember this going forward. pic.twitter.com/C6u2pXgayb

If they think they were angry then, wait until they realize the new justice in the photo believes in the radical concept that the Constitution means what it says it does — and that she likely isn’t  going anywhere for a long while.

C. Douglas Golden is a writer who splits his time between the United States and Southeast Asia. Specializing in political commentary and world affairs, he’s written for Conservative Tribune and The Western Journal since 2014.

C. Douglas Golden is a writer who splits his time between the United States and Southeast Asia. Specializing in political commentary and world affairs, he’s written for Conservative Tribune and The Western Journal since 2014. Aside from politics, he enjoys spending time with his wife, literature (especially British comic novels and modern Japanese lit), indie rock, coffee, Formula One and football (of both American and world varieties).