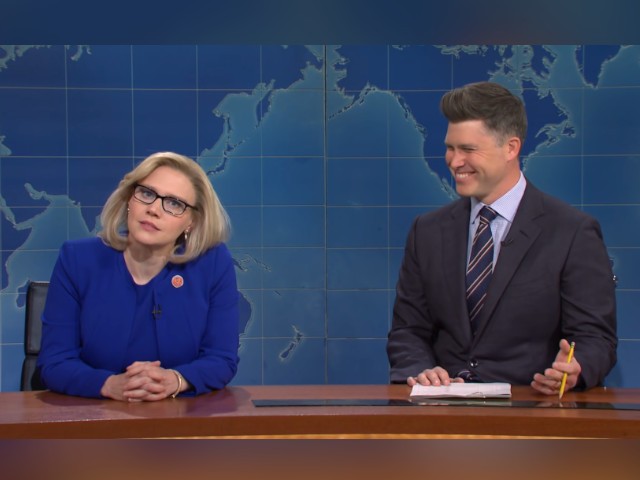 Saturday Night Live (SNL) mocked Rep. Liz Cheney (R-WY) in its May 15 episode, depicting her as an unlikeable oddball appealing only to a fringe of elitist Republicans, despite her months of virtue signaling to leftists by trashing former President Donald Trump.

A “Weekend Update” segment mercilessly kicked Cheney while she is down, focusing on her recent removal as House Republican Conference Chair.

“I was kicked out of the Republican Party,” said the Liz Cheney character, played by series regular Kate McKinnon. “I fell down to hell like Lil Nas X, fracked with the devil, and bounced back up onto MSNBC.”

“The Republican Party is changing,” McKinnon’s Cheney character continued. “I don’t know what happened. I don’t know what I did wrong. Look at me, I am everything a conservative woman is supposed to be: blonde, mean…”

“But Colin, it’s going to be okay, because people are on my side,” McKinnon continued, speaking to SNL’s Colin Jost, who sat beside her during the skit.

“Brave Republicans ready to speak the truth and start a movement,” McKinnon’s Cheney character insisted. “And there are more of us than you think. It’s me, Adam Kinzinger, Chris Wallace, Dick Cheney, Ann Romney, her horses, Colin Jost — fingers crossed.”

“Are you sure?” McKinnon replied. “Because it’s going to be me, George Conway, Nancy Reagan’s ghost, Meghan McCain — it’s not in, but I’m working on her — it’s Jared…”

“No, Subway,” the Cheney character answered. “Colin, this is the grand implosion of Trumpism. You don’t even know the size of the tsunami that’s coming. We’re talking me, Omarosa, five white women, maybe six. Have I said me?”

McKinnon’s Cheney character went on to say that she doesn’t understand why conservatives are leaving her “high and dry,” because she “opposed gay marriage,” tried to “take away protections for gray wolves,” and even shoots “buffalo in the ass.”

“I know, Colin, I know. It’s not great,” McKinnon said. “Conservatives are leaving me high and dry. And what more can I do for you people? I opposed gay marriage, even though my own sister is a les. I even tried to take away protections for gray wolves… I shoot buffalo in the ass.”