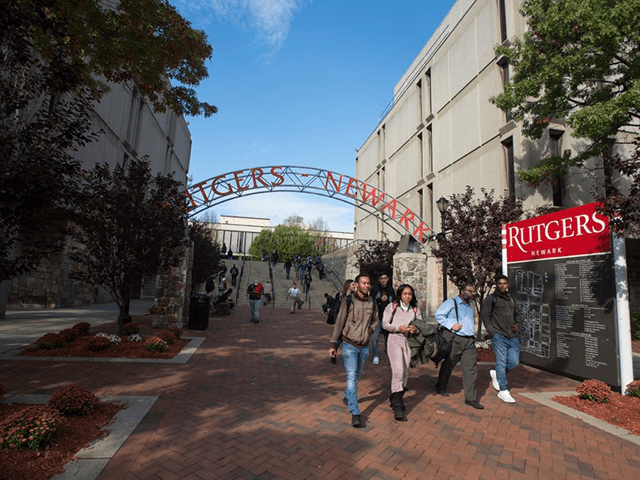 Following protests from the radical anti-Israel Students for Justice in Palestine (SJP) group, the chancellor and provost of Rutgers University issued an apology for a previous condemnation of antisemitism, promising to be “more sensitive and balanced” in the future.

On Wednesday, amid a worldwide surge in attacks against Jews, the leading New Jersey university’s Chancellor Christopher Molloy and Provost Francine Conway condemned antisemitism, stating they were “saddened by and greatly concerned about the sharp rise in hostile sentiments and anti-Semitic violence in the United States.”

“Recent incidents of hate directed toward Jewish members of our community again remind us of what history has to teach us,” the statement said.

The statement also noted “increasing violence between Israeli forces and Hamas in the Middle East leading to the deaths of children and adults and mass displacement of citizens in the Gaza region and the loss of lives in Israel.”

In response, the school’s pro-Palestinian Students for Justice in Palestine group released a statement on Thursday demanding an apology while blasting the original statement condemning antisemitism and accusing the university of contributing to “racist efforts of zionists to erase Palestinian identity and existence.”

According to the group, the school’s decision to condemn antisemitism “cannot be separated from widespread attempts to conflate antizionism with antisemitism and derail Palestinian voices and activism.”

“The statement released by Chancellor Molloy and Provost Conway thus cannot be interpreted as anything other than a deflection from Rutgers University’s role in financially supporting the Israeli state, and thus its human rights abuses and occupation of Palestine, by direct or indirect means,” the group’s statement adds.

Following pressure from the radical anti-Israel group, the chancellor and provost apologized later that day for the initial statement condemning antisemitism, according to the Jewish Telegraphic Agency.

The school’s second statement, apologizing for the first, promised to “make sure that our communications going forward are much more sensitive and balanced.”

“In hindsight, it is clear to us that the message failed to communicate support for our Palestinian community members,” the apology said. “We sincerely apologize for the hurt that this message has caused.”

The pro-Palestinian group followed up by criticizing “Rutgers University’s complicity in the Israeli occupation of Palestine” and demanding a condemnation of Israel for the “250 Palestinian lives have been lost” at its hands.

The group also charged that the initial condemnation of antisemitism “was unwarranted due to the absence of any publicly reported antisemitic incidents in the Rutgers New Brunswick community that had not already been addressed by the administration.”

The school’s decision to retract its original condemnation of antisemitism was met with outrage online.

“How can someone this weak lead a university?” he added.

Under pressure, the Rutgers chancellor *apologized* for condemning the surge of anti-Semitic violence.

How can someone this weak lead a university? https://t.co/8pd1nRFOkD

“This is gross,” wrote Jerusalem Post diplomatic correspondent and senior contributing editor Lahav Harkov. “The message is that the Rutgers’ administration agrees with SJP that antisemitic attacks are justified if the attacker has a problem with Israel.”

This is gross. The message is that the Rutgers’ administration agrees with SJP that antisemitic attacks are justified if the attacker has a problem with Israel https://t.co/2gThFELHyD via @jtanews

After @RutgersU issued a statement condemning #antisemitism, an anti-Israel group complained. So Rutgers issued a 2nd statement to “sincerely apologize for the hurt” its first message caused.

“You have got to be kidding…,” wrote journalist Miranda Devine.

You have got to be kidding… Rutgers forced to apologize for statement condemning anti-Semitism because it “failed to communicate support for our Palestinian community members.” https://t.co/pJXdrl5aRf

“We call on all donors to stop giving to @RutgersU and all high school students to remove this school from your prospectus lists,” the group added.

🗣🗣🗣 We call on all donors to stop giving to @RutgersU and all high school students to remove this school from your prospectus lists.https://t.co/TbXQnqpApx https://t.co/OCY744g5nm

“Yeesh… Anyone heading to the US for higher education, beware!” wrote author Jaideep A. Prabhu.

Rutgers University chancellor apologises for condemning rise in antisemitism: https://t.co/08kZPqfHbV | Yeesh… Anyone heading to the US for higher education, beware!

“No, you are NOT hallucinating,” wrote Simone Rodan-Benzaquen, director of American Jewish Committee (AJC) Europe.

No, you are NOT hallucinating. Chancellor of Rutgers University-New Brunswick sent out an email condemning angisemitism and after being criticized sent another email apologising, saying it needed to be more “balanced”🏻‍♀️🏻‍♀️🏻‍♀️ https://t.co/fqJrHTLRuD

On Saturday, after much backlash, both of the school’s statements began redirecting to a newly improvised one claiming it did not apologize “for standing against anti-Semitism,” while going on to state, “Anti-Semitism, anti-Hinduism, Islamophobia and all forms of racism, intolerance and xenophobia are unacceptable wherever and whenever they occur.”

Students for Justice in Palestine, which is notorious for its anti-Israel crusade on college campuses where the group peddles the radical Boycott, Divestment, Sanctions (BDS) movement, has led anti-Jewish hate campaigns on campuses throughout the U.S. and has affiliations with Islamic terrorist groups, according to an extensive report by the Jerusalem Center for Public Affairs (JCPA) think tank.

The group is featured on Israel’s list of six banned U.S.-based BDS-promoting organizations.

Last year, Students for Justice in Palestine’s University of Florida’s chapter posted several hateful messages on social media accusing “Zionist forces” of engaging in an “ethnic cleansing” of Palestinians between 1947 and 1949.

The group previously came under fire after they were accused of hurling antisemitic remarks at a campus guest lecturer from the Israeli Defense Force (IDF).