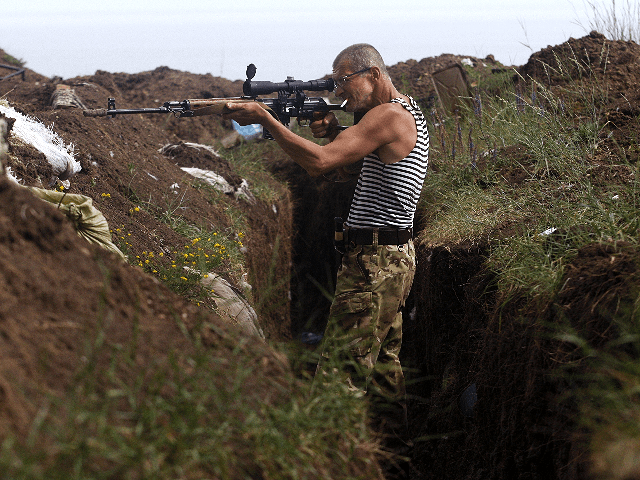 Russia on Wednesday declined multiple offers to renew a tenuous ceasefire with Ukraine over the ongoing war in Donbass, eastern Ukraine.

The move immediately preceded a Russian troop buildup on their mutual border and a series of Ukrainian reports alleging Russian violations of the ceasefire, still in effect at the time.

Russia’s delegation to the Trilateral Contact Group (TCG), a diplomatic entity representing Russia, Ukraine, and the Organization for Security and Co-Operation in Europe (OSCE), reportedly declined proposals from the other two parties to ensure a continued ceasefire in Donbass as of April 1st, Ukrainian outlet UNIAN reported Wednesday.

Donbass, situated on the Russo-Ukrainian border, has been host to a civil war since 2014 between Moscow-backed Russian separatists and the Ukrainian military. The outbreak of war was concurrent with Russia’s invasion and annexation of the Crimean Peninsula. Unlike in Crimea, where Russia claims sovereignty, Moscow has attempted to distance itself from separatists in eastern Ukraine, particularly after they shot down a commercial airliner in 2014.

Ukraine’s delegation leader, Leonid Kravchuk, introduced a plan “to ensure, from 00:00 on April 1, compliance with the full and comprehensive preservation of the ceasefire regime, the gross violation of which by the Russian side last week claimed the lives of four Ukrainian servicemen.” Alleged Russian snipers killed four Ukrainian troops on March 26th and wounded two others.

Kravchuk’s proposal received support from the OSCE, but Russia refused. It further declined proposals from the OSCE.

The TCG imposed a ceasefire beginning July 27th, 2020. Wendesday’s meeting was to reaffirm the TCG’s commitment to peace in Donbass and renew the agreement. The failure to do so, however, has little practical consequence in light of the documented frequent violations of the ceasefire by Russian separatists. Ukraine reported multiple Russian attacks on the first day of the 2020 ceasefire, UNIAN noted.

On Wednesday, as the TCG met to discuss prolonging the ceasefire, Ukraine reported five independent violations from the Russian side and yet three more in the early hours of Thursday.

The failure to renew the ceasefire, along with the uptick in attacks and a significant Russian military buildup on its border, has prompted concerns of an impending escalation of the conflict.

Kremlin spokesman Dmitry Peskov spoke to reporters Thursday morning to address the Russian troop movements. He attempted to assuage concerns while still confirming the reports. He asserted that the internal movement of troops was solely the prerogative of Russia.

“The Russian Federation transfers the Armed Forces on its soil as it wants to. This should not concern anyone and this is not posing any threat to anyone,” Peskov stated. He insisted Russian troops were not participants in the Ukrainian conflict.

Peskov did say that Russia was taking “all the necessary measures to ensure security of its frontiers,” one of which is directly adjacent to the Donbass. There are no active military conflicts on any of Russia’s other borders.

The press conference concluded with Peskov sending a warning to Kyiv, implying that a military flareup in Donbass would likely result from Ukrainian provocations rather than any Russian involvement.

“And we, the European countries and all world states would not like the civil war in Ukraine as a result of provocations and provocative steps by Ukraine’s military to flare up again,” Peskov said.

Ukraine, however, seems to anticipate the opposite. UNIAN reported on Tuesday that the Ukrainian Armed Forces were fortifying their defences to counter any major Russian escalations of the conflict.

The Donbass region, and much of southern Ukraine, first came under Russian suzerainty in 1654, via the Pereyaslav Agreement in which the Zaporozhian Cossacks, who occupied the area at the time, became autonomous vassals of the Russian Tsar. The deal sparked a war with Poland, against which the Cossacks were in rebellion, and ultimately resulted in the partition of the area between the two powers.

The region became part of an independent Ukraine in 1991, after nearly 350 years of Russian rule.