Postal Service Is Running a ‘Covert Operations Program’ to Spy on Americans: Report


The U.S. Postal Service might be spying on you.

In a bombshell expose, Yahoo News reported Wednesday that it had come into possession of a “Situational Awareness Bulletin” that was issued on March 16 by the U.S. Postal Inspection Service — the mail agency’s law enforcement arm — describing its involvement in a secret surveillance program called the Internet Covert Operations Program whose purpose is to track and collect information about Americans’ online activity.

According to that bulletin, the clandestine program enlists analysts who trawl social media platforms — specifically including “right-wing leaning Parler and Telegram accounts” — to identify “inflammatory” posts ahead of planned protests.

The two-page document explains that “inflammatory posts” are those that “suggest [that] potential violence may occur,” even though “no intelligence is available to suggest the legitimacy of these threats.”

The Postal Service then forwards these posts to other government agencies.

The bulletin obtained by Yahoo had to do with demonstrations planned for a “World Wide Rally for Freedom and Democracy” on March 20, at which protesters demonstrated against several causes, including implementation of 5G technology and COVID-related lockdowns. 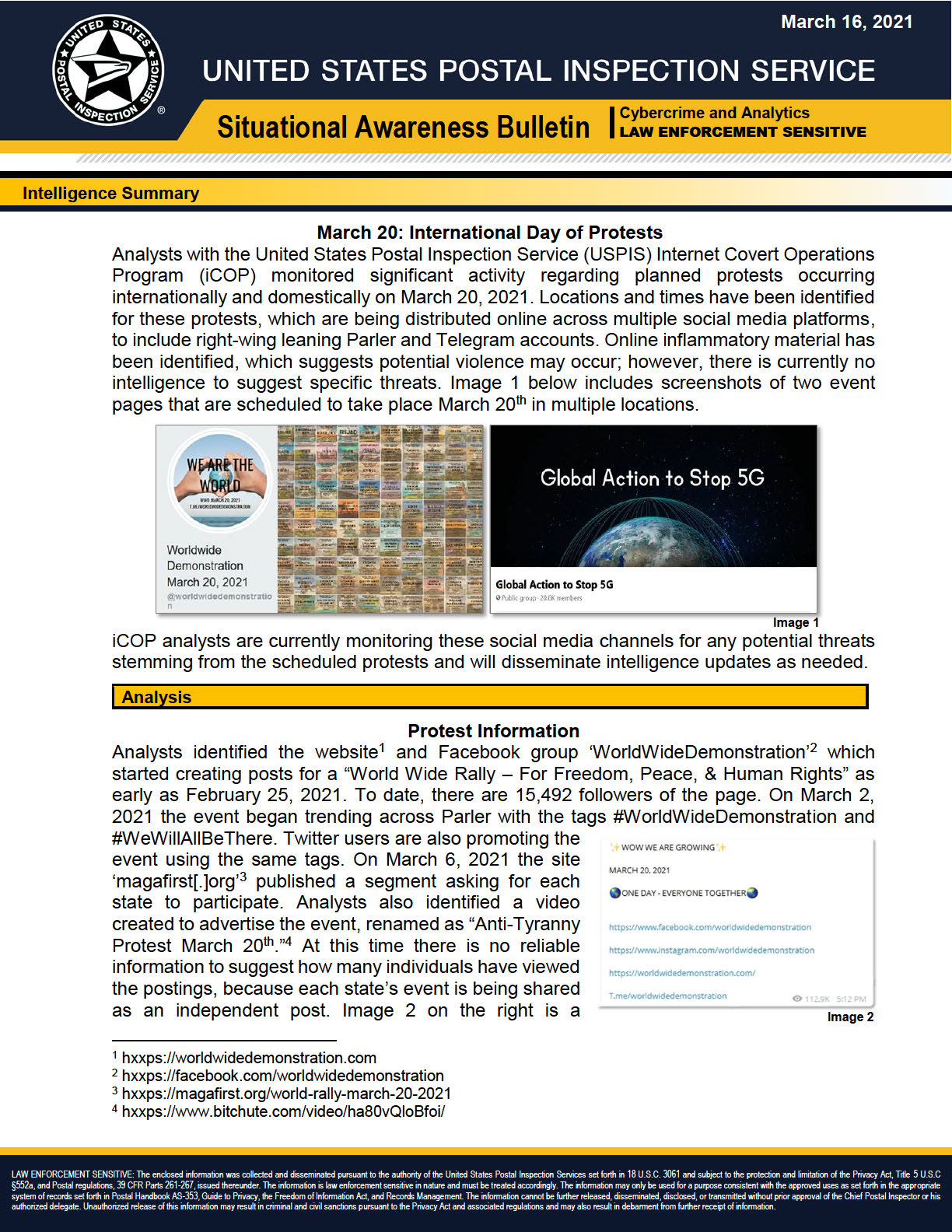 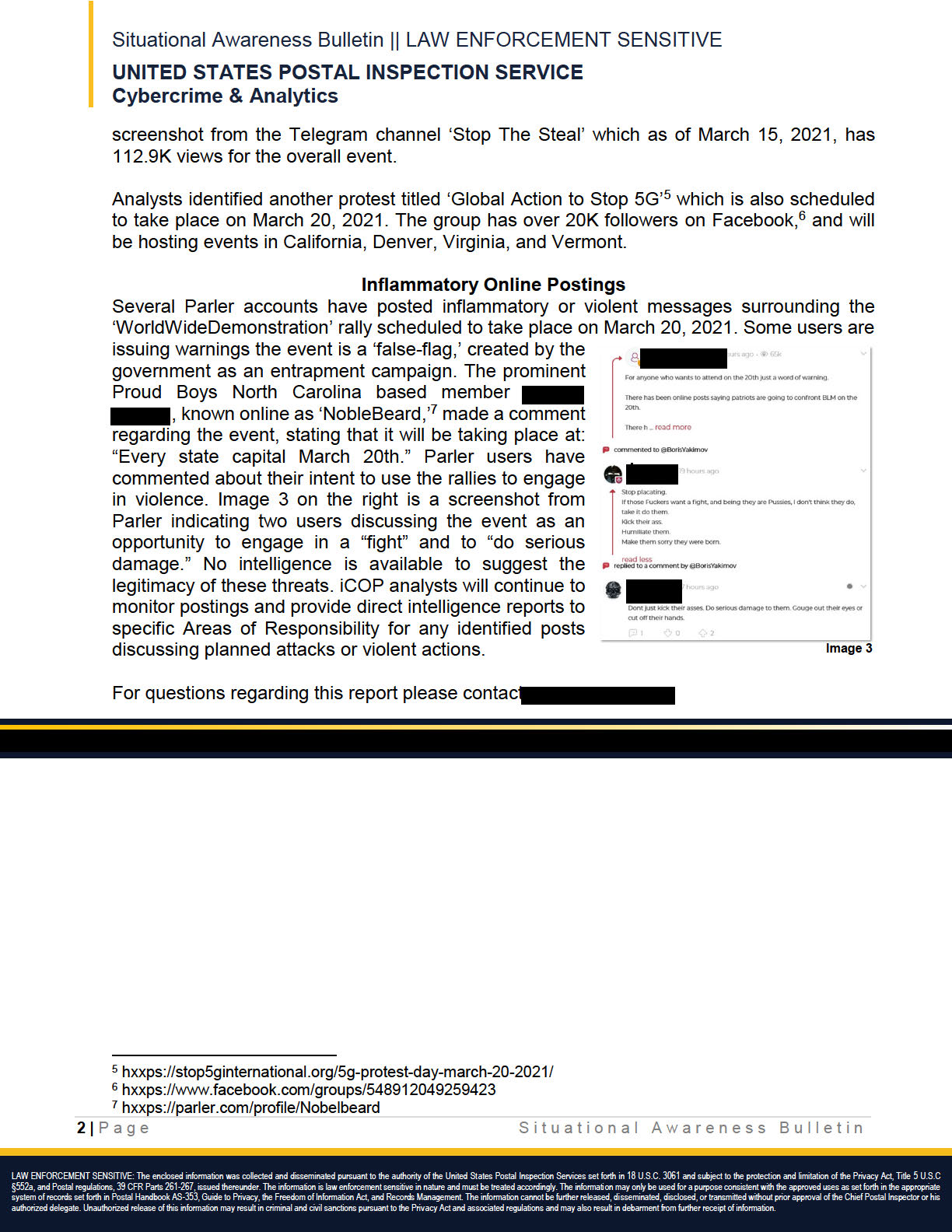 According to the USPIS bulletin, the protest had been promoted by politically conservative groups and was characterized as a “MAGA” and “anti-tyranny” event.

Is Biden using the Postal Service to spy on conservative groups?

Under the heading of “Inflammatory Online Postings,” the memo referenced a screenshot from Parler where two users discussed that there might be an opportunity at the protest to “do serious damage” and to engage in a “fight” with BLM agitators who might show up.

In the same section, however, the bulletin mentions the fact that a “prominent Proud Boys North Carolina based member” who goes by the name NobleBeard had posted that the World Wide Rally for Freedom and Democracy would be taking place in “every state capital” on March 20.

What NobleBeard had posted was neither threatening nor inflammatory, however. It seems to have been included under the “Inflammatory Online Posting” category simply because its author’s profile on Parler lists him as a “4th degree PROUD BOY.”

But even if NobleBeard is a member of the Proud Boys — and it’s not clear he is, since his Parler profile states that “this profile is satire” — government surveillance based on First Amendment-protected activities such as non-threatening speech or membership in an organization is glaringly unlawful.

The real question is why the government would use the Postal Service — rather than the FBI or the Department of Homeland Security — to scour social media for security threats that have nothing to do with the delivery of mail.

Given that the Postal Service is facing financial insolvency, it seems illogical for the government to further strain the cash-strapped agency’s resources by tasking it with conducting online surveillance of activities falling outside of its jurisdiction.

According to the Yahoo report, the Postal Inspection Service acknowledged the existence of the secretive program but deflected when pressed for the basis for its authority to monitor social media activity unrelated to use of the mail system.

In response to that question, it simply said its mission is to “protect the U.S. Postal Service and its employees, infrastructure, and customers; enforce the laws that defend the nation’s mail system from illegal or dangerous use; and ensure public trust in the mail.”

Such a pat answer is unsatisfying, since none of these missions can reasonably be interpreted to include surveilling Americans’ social media activity.

The memo contains language stating that “the enclosed information was collected and disseminated pursuant to … 18 U.S.C. 3061.” But that statute merely empowers the Postal Service to protect property owned or occupied by the Postal Service as well as to enforce laws having to do with “the use of the mails, and other postal offenses.” It certainly does not cover domestic spying.

So why then are they doing it? The answer is likely political payback.

Remember when President Barack Obama used the IRS to target conservative organizations? It seems that Biden has borrowed a page from that playbook, except this time it’s personal.

Critics on the left accused DeJoy of implementing these policies to deliberately prevent tens of thousands of legally cast absentee ballots from timely arriving at elections offices — something that, if true, would have benefited the electoral chances of President Donald Trump, who appointed DeJoy to his position, and damaged Biden’s.

Now that Biden sits in the Oval Office, is it far-fetched to believe that the administration has ordered the Postal Service, in an act of reprisal, to monitor conservative groups and individuals?

Moreover, using the Postal Service avoids giving another black eye to the FBI and NSA — agencies whose reputations were irreparably tarnished after information about their FISA abuses and other illegal surveillance activities came to light.

DeJoy is still the postmaster general, but once Biden’s three nominees to the U.S. Postal Service’s Board of Governors are confirmed, the balance of power will tip in favor of the Democrats — something that DeJoy must be keenly aware of since the board has the power to remove him.

For DeJoy, doing the administration’s bidding may not only be an act of penance but of self-preservation.

There is much yet to be learned about this covert surveillance program and whether it runs afoul of the law.

But one thing we do know is that revenge is a dish best served cold — and, apparently, sometimes by mail.