The honeymoon looks like it’s ending for President Joe Biden.

In a new Rasmussen poll released on Thursday, just 36 percent of likely voters said they approved of the job the president is doing after his first 100 days.

In addition to the success or failure of Biden’s presidency thus far, the poll looked at expectations; 26 percent said Biden’s been a better president than they thought he’d be, 39 percent worse and 33 percent about what they’d expected.

The poll was heavily divided along party lines, although it was another sign the picture isn’t quite as rosy in the polling department as is being painted in the media.

In terms of party affiliation, for instance, 67 percent of Democrats said the first 100 days had been successful.

That compares with 12 percent of Republicans, 74 percent of whom rate Biden’s first 100 days as a failure.

Do you approve of Joe Biden’s performance as president?

Independent voters tended to be leery of the president’s performance; 26 percent said Biden had been successful thus far compared with 44 percent who thought he had failed.

Forty-seven percent of Democrats thought he’d been a better president than they thought he would be, compared with 60 percent of Republicans who thought he’d done a worse job than he expected.

A better way to gauge Biden’s popularity is to look at whether voters thought Biden won the election fairly.

Granted, Rasmussen’s polling is just a single data point among many. However, it’s worth pointing out because you’ve probably seen more than a few headlines like these: 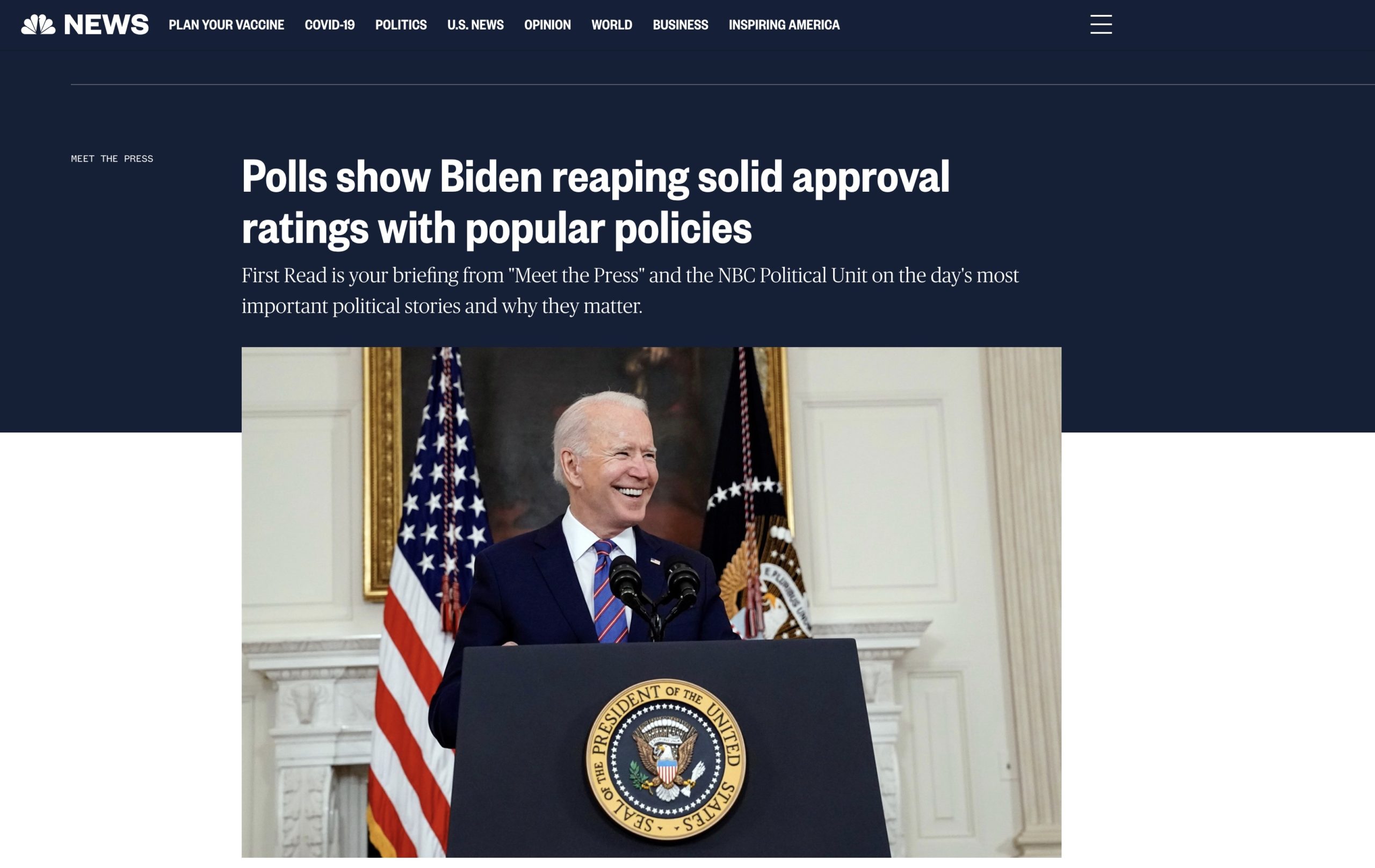 Yes, he’s a smiling, go-getter of a president. Looking at that headline and that picture, you can almost forget Biden is probably trying very hard to remember something here and drawing a blank. (Perhaps where his mask is?)

“It’s a break with former President Donald Trump, whose job rating remained mostly underwater during his presidency, even in his first 100 days on the job.”

Trump’s polling, like Trump himself, was always a love-him-or-hate-him proposition.

This was complicated by the fact you were supposed to hate him.

Whether or not that skewed polling numbers will always be a point of contention, but the fact is his polling was as unique as his presidency.

Look at the picture with a wide-angle lens and Joe Biden actually isn’t doing that fantastic.

According to the RealClearPolitics polling average on Friday, Biden is currently at 53.1 percent approval, 42.1 disapproval. RCP only keeps historical polling averages for the last four presidents, but aside from Trump, that’s well below the first-year polling for Presidents George W. Bush or Barack Obama.

If you want to take an even wider shot of how Biden’s doing, look at just the Gallup poll, which has tracked every president since Harry Truman.

Biden’s approval rating on day 91 of his presidency was 57 percent.

That’s not stellar, given only three presidents had lower approval ratings at roughly the same point after taking office: Trump, Bill Clinton and Gerald Ford.

Ford had just pardoned Richard Nixon by the time his first hundred days were up and Bill Clinton only missed by 2 points — 55 percent — after a disastrous first 100 days which saw two attorney general nominees forced to withdraw and a mounting suspicion taxes would be raised due, in part, to his health care proposals, according to The Washington Post.

Everyone else was more popular during the honeymoon period than Biden is, and this was before the reality of governing set in.

While one could make the argument Biden is suffering from the exigencies of the pandemic, you could just as easily argue he’s getting a bounce because the media have all collectively told us, now that Biden is in office, that we can all exhale and return to normalcy.

In short, if these are the three guys you’re beating among 13 presidents between Harry Truman and Donald Trump in polling after roughly the first 100 days, no, you’re not riding atop a “solid approval rating” with “popular policies.”

Add to this that he’s been polling badly on the situation at the southern border, the first real crisis germane to his administration (and one that’s of his own creation, no matter how much he tries to shirk it).

And what’s distinguished Biden’s first 100 days, anyhow, aside from a vaccination process that arguably wouldn’t have been materially different no matter who won?

A lot of spending, which is popular until the hangover hits and we remember we, like, actually have to pay for it. There’s been the Democrats’ novel interpretation of budget reconciliation that’ll allow them to pass spending bills without the filibuster, talk of doing away with the filibuster anyway Biden can get other bills through the Senate, moves toward packing the Supreme Court and other agenda items that’s won’t go over well with Republicans and independents if they decide to actually go through with this.

This is undistinguished and divisive stuff — and it shows in the numbers, which the media somehow think are fantastic. It’s difficult to look at the Rasmussen poll, where an overwhelming majority of voters — 62 percent — either thought Biden’s first 100 days were a failure or were something in-between. That’s not the unalloyed love Biden is portrayed as enjoying.

As history proves, it only gets harder from here.