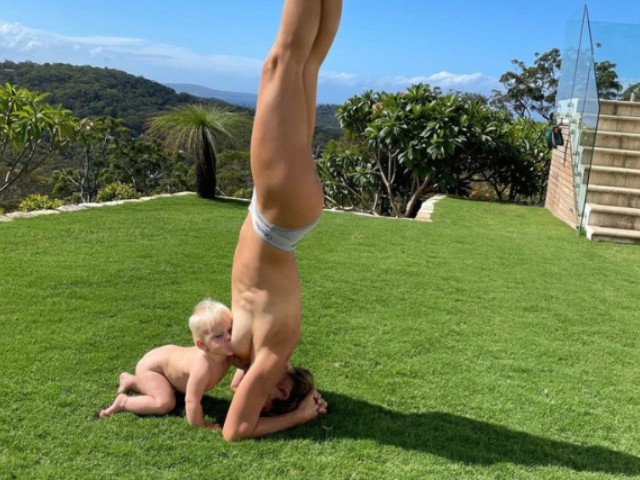 A photo depicting Olympic snowboarder Torah Bright standing on her head while breastfeeding her child has whipped up a firestorm of criticism.

Bright reposted the image on May 9 on Instagram. In the photo, the Olympian is seen wearing nothing but a pair of underwear as her little boy suckles her on his hands and knees. Though, not all fans thought the odd expression of motherhood was appropriate.

Some accused the 2010 halfpipe gold medal winner of being an attention seeker.

Bright responded to the wave of criticism, saying that the comments “made her sad,” the New York Post said.

“Reading some of these comments made me sad,” she wrote.

The 34-year-old athlete added, “In my world, mothers should be each other’s cheerleaders (it’s hard enough). Embrace our quirkiness and finding the joy in every sh—y thing that is motherhood.

“We all do it differently. It is not wrong or right. Motherhood is pure. I only now consider myself a Wonder Woman because I have joined the sacred MOTHERS club with you. Nothing but respect to all mothers,” she continued.

“Love to all mothers who need it right now. I got your back. Every mother has been there. You are not alone. I’m not looking for praise. I never need strangers’ praises. I walk this earth to the beat of my own drum, led by my nutrition and search for love and joy … obviously,” she concluded.

In 2014, Bright became the first athlete to qualify for all three Olympic snowboarding disciplines.