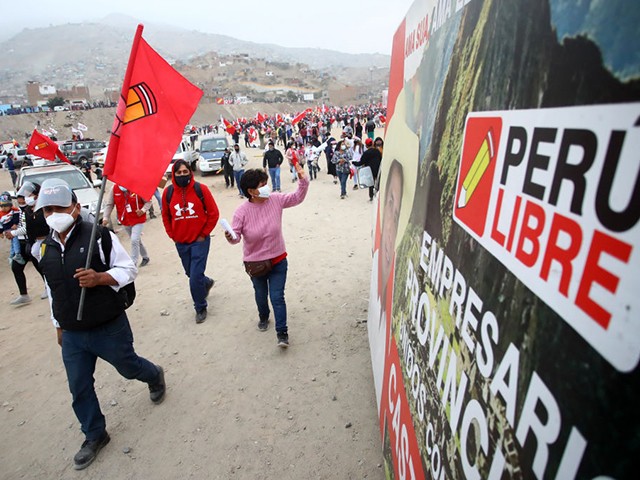 Military officials identified the believed-to-be-defunct Marxist terrorist organization Shining Path on Monday as the party responsible for the massacre of 18 people, including at least four children, this weekend in southern Peru.

Founded in the 1960s and peaking in terrorist activity in the 1980s, Shining Path is a Maoist, communist organization dedicated to the destruction of the Peruvian state. The government of former President Alberto Fujimori captured the group’s leader, Abimaul Guzmán, in 1992, sentencing him to life in prison and effectively ending the Shining Path’s murderous campaign to impose communism on the country. Fujimori famously displayed Guzmán in what appeared to be a zoo cage for large animals, dressed in a cartoonish prison uniform, in an attempt to fully humiliate the group.

Guzmán remains behind bars at 86 years old; Fujimori, at age 82, is also serving a prison sentence, his for alleged human rights abuses during his tenure.

Fujimori’s daughter Keiko is one of two candidates vying for the Peruvian presidency on June 6. She trails communist rival Pedro Castillo by about four percent of prospective voters in the most recent polling published Tuesday. Castillo’s campaign has been plagued by favorable references to Vladimir Lenin by his political party, Free Peru, and accusations of ties to the remnants of Shining Path, which Castillo has denied.

Law enforcement officials in Peru have continued to monitor the remnants of Shining Path following the fall of Guzmán, but have identified them typically as only splinter narco-terrorist groups. The killings on Sunday in Vizcatán del Ene, southern Junín, are much deadlier and more severe than the group’s typical activity. According to police officials, authorities found 18 bodies in the town of San Miguel del Ene. The valley known in Spanish as Valle de los Ríos Apurímac, Ene y Mantaro, or VRAEM, is home to some of the country’s most active illegal coca production.

The victims appeared to have been frequenting a local bar and, at press time, the Peruvian government maintains custody of the bodies, in part because some were burned beyond easy recognition. Most alarming to the rest of the country, the assailants left flyers on the bodies of those killed threatening locals to abstain from voting in the June 6 election.

“Peruvian people: boycott the bourgeois elections because that is not your path,” the flyers read in part, according to the BBC. “Don’t go vote. Leave a blank vote … whoever votes for Keiko Fujimori is a traitor, murderer of the VRAEM, murderer of Peru!”

The Spanish newspaper El País reported Monday, citing remarks made by a Peruvian general in a radio interview, that the faction responsible for the attack is under the control of a narco-terrorist known as Víctor “José” Quispe Palomino known to have ties to the Shining Path. The general, César Astudillo, also stated that the terrorists in question had distributed flyers previously warning of a “social cleansing” of the area of “people who behave in a libertine fashion” and “corrupt people and parasites.”

Peruvian leftists responded to the attack by preemptively attacking Keiko Fujimori. Vladimir Cerrón — the founder of the Free Peru party, former governor of Junín, and the man responsible for the Leninist content in its manifesto — posted several messages on Twitter implying that a resurgence of the Shining Path terrorist group represented a political gift to his candidate’s opponent.

“It is the right who need Shining [Path] to want to win,” Cerrón wrote on Twitter on Monday. In a separate message, he asked, “Is [it] the left who need Shining Path to win elections, or the right? In the end, opponents need each other, the rivals are identical.”

Cerrón has since deleted the posts in question.

In a message condemning the terrorist massacre, Keiko Fuijmori also appeared to address Cerrón’s comments, though she did not name him.

“I also want to express my categorical rejection to the feverish insinuations of some people who, trying to take advantage politically, are pointing [a finger] at people tied to our political coalition,” Fujimori said. “Please, we must not allow these kinds of desperate acts. In front of these attacks, we Peruvians must stand together more than ever.”

A poll by Ipsos Peru found Castillo with a slight increase in support between Monday and last week, Peru’s El Comercio reported Tuesday. Respondents in the poll opted for Castillo by 52.6 percent and Fujimori by 47.4 percent, a difference slightly above the poll’s margin of error. Fujimori remains the favorite in the nation’s capital, Lima, where residents have expressed concerns with Castillo’s Marxist ideology, but has struggled with high disapproval ratings, in part a reflection of her decades in the spotlight. Prior to this presidential run, her third, Fujimori served as first lady under her father following her mother Susana Higuchi’s divorce from and presidential campaign against the elder Fujimori.