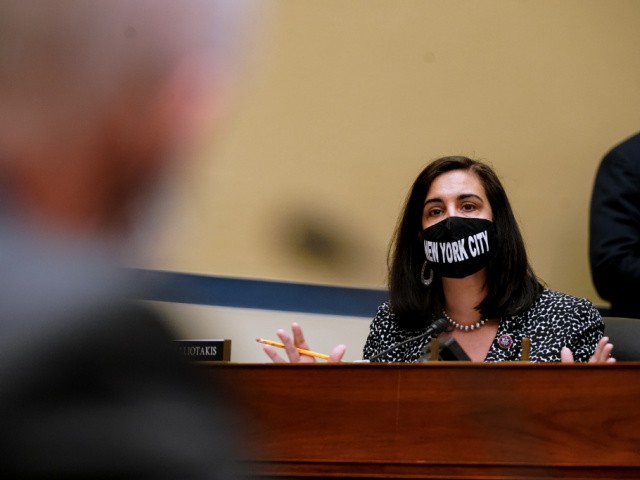 Rep. Nicole Malliotakis (R-NY), one of few Republicans who spoke with President Joe Biden following his joint address to Congress on Wednesday night, urged the president to make a trip to the southern border and show support for the border patrol agents who are working there.

According to Malliotakis’s office, the New York congresswoman spoke to Biden and “urged him to go to the border and support our [Customs and Border Protection] agents.”

Nicole had the opportunity to speak with @POTUS after his #JointAddress . She urged him to go to the border and support our @CBP agents. They also briefly discussed transportation and infrastructure. https://t.co/oCFv7R9sTD

Her office also noted that the two briefly spoke about “transportation and infrastructure,” as Malliotakis could be seen on camera handing Biden an unidentified business card.

During Biden’s address, Malliotakis’s office noted on social media, Vice President Kamala Harris’s unwillingness to tend to the “crisis” at the southern border, a situation she said “is only getting worse.”

.@POTUS just announced he is putting the @VP in charge of part of his jobs plan. He put her in charge of the border and that crisis is only getting worse. #JointSession

“POTUS just announced he is putting the VP in charge of part of his jobs plan,” Malliotakis’s office wrote in a tweet. “He put her in charge of the border and that crisis is only getting worse.”

Her office also highlighted Biden’s Transportation and Infrastructure Bill, saying it could have had “bi-partisan support” if it had been as he described during the address.

“Speaking about infrastructure, @POTUS spoke about roads, highways, pipes, water supply and broadband. If that was just what his Transportation & Infrastructure bill addressed, he’d have full bi-partisan support,” she wrote in a tweet.