As reports of a ceasefire emerged Thursday, a poll showed the majority of Israelis want the current operation against the Palestinian terrorist group Hamas to continue.

According to the survey cited by Israel’s Channel 12 news, 72 percent believe the so-called “Operation Guardian of the Walls” should not end until deterrence is established. That number increases in the south of the country — which is hardest hit by rocket barrages.

A total of 24 percent of respondents said Israel should agree to a ceasefire, with the figure dropping to 22 percent in the south.

Sixty-six percent believe Israel has made greater grounds during this current conflicts with Hamas than previous rounds, but that number plummets to 30 percent for respondents living in the south.

Many Israelis are also insisting a ceasefire not take place until Hamas releases the bodies of IDF soldiers Hadar Goldin and Oron Shaul, which the terror group has held captive since they were killed in Gaza in 2014, as well as releasing Avera Mengistu, an Ethiopian Jew with reported mental health issues who wandered into Gaza in September 2014 of his own accord.

“We must not sign a ceasefire without the return of our boys,” Leah Goldin told Channel 12 news on Thursday. 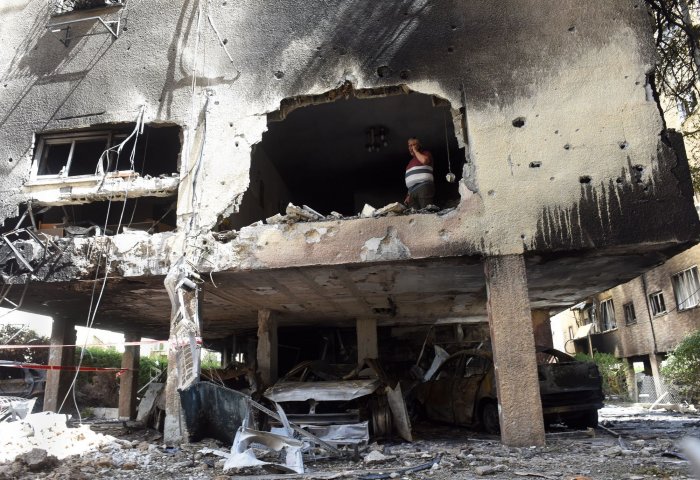 An Israeli man inspects the damage in an apartment building hit by a rocket fired from the Gaza Strip in Petah Tikva, near Ben Gurion International Airport, on Thursday. (Debbie Hill/UPI)

The workers’ union at the Israel Electric Corporation (IEC) said on Thursday they refuse to fix electric lines to the Gaza Strip that were damaged by Hamas rockets that misfired until the bodies of the soldiers and Mengistu are returned to Israel.

“As a sign of solidarity and support for the struggle for the return of the boys, we do not intend to repair and return the power lines to Gaza that were damaged as a result of Hamas firing, until Hadar Goldin, Oron Shaul and Avera Mengistu are returned to Israel,” said the union.

The IEC responded, however, that they are “government company, subject to the provisions of the law, and we believe that electricity is an essential product that is outside the conflict.”

The company added it “hopes the boys are brought home.” 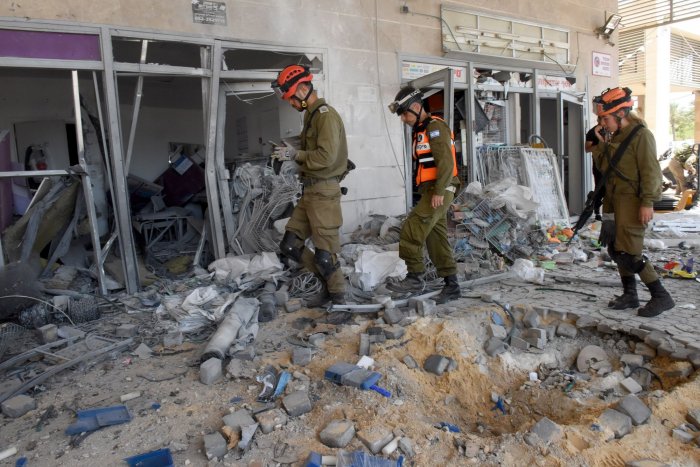 Israeli soldiers look at the damage of a building hit by a rocket fired from the Gaza Strip. (Debbie Hill/UPI)

According to Israeli media, a breakthrough in the ceasefire talks between Egyptian intelligence services and the U.N. envoy to the Middle East is expected over the next 24 hours

After a lull in rocket fire that lasted several hours overnight Wednesday, in the morning fresh rocket barrages pounded Gaza envelope communities as well as the southern cities of Beersheba and Ashkelon.

Hamas announced that it had launched an anti-tank guided missile at an IDF bus. The bus, however, was empty. One soldier standing close to it was evacuated to the hospital after being injured by shrapnel.

Over the last 11 days, Hamas has fired rockets indiscriminately at all Israeli citizens.

In response, we have been precisely targeting the source of terrorism in Gaza—and we will continue to do so.