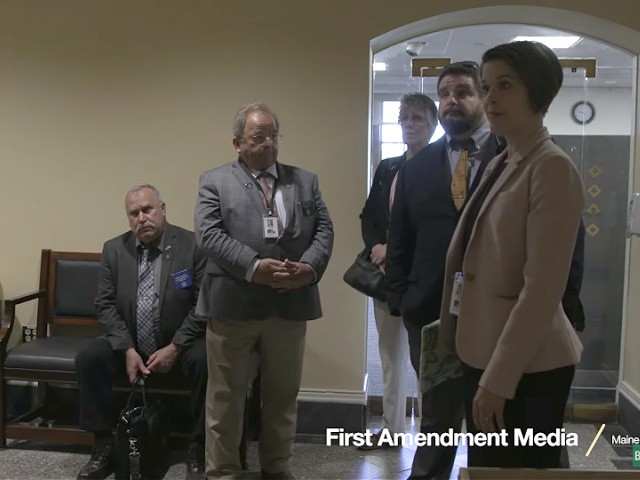 The Democrat speaker of the Maine state House stripped Republican lawmakers of their committee posts Monday after they entered the state House without masks in accordance with the governor’s most recent executive order.

State Rep. Laurel Libby (R) released a video of a confrontation between the seven unmasked Republican lawmakers and a Capitol police officer who told them they are required to wear masks in the state House, even though Gov. Janet Mills (D) released an executive order, effective this week, that ended the state’s mask mandate.

Mills lifted the mask mandate for everyone in the state except children age five or older in school or daycare.

A spokesperson for the governor said that because it is extremely difficult to differentiate between vaccinated and unvaccinated Mainers, and because Mills wanted the same rules to apply to everyone, she decided to lift the mask requirement for everyone, the Associated Press (AP) reported.

Businesses are free to set their own policies regarding masks and social distancing, but such regulations are no longer required by the state.

A video shows an officer explaining the mask mandate to the Republican lawmakers, and the group then going past police and legislative staff to enter the building.

According to AP, despite the governor’s repeal of the mask mandate, the Legislative Council decided to require lawmakers to wear masks in the state House.

State employees are required to wear masks in shared indoor workspaces until at least July 7, according to the state budget commissioner.

“I simply will not tolerate attempts to devolve our institution into showmanship and political theater,” Fecteau said in a public letter to the Maine House lawmakers.

Fecteau subsequently removed the Republicans from their committee posts and replaced them with Democrats — not other Republicans.

Posted by Representative Laurel Libby on Tuesday, May 25, 2021

Yesterday my fellow legislators and I followed Governor Mills’ recent Executive Order making the wearing of masks an individual choice, rather than the Legislative Council’s policy that ignores both the federal and Maine CDC guidelines. We attempted to go to work in the People’s House on behalf of our constituents and were impeded from doing so at the direction of Speaker Ryan Fecteau and other Democrat leaders on the Legislative Council. Apparently Speaker Fecteau only wants to “follow the science” when it is politically expedient.

As a result, I have been stripped of my committee assignment and replaced by a Democrat, rather than one of my fellow Republicans. Speaker Fecteau is not my employer, so he is flexing the only disciplinary muscle he has, outside of calling for my removal. That may well be the next step the Democrat majority attempts, but I have no intention of going anywhere!

“My district elected me to represent them and bring their voice to Augusta, and I will continue to do my job,” Libby stated.