Liberals Tricked Americans Into Being Happier with Less Under Biden


A new survey asked 1,000 Americans what amount of money they would need to be “financially comfortable” in 2021. A net worth of $624,000 is what average Americans thought would do the trick.

Surprisingly, in 2020, the amount was significantly higher: $934,000. That means a full one-third decrease from year to year.

Net worth is determined by adding up the value of all bank accounts, real property and investments and then subtracting any debts, including mortgages, car loans and credit card balances.

The Schwab Modern Wealth Survey is an annual poll of 1,000 Americans ages 21 to 75 that asks about saving, spending, investing and wealth. It canvased people in 12 urban population centers during the first two weeks of February.

“More than 60 percent of Americans surveyed are optimistic about the U.S. stock market, and more than half feel positive about the U.S. job market, economy and role as a global economic power,” it said.

The first question that arises in looking at the data is how much of a role the pandemic played. People who are forced to tighten their belts and live at reduced means would no doubt find a new financial reality for which they felt comfortable.

But the financial reality of most Americans does not match their feelings.

Inflation is at 4.2 percent — a 13-year high — and unemployment now stands at 6.1 percent. Prior to the pandemic, it consistently remained below 4 percent. And home prices are the highest on record, with a minuscule vacancy rate not seen since the 1980s.

Do you feel you need less money to be comfortable than a year ago?

Inflation not seen in 13 years should be increasing, not decreasing, the amount to achieve financial comfort. And it is this financial ignorance that worries economists because history shows what happens after a country leaves a pandemic lockdown.

The Economist completed a review of the financial periods following the 1870 smallpox outbreak in Britain and the 1919-20 Spanish flu outbreak. It found that people saved money at historical rates during pandemics, but when life returned to normal, they were eager to spend their savings.

The amount they had saved seemed to provide a level of comfort. But this comfort may be blinding average Americans to the coming financial troubles.

Huge Gulf Between Men and Women

Another intriguing insight in the Schwab study is the difference between the genders. In analyzing the data, CNBC uncovered that men and women feel quite differently about money.

Apple Abandons Its Own Core Values to Sell Phones in China

Men believe that a net worth of $864,000 would allow them to be financially comfortable, while women responded with an amount less than half that figure: $325,000.

The survey doesn’t offer any explanation about this wide discrepancy, though it does seem to support overall studies on happiness. John Barry, a University College London psychologist, conducted a study of 5,000 American men and found that more than health or relationships, they found their ultimate satisfaction from their work.

It makes sense that men would estimate a higher amount to be comfortable, based upon the importance of work in their lives and the direct connection to salary.

Difference Between Being ‘Comfortable’ and ‘Rich’

There are also differences among being financially comfortable, financially happy and wealthy. The respondents believed one needed to have just under $2 million to be rich. 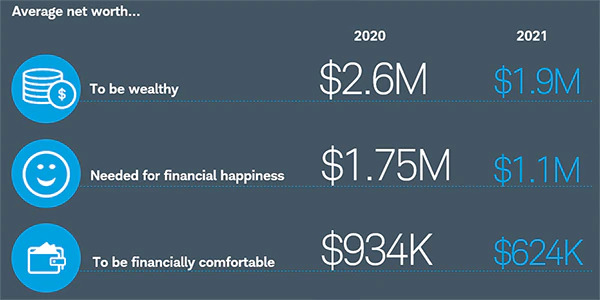 All three categories revealed that it took substantially less money to achieve each financial milestone than last year.

These are uncertain times, and although it is generally a positive sign for Americans to feel good about their financial health, nevertheless there are real warning signs that should give the average person pause.