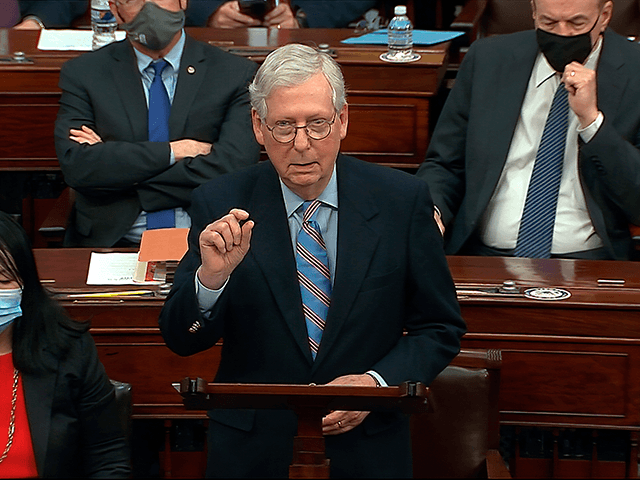 McConnell also wanted to make it clear to President Joe Biden to “remain strong against the growing voices within his own party that create a false equivalence between terrorist aggressors and a responsible state defending itself.”

“Yesterday was the deadliest day yet in the continued fighting between the terrorist forces attacking Israel and Israel’s measured, precise, and defensive response,” McConnell said, standing up for Israel’s right to protect itself against aggression.

The Republican said Hamas has “unleashed another round of rocket barrages, intentionally targeting civilian areas across Israel.” During this time, Israel has had to fight back. In doing so, they have “intensified” their efforts in order to “destroy the terrorist group’s underground networks of weapons storage and command-and-control.”

McConnell continued to say, “No one is glad to see this fighting. But we are already seeing some push the false narrative that this conflict is a tragic dispute between two legitimate combatants where both sides share blame that is roughly equal.”

He took aim at some of his colleagues on the Democrat side by mentioning the ceasefire they have argued for. Over the weekend, Sen. Jon Ossoff (D-GA) led 28 Senate Democrats to call for a ceasefire between Palestinian Hamas terrorists and Israel while Israel has been under attack. The Israeli military said they need more time to neutralize threats from Hamas.

“To say that ‘both sides’ need to de-escalate downplays the responsibility the terrorists have for initiating this conflict in the first place, and suggests Israelis are not entitled to defend themselves against on-going rocket barrages,” McConnell said. He later added, he has completely rejected the “obscene moral equivalence” of having a ceasefire.

Then, McConnell explained another “false narrative” going around from the far-left. McConnell quoted a far-left House member claiming Israel is an “apartheid state” and had committed “an act of terrorism.“

Democrat Rep. Rashida Tlaib (MI) has recently called for Boycott, Divestment, and Sanctions (BDS) of Israel and called it an “apartheid state.” That specific notion about Israel has been debunked multiple times in the past.

McConnell said, “Look, this is not a conflict between Israel and the Palestinian people.” He explained that “Hamas has sought to hijack recent tensions to advance its own narrow, violent objectives.”

In doing this, there is a “conflict between Israel and a terrorist-run state in Gaza that uses its civilian population as human shields, and exploits their suffering for political gain.” McConnell went on:

These terrorists set up shop in apartment buildings and under press offices. They direct rocket attacks from the cover of schools and markets. In the past, when their operatives have been killed, they have passed them off to the international community as civilian victims of Israel.

There are very few countries that spend money on avoiding civilian casualties during a war, and he explained those two are Israel and the United States. McConnell explained, Israel has invested heavily in time and money to confirm who they attack, rather than guessing. He added that Israel even takes the time to give warning before they attack anywhere in Gaza, “even when doing so means the terrorists may also evacuate.”

Earlier Monday, a report came out saying the Biden administration approved the sale of $735 million in weapons to send into Israel, as the nation continues in a daily battle against Hamas terror rockets fired from the Gaza Strip.