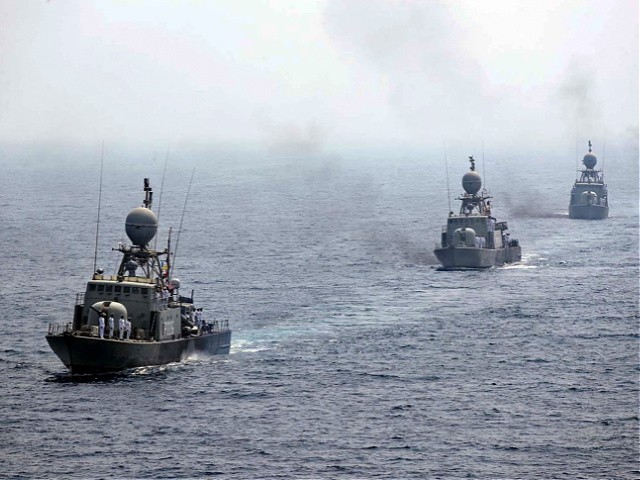 “Earlier today a large group of Iranian Islamic Revolutionary Guard Corps Navy, also known as the IRGCN, fast boats conducted unsafe and unprofessional maneuvers and failed to exercise due regard for the safety of U.S. forces as required under international law while operating in close proximity to U.S. Naval vessels that were transiting the Strait of Hormuz,” Pentagon Press Secretary John Kirby said.

He said the Navy ships that were escorting the USS Georgia were exercising the right of transit passage in accordance with customary international law in the Strait when 13 IRGCN fast attack boats approached the U.S. formation of ships at “high speed,” getting within 150 yards.

He said after a second round of warning shots, the IRGCN ships broke contact.

“There was a volley at roughly the 300 yard mark and then another volley of warning shots as they got into 150 yards,” he said.

The encounter between American and Iranian ships in the region is the third one in the span of just two months.

And just weeks before that, in early April, three IRGCN fast attack boats and a catamaran harassed two U.S. Coast Guard cutters over a period of three hours, prompting one of the cutters to take an evasive turn to avoid a collision, according to USNI News.

Trump had warned in 2016 on the campaign trail as a presidential candidate that Iranian ships harassing U.S. ships and making gestures at American service members would be “shot out of the water.”

Trump also engaged in tit-for-tat strikes with Iranian-backed militias in Iraq in late 2019 after they killed an American contractor on an Iraqi base. Ultimately, Trump ordered a strike that killed IRGC Quds Force leader Qasem Soleimani, who was responsible for the deaths of American troops during the Iraq War.

Some Middle East experts say Iran’s return to regularly harassing U.S. military forces in the region reflects their lack of fear of the Biden administration as it seeks to return to the Joint Comprehensive Plan of Action that lifted economic sanctions on Iran in exchange for limits to their nuclear program.

Republicans have long blasted the JCPOA as weak, and Trump pulled the U.S. out of the agreement in May 2018.

“It was a big show not only for us but for other countries in the region,” said Simone Ledeen, who was the senior defense policy official for the Middle East during the Trump administration.

“The things that are being reported coming out of those meetings [on rejoining the JCPOA] are terrifying. I think that the regime feels extremely confident in its position. They are confident we’re not going to respond. So it’s a flex, it’s a big message, and it’s very disturbing to see that,” she said.

Another expert and former administration official who spoke on background said Iran feared it was possible that Trump would employ force against the Iranian ships.

However, now, Iranians have zero fear President Joe Biden would ever use force — particularly given his decision not to respond to Iranian proxies killing an American contractor in Iraq as well as his efforts to rejoin the JCPOA, the former official said.

The Biden administration decided not to strike the group responsible for the contractor’s death in Iraq, but to take out some buildings that the group allegedly used in Syria. The Pentagon said some members of the militia were killed but estimates were blurry.

This, as well as Biden’s efforts to rejoin the JCPOA and infuse the regime with cash, sends a green light to harass U.S. forces in the region without fear of retaliation, the former official said.