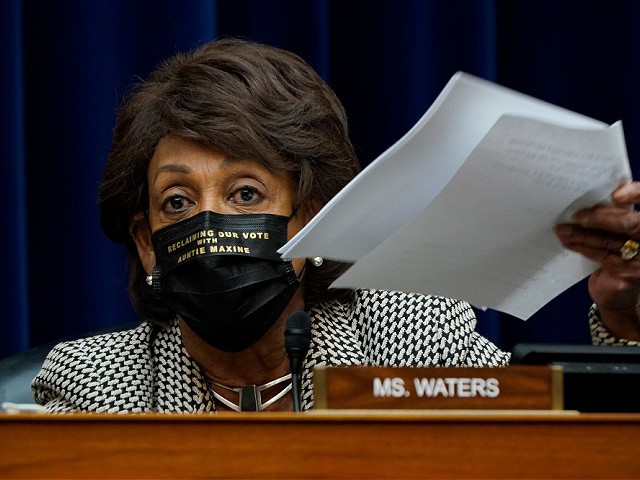 McCarthy said that if Pelosi does not act, he intends to take action of his own against Waters for her remarks encouraging violence in Minnesota if a jury does not find former Minneapolis police officer Derek Chauvin guilty in his trial in the death of George Floyd.

Maxine Waters is inciting violence in Minneapolis — just as she has incited it in the past. If Speaker Pelosi doesn’t act against this dangerous rhetoric, I will bring action this week.

Waters, in her remarks to reporters at a protest in Brooklyn Center where thousands have been protesting the death of Daunte Wright, encouraged people to “take to the streets” if Chauvin is not found guilty of murder — one of the several charges he faces in his trial in Floyd’s death, which is expected to conclude this coming week.

“We’re looking for a guilty verdict,” Waters said. “And we’re looking to see if all of the talk that took place and has been taking place after they saw what happened to George Floyd, if nothing does not happen, then we know that we’ve got to not only stay in the street, but we’ve got to fight for justice. But I am very hopeful, and I hope we are going to get a verdict that says ‘guilty, guilty, guilty.’ If we don’t, we cannot go away.”

Maxine Waters is marching in Brooklyn Center tonight and told people to take to the streets if Chauvin is acquitted pic.twitter.com/RemfvCCLAn

“I have no sympathy for these people that are in this administration who know it’s wrong for what they’re doing on so many fronts,” Waters said when Trump was president. “They tend to not want to confront this president or even leave, but they know what they’re doing is wrong. I want to tell you, these members of his cabinet who remain and try to defend him, they won’t be able to go to a restaurant, they won’t be able to stop at a gas station, they’re not going to be able to shop at a department store. The people are going to turn on them. They’re going to protest. They’re going to absolutely harass them until they decide that they’re going to tell the president, ‘No, I can’t hang with you.’ This is wrong. This is unconscionable. We can’t keep doing this to children.”

It is unclear if Pelosi will do anything about this latest iteration of Waters advocating extreme measures for political purposes, but if she resists holding Waters — who is the chairwoman of the powerful House Financial Services Committee — accountable, it remains to be seen what McCarthy can do from the minority to hold Waters accountable.