First Lady Jill Biden journeyed to California on Wednesday in a visit to a pop-up vaccination site for farmworkers designed to encourage others to join the national mass coronavirus vaccination program.

Video of her effort to speak Spanish to around 100 farm workers during the stop in Delano attracted almost as much attention as the flag that provided the backdrop. It came on the birthday of César Chávez, a left-wing labor leader, and she was joined by California Gov. Gavin Newsom.

“It’s ‘Si se puede’ (Yes you/we can) not ‘Si se pwadueh,’” RGA Deputy Communications Director Joanna Rodriguez tweeted. “I can’t even imagine what word she was trying to say. Seriously why even try pandering if you’re going to butcher it and not practice before?!”

Others were quick to join the commentary:

Me to my high school Spanish cohorts when we’re sitting down to the final without studying at all. pic.twitter.com/LENk5LRzBQ

“Si se what???? I’m sure some one will surely tell Jill Biden ‘puadray’ is NOT a word in the Spanish dictionary,” Journalist Dania Alexandrino, a native Spanish speaker, tweeted. “For those who are celebrating her effort, yeah NO! Very far from ‘Si se Puede’ which means ‘Yes (we) can.’ We in parenthesis because it can also be yes you can!”

The Daily Wire reports the clip soon went viral prompting journalists and commentators to question the red and black flag used as a backdrop.

Critics claimed it appeared to resemble Nazi imagery and the Reichsadler (Eagle of the German Empire), national insignia of Nazi Germany, flown from 1935 until 1945.

The flag was in fact nothing of the kind and the allegation wrong.

Rather it is the official flag of the United Farm Workers of America. The organization asserts the eagle featured on the standard was designed by César Chávez’s brother, Richard Chávez. 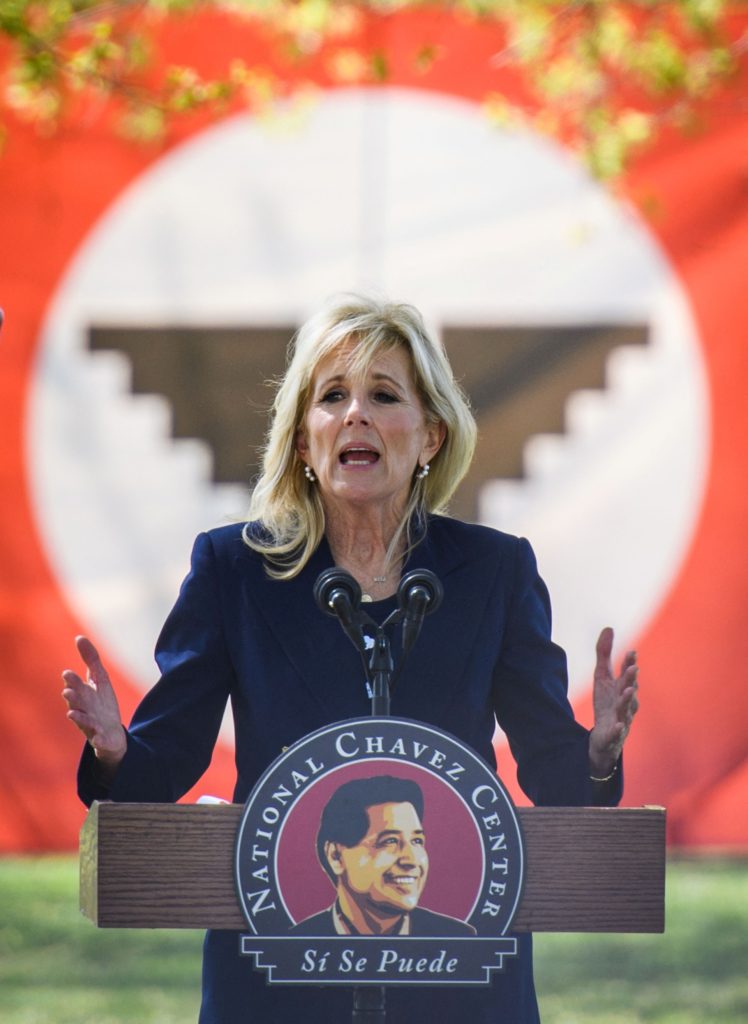 U.S. First Lady Jill Biden speaks during her visit to The Forty Acres, the first headquarters of the United Farm Workers labor union, in Delano, California on March 31, 2021. (MANDEL NGAN/POOL/AFP via Getty Images)

César Chávez co-founded the United Farm Workers of America (UFW) union and was a staunch opponent of illegal immigration, as Breitbart News has previously reported.

Even so, just hours before Jill Biden spoke President Joe Biden was also doing his best to contribute to the political makeover of the anti-migration, pro-American, labor-rights hero.

As Breitbart News reported, the president pushed the left-wing makeover in a March 31 statement, saying: “I was proud to place a bust of César Chávez in the Oval Office, so that no one who enters that historic room may forget the powerful truths his farm worker hands imparted.”