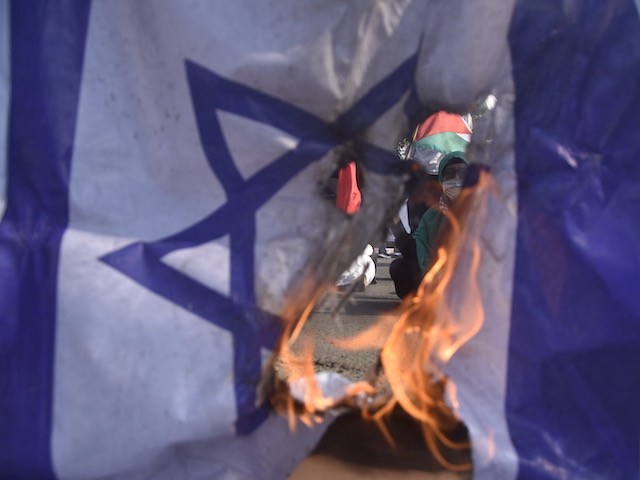 Jewish House Democrats sent a letter urging President Joe Biden to appoint a “United States Ambassador-at-Large to Monitor and Combat Anti-Semitism” and condemning the comments made by their House colleagues.

Rep. Josh Gottheimer (D-NJ), Rep. Elaine Luria (D-VA), and Kathy Manning (D-NC) all signed onto the letter, first obtained by Punchbowl News, saying they are “deeply disturbed by the recent surge of antisemitic incidents in the United States.”

The group of Democrats said they believe there needs to be a united front in order to “combat rising antisemitism in this country.” The Democrats explained, surge in the last few weeks all over the United States, “including attacks on Jewish Americans in New York, California, and Florida.”

In Times Square, a group yelling antisemitic slurs viciously beat, kicked, and pepper-sprayed an unsuspecting Jewish man. In Los Angeles, a caravan of pro-Palestinian protestors descended on a restaurant in West Hollywood, demanding to know “who’s Jewish?” before unleashing a violent attack on diners while yelling antisemitic slurs. In Bal Harbour, a Jewish family visiting from New Jersey, was harassed by four men in an SUV shouting, “Free Palestine, f— you Jew, die Jew.” In Tucson, Arizona, an individual threw a rock through a glass window, vandalizing Congregation Chaverim. Jews across the United States are facing an extraordinarily tense environment of fear and insecurity.

The group said people are looking to find a scapegoat for the recent conflict in the Middle East, and it is undeniably the reason for the increase in antisemitic incidents as Jews are blamed for the conflict.

“Given that Jews in Europe and around the world have faced a similar increase in threats in recent weeks coinciding with the conflict, the group added. This is why they are arguing Biden “to swiftly nominate an experienced and qualified United States Ambassador-at-Large to Monitor and Combat Anti-Semitism.”

The group had also pointed out, representatives have recently been “accusing Israel of being an ‘apartheid state’ and committing ‘act[s] of terrorism.’” They continued to add that statements like the ones recently heard by members of congress are “antisemitic at their core” and have “contribute to a climate that is hostile to many Jews.

“We must never forget that less than eighty years ago, within the lifetime of our parents and grandparents, six million people were murdered by the Nazis in the Holocaust because they were Jews,” they had added. “Israel has long provided the Jewish people with a homeland in which they can be safe after facing centuries of persecution.”

They claimed that learning from history, “when this type of violence and inflammatory rhetoric goes unaddressed, it can fuel increasing hatred and violence, and lead to unspeakable acts against Jews.”