Japan On The Brink of Population Collapse?

He said his country is “on the brink of not being able to function as a society because of its falling birth rate,” according to BBC.

Is this depopulation playing out before our eyes?

Low birth rates and high excess deaths are a recipe for population decline.

Is Japan becoming one of the quickest nations to witness the effects of the depopulation agenda?

JUST IN 🚨 Japan’s prime minister says his country is on the brink of not being able to function as a society because of its falling birth rate. – BBC

NEW – PM warns Japan is on the brink of being unable to function as a society because of its falling birth rate.https://t.co/yIYLFzd6UW

Birth rates are slowing in many countries, including Japan’s neighbours.

But the issue is particularly acute in Japan as life expectancy has risen in recent decades, meaning there are a growing number of older people, and a declining numbers of workers to support them.

Japan now has the world’s second-highest proportion of people aged 65 and over – about 28% – after the tiny state of Monaco, according to World Bank data.

“Focusing attention on policies regarding children and child-rearing is an issue that cannot wait and cannot be postponed,” Kishida said.

Excess deaths contribute to the dilemma.

Japan seeks to return to normal, plans to DOWNGRADE COVID to flu status, and wants to stop counting Covid deaths.

In the USA, deaths in Japan would be equivalent to 1,100 deaths per day. https://t.co/U9Bc1k0YJg pic.twitter.com/bDZvkavsqB

From The Daily Sceptic: 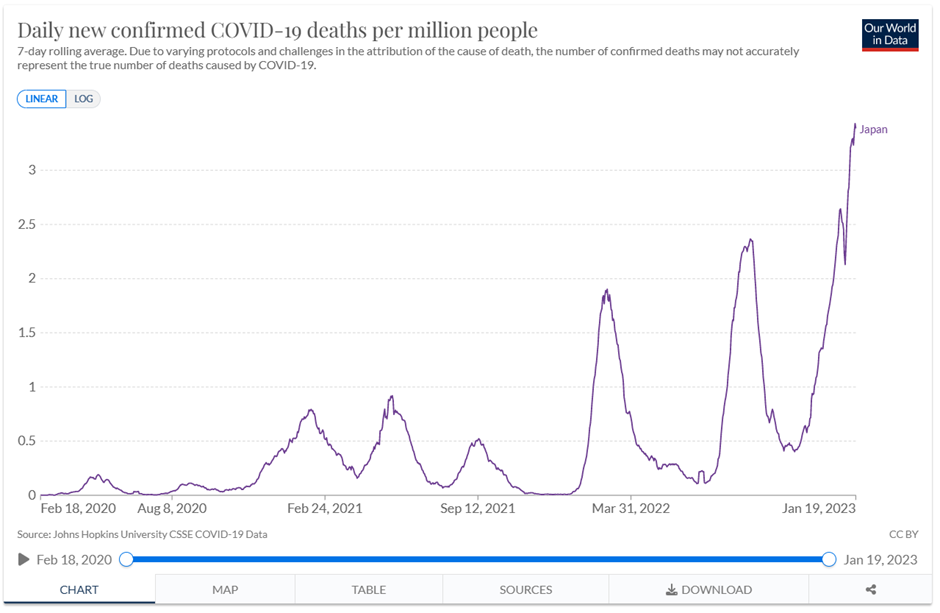 *Image from The Daily Sceptic*

Weren’t the COVID-19 jabs supposed to prevent deaths from the pathogen?

They’ve had the opposite effect in Japan and COVID-related deaths have skyrocketed into 2023.

According to Our World in Data, around 82% of the Japanese population is ‘fully vaccinated’ against COVID-19.

Fortunately, some Japanese doctors are finally asking questions about the safety risks of the experimental injections and demand a proper investigation.

He’s a bit pissed off. Good.

Can Japan reverse this dire trend?

That’s the question that remains to be answered.