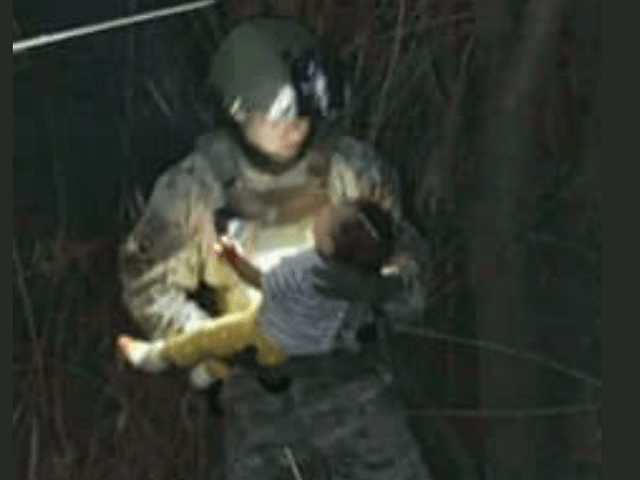 A Texas Ranger worked with U.S. Border Patrol agents to rescue a six-month-old migrant girl after human smugglers threw her into the Rio Grande near Roma, Texas. The infant’s mother had reportedly been assaulted by the smugglers in Mexico and sustained a broken leg.

Texas Department of Public Safety (DPS) officials posted a photo on Facebook showing a Texas Ranger holding an infant girl after she was rescued from the river that separates the U.S. and Mexico. Officials say human smugglers threw the six-month-old girl out of a raft and into the Rio Grande on March 16.

The DPS South Texas Special Operations Group, Texas Rangers Division, assisted U.S. Border Patrol agents in the rescue effort. The report indicates the mother of the child sustained a broken leg after being assaulted by human smugglers in Mexico.

It is not clear why the smugglers threw the child into the river. Breitbart Texas reached out to Border Patrol officials for additional information on the rescue. An immediate response was not available.

On Tuesday, Breitbart Texas published a leaked video detailing the dramatic rescue attempt of a nine-year-old migrant child who drowned while attempting to cross the Rio Grande near Eagle Pass, Texas, on March 20. Despite the heroic efforts to resuscitate the child, doctors later pronounced her to be deceased at a hospital.

Del Rio Sector Marine Unit agents came upon a small island in the middle of the Rio Grande near Eagle Pass, Texas, on March 20. The agents found three people unconscious on the island where they became stranded while attempting to cross from Mexico into Texas, according to information provided by Del Rio Sector Border Patrol officials.