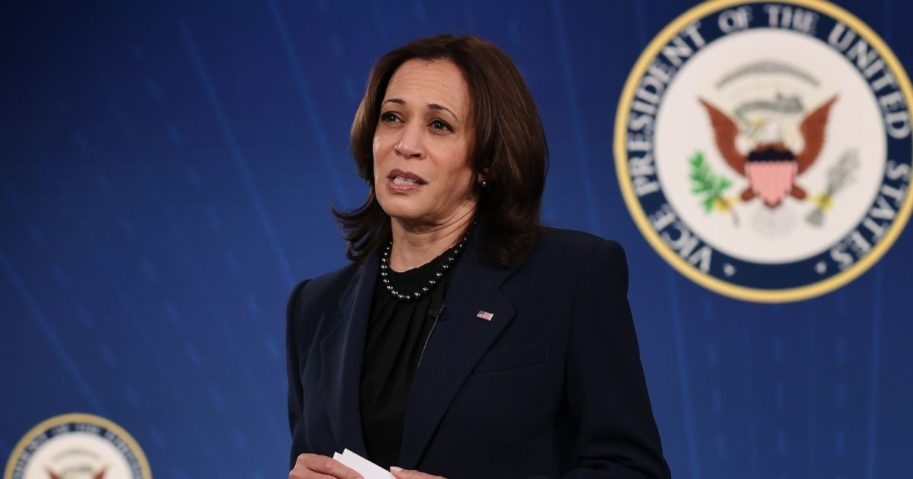 Have you seen this woman?

Vice President Kamala Harris has never been one to be shy — the politician who’s now only a heartbeat away from the presidency without winning a single vote can’t be short of moxie.

But when it comes to one of the most serious crises currently facing the country, Harris has been AWOL, and at a news conference on Wednesday, House Republicans found a dead-on way to mock her for it.

House Minority Whip Steve Scalise, a regular target of liberal loathing, brought a milk carton emblazoned with Harris’ picture – a bygone method of publicizing the faces of missing children that has become a cultural byword for any individual missing in action.

And in the case of the vice president, who has ostensibly been placed in charge of managing President Joe Biden’s administration’s handling of the illegal immigration crush on the southern border, the analogy couldn’t be more apt.

Since Biden announced his VP’s new portfolio at a March 24 news conference, Harris has neither visited the border she’s supposed to be overseeing nor even held a news conference to explain to the American people exactly what steps are being taken to bring the crisis under control.

In short, she’s out of the picture. And that makes the picture on the milk carton picture-perfect.

Are Democrats trying to change the electorate with illegal immigration?

“If she’s the vice president of the United States and the president put her in charge of this, Vice President Harris needs to go down to the border and see this for herself,” Scalise said at Wednesday’s news conference, according to Fox News.

“Because maybe she would then encourage President Biden to reverse his policies that have failed.”

In 2021, the priorities of the Democratic president seem to be entirely undoing the work of his predecessor in the Oval Office. And since one of President Donald  Trump’s many accomplishments was establishing a semblance of sanity on the southern border, clearly the Biden administration is intent on creating the opposite condition.

Almost as soon as he was sworn into office, Biden halted funding for construction of the Trump border wall. Within weeks, he’d issued executive orders to reverse Trump policies on processing immigrants seeking “asylum.”

RELATED: Kamala Harris to Travel to Mexico and Guatemala, But Continues to Ignore Southern Border

And after those steps resulted in an utterly predictable crush of illegal immigrants mainly from Mexico and Central America (with a few foreign nationals from further afield whose names are on terrorist watch lists), disaster ensued.

Now the vice president Biden has delegated to clean up the mess is doing an excellent public impression of doing nothing about it — Harris has now gone three weeks without a news conference on the topic and has found time to do just about anything but pay a visit to the border crisis zone she’s supposed to be on top of.

On social media, the liberal cesspool of Twitter was full of leftist grumbling over the GOP illustration, but there were quite a few who got both the joke and the point.

She’s a joke just like the fraud in office.

@VP is a Failure

Have you seen this woman?

Known to laugh hysterically; claims to be a government official.https://t.co/39YhgfgOr5 pic.twitter.com/yGlyj6J8J0

And though Harris held a “roundtable” discussion on the immigration problem and announced Wednesday that she plans to travel to Mexico and Guatemala to look into the “root causes” of illegal immigration, according to Fox News, those are not exactly the kind of concrete steps that would solve the immediate problem of hundreds of thousands of illegal aliens crossing the American border with impunity — many of them young, single men, others of them children unaccompanied by adults and destined to become dependents of the American people.

In fact, the chances are very good that Wednesday’s roundtable, and any trip south of the border Harris eventually makes, will amount to exactly nothing in the way of solving the problem the way Trump did.

Because for Democrats, illegal immigration isn’t a problem to be solved. It’s a situation to be processed, bringing as many illegal immigrants as possible into the country in the hope that they — or their families — will become Democratic voters at some point in the future.

Meanwhile, Harris is missing in action, and likely to stay that way in any meaningful sense.

And the GOP prop made the point perfectly.