Hong Kong May Discard Vaccines Due to Low Demand 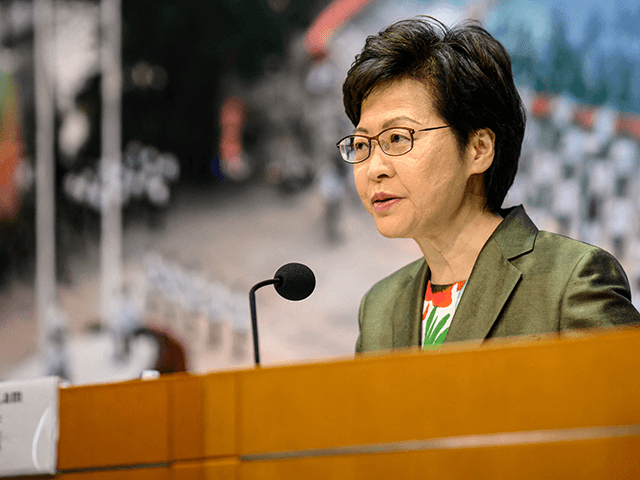 Hong Kong’s Beijing-backed Chief Executive Carrie Lam predicted on Tuesday that residents of the city were so hesitant to receive doses of vaccine candidates for Chinese coronavirus that offering to pay them for it would not change their minds.

The warning, a rejection of proposals by local Hong Kong officials to combat vaccine hesitancy, followed reports that Hong Kong may have to discard large numbers of vaccine candidate doses soon to expire after failing to convince locals to take them.

“We couldn’t even pay people to get jabs,” Radio Television Hong Kong (RTHK) paraphrased Lam as telling her Executive Council.

“To offer cash or something physical to encourage vaccination shouldn’t be done by the government and may even cause the opposite effect,” Lam said. Lam suggested that private company drives to offer free products or cash rebates would likely be more successful, a concession that much of Hong Kong’s vaccine hesitancy is due to lack of trust in the government.

Hong Kong experienced nearly two years of incessant protests against Lam and her pro-communist administration after Lam attempted to pass a law that would have allowed China to extradite anyone present in Hong Kong if accused of violating Chinese Communist Party laws. Under the “One Country, Two Systems” policy, China has no power to enforce its laws in Hong Kong. Beijing did away with “One Country, Two Systems” this May with the illegitimate passing of a “national security” law that sentences political dissidents to a minimum of ten years in prison.

Lam encouraged private companies to offer financial incentives for coronavirus vaccination as her officials warned that millions of vaccine doses may end up discarded and unused as Hong Kong residents fail to make appointments to receive them. According to the Agence France-Press (AFP), Hong Kong officials purchased 7.5 million doses of the vaccine by the American company Pfizer and another 7.5 million of the Chinese-made “Coronavac.” Both require two doses and the numbers correspond to the about 7.5 million people estimated to live in Hong Kong. AFP noted that only about 14 percent of the population is currently fully vaccinated and most of the doses in question expire in September, meaning the government has about three months to convince most of the population of Hong Kong to get vaccinated, an unlikely goal for them to meet.

RTHK noted that the number of fully vaccinated Hongkongers is about one million people. For comparison, a single protest in June 2019 attracted 2 million people.

Vaccine concerns intensified after a series of deaths and hospitalizations of Hong Kong residents following the administration of doses of Coronavac, the least effective coronavirus vaccine candidate in widespread global use currently. Most of those who died after receiving their shots were senior citizens and some had chronic medical issues before the vaccinations. Officials insisted the deaths were few and likely unrelated to the vaccination, but Hong Kong’s decision to allow the administration of Coronavac to senior citizens, particularly when China had not, raised suspicions. The deaths triggered a significant decline in the number of people making appointments to get vaccinated as well as an increase in the number of people who had received one dose and simply did not show up for their second.

Concerns about the efficacy and safety of Coronavac, by the Chinese firm Sinovac Biotech, have exacerbated the problem. Coronavac has tested to be only 50.38 percent effective in preventing coronavirus infections, compared to the 95-percent effectiveness rate of the Pfizer product. Health workers in Hong Kong have openly encouraged people to seek out the Pfizer product, resulting in government retribution in at least one case where a clinic lost its privilege to administer vaccines after stating that Coronavac had a “bad reputation.”

Even the few who have opted to get vaccinated are showing signs of significant fear – among them a spike in business for lawyers in the city who specialize in drafting final wills and testaments, according to RTHK.

“They told me they already made appointments for the vaccine. They came to my office to write a will. Maybe they have some worries about the effect of the vaccine,” Wong Tai Sin district councillor Bruce Liu told the broadcaster.

In a sign that it does not expect interest in the vaccine to increase, Lam’s government announced on Tuesday it would expand the pool of eligibility for the vaccine to Chinese citizens who regularly commute to Hong Kong and those in the process of claiming refugee status.

“The new measure will allow around 40,000 mainland [China] residents who are in the city – for a variety of reasons from tourism to family reunions and job training – to receive their jabs at local vaccination centres from Friday, while over 13,000 refugees and asylum-seekers will be eligible to do so in July,” the Hong Kong Free Press (HKFP) reported. That number remains significantly lower than the number of doses Hong Kong possesses, potentially resulting in the disposal of those vaccine doses or their sale or distribution to other countries.