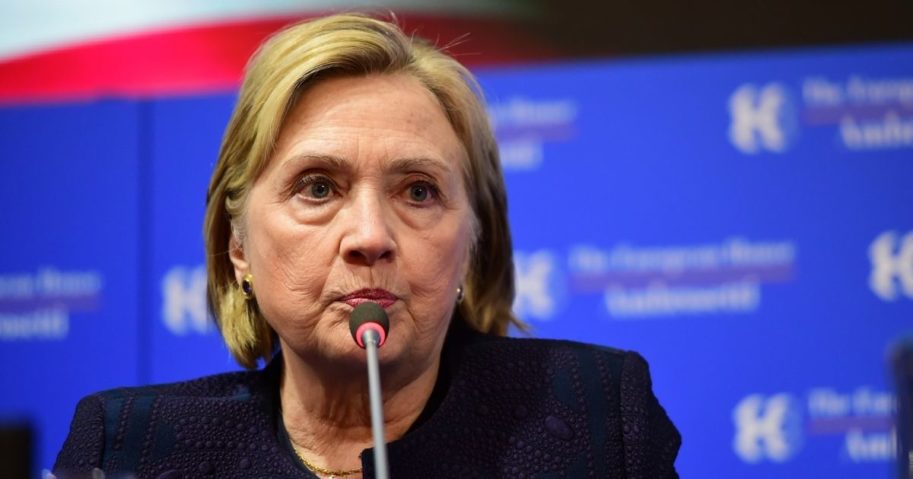 Failed Democratic presidential candidate Hillary Clinton, whose gun control platform was resoundingly rejected in the 2016 presidential campaign, is attacking Republicans for not doing as she says.

Clinton teed off on Republicans in an interview with Jennifer Palmieri, who was the former secretary of state’s campaign spokeswoman in 2016 when former President Donald Trump defeated Clinton.

“You know, democracy is the balancing of interests and rights, and unfortunately at this time, the gun worshippers have a huge advantage because of the filibuster and because of their shameless exploitation of people’s unwarranted fears,” Clinton said.

We talk so much about the right to bear arms in America. @HillaryClinton wants to change the narrative.

What about the rights of everyone else? The right to go to work, to school, or to the grocery store without fear?

“The opportunists on the other side, like Cruz and his ilk, they know better. And they are in the position of trying to keep people really riled up and scared that sensible gun legislation like we had in the ‘90s for 10 years will somehow undermine their rights,” she said.

Clinton then lumped herself in with average Americans whose rights are allegedly being infringed upon.

And this is why Hillary Clinton lost , over half of Americans are gun owners , We enjoy our second Amendment and wish to keep it. We don’t have that right so we can hunt, we have that right so if the Government gets out of control we can take it back. https://t.co/0idQT5enL8

Your right’s do not interfere with my right’s. Sorry but I cherish my 2nd Amendment.

A spokesman for Cruz told the Washington Examiner on Wednesday that Democrats “want to take away the Second Amendment rights of law-abiding Americans.”

“It’s unfortunate they would rather pander to their liberal base than pass bipartisan legislation like Grassley-Cruz and actually help reduce mass shootings in our country,” the spokesman added.

Cruz has called for action on a 2013 proposal he co-authored with Republican Sen. Chuck Grassley of Iowa that would criminalize straw purchases and upgrade the FBI background check system.

White House press secretary Jen Psaki said Tuesday that the administration is “working on a couple of levers” to enact gun control legislation and that those include possibly working with Congress, according to CBS News.

“Concealable assault-style firearms that fire rifle rounds pose an unreasonable threat to our communities and should be fully regulated under the National Firearms Act consistent with the intent and history of the law,” the Democrats’ letter read.

“The recent tragedy in Boulder, Colorado where 10 people including a police officer were killed is one in a string of deadly incidents involving this style of weapon.”

Will Democrats jam gun control through the Senate?

Democrats have also urged the Senate to vote on two gun control bills that passed the House.

“In the 20 days since the House passed these common-sense gun violence prevention measures, Americans of all ages across the country have lost their lives to gun violence, and their families, friends, and communities have had their lives forever shattered,” the letter continued.

“In honor of those who have been murdered in their workplaces, grocery stores, and neighborhoods since March 11 and the generations of Americans lost to gun violence, the Senate must act and bring H.R. 8 and H.R. 1446 for a vote.”