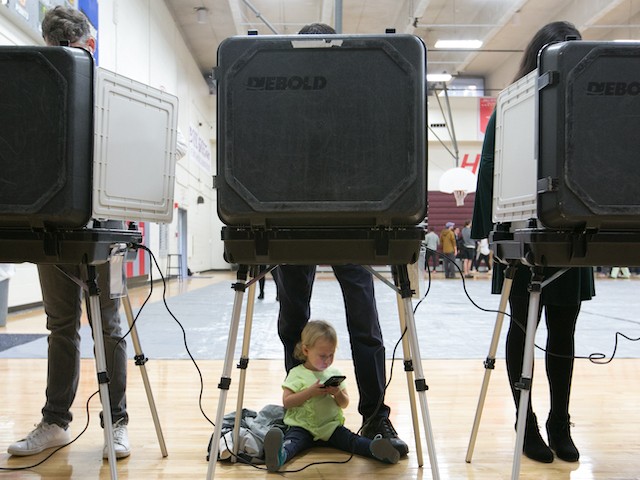 The left has continued to mischaracterize the SB 202, which Georgia Gov. Brian Kemp (R) signed into law last week, ushering in basic election integrity measures such as requiring a valid ID to vote via an absentee ballot. However, influential Democrats, including President Joe Biden and Senate Majority Leader Chuck Schumer (D-NY), have continued to spread a series of falsehoods regarding state election integrity efforts across the nation, as well as the Georgia law specifically. Schumer even called such proposals “one of the greatest threats we have to modern democracy in America.”

Heritage Action has continued to address the narrative and released a “Myth vs. Fact” sheet combating the top myths touted by Democrats. The organization identified the voter suppression narrative as one of the primary myths and explained the Georgia bill “actually preserves or expands ballot access in several important ways,” including by increasing the mandatory days for early weekend voting:

It requires that large precincts with lines more than an hour long take steps like adding voting machines and election personnel for the next election to reduce wait times. It does not change the number of total early voting days, and actually increases the mandatory days of early weekend voting. Compared to 2020, 134 of 159 counties will offer more early voting hours in future elections under the new law. It codifies election drop boxes, which did not exist prior to 2020. Voters can continue to vote absentee with no excuse(unlike states like Delaware, New York, and Connecticut, which require an excuse to vote absentee).

Democrats also claim the law eliminates “Souls to the Polls,” suppressing minority votes, but this, again, is false. Heritage Action explained the Georgia law “was silent on Sunday early voting days prior to SB 202, and in 2020 only 16 of 159 counties offered early voting on Sundays.” In reality, the law “explicitly provides the option of holding early voting on two Sundays for all localities,” thereby increasing mandatory days of early weekend voting.

Heritage Action also tackled the myth of Georgia “suppressing” votes with new voter ID requirements, noting the vast majority of registered voters, 97 percent, already have a valid form of identification and adding that one can be obtained for free.

“The voter ID requirement replaces the state’s controversial signature match program that led to the disqualification of thousands of votes in 2020,” the organization said, noting the tremendous popularity of the voter ID requirement for absentee ballots among Peach State voters, with nearly three-quarters of Georgia voters supporting it, including 63 percent of black voters.

The organization also tackled the critiques over drop boxes for absentee voting, reminding voters the drop boxes used in 2020 did “not exist a year ago.” Under SB 202, they become an official part of Georgia elections, available across all counties and under supervision.

Other myths debunked, via Heritage Action:

Myth 5: The bill lets Republicans throw out any county votes they don’t agree with
FACT: The bipartisan State Election Board can do performance reviews of local election supervisors who fail their area’s voters with things like long lines and unfulfilled absentee ballot requests. The board will not overturn election results; the law simply provides a process to review and ensure officials are technically competent and complying with state laws and regulations . This process requires a high burden of proof over multiple elections, and the State Elections Board may only suspend up to four election supervisors at any given time, which guards against using this process to try to influence election outcomes.

Myth 6: The bill bans drinking water for voters while waiting in line
FACT: Like the countless other states that have very specific laws against electioneering near polling places, Georgia has codified rules preventing political groups from handing out food or water to voters in line as an incentive to vote, but specifically allows poll workers to make water available to anyone who wants it. The law will also directly cut down wait times, meaning refreshment for people waiting in line will be less necessary.

FACT:
– The State Election Board will now have a nonpartisan chair
– The Board will not overturn results, but review county’s competency and compliance of laws and regulations to ensure smooth elections

Nonetheless, leftists are continuing to urge influential persons and entities to fight against state election integrity efforts. Dozens of black business leaders recently signed a letter, urging corporations to use their influence to sway lawmakers.