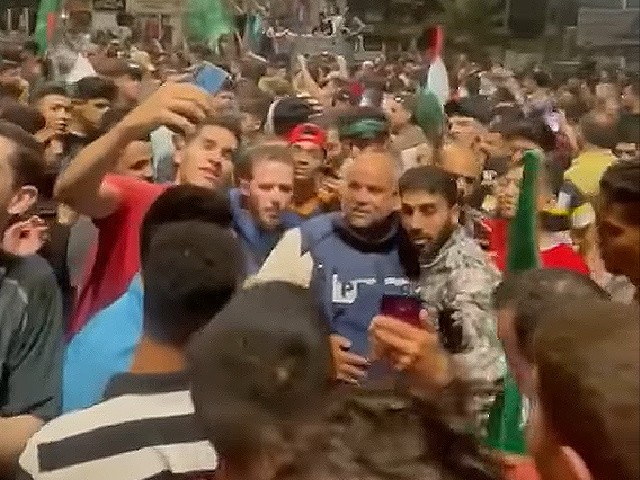 In a video posted on the Al-Jazeera Network’s official Facebook page on Friday, the channel’s senior Gaza correspondent Wael Al-Dahdouh was greeted with applause and cheers by crowds in the coastal enclave celebrating the Hamas terror organization’s “victory” following a ceasefire with Israel after the terror group launched over 4,000 rockets at civilian population centers throughout the Jewish state.

The video shows Al-Dahdouh being embraced by crowds of cheering Palestinians, some shaking hands and others taking selfies with the Al-Jazeera “celebrity.”

Washington had received intelligence from Israel concerning the terror group’s use of the Gaza high-rise.

Shortly before the strike, Al-Jazeera aired a phone call between the owner of the tower and an Israeli intelligence officer.

Al-Dahdouh, who worked in the building, said he was given thirty minutes to gather his belongings.

The IDF reportedly watched as Hamas and the Iran-backed Islamic Jihad terror groups utilized the warning time to remove objects — possibly munitions — from the building.

Other videos posted by the senior Gaza reporter appear to show the smiling Al-Dahdouh being lifted onto the shoulders of participants to the delight of the cheering crowd.

One clip received nearly 250,000 views as of Monday morning, and many on social media expressed support for the Qatari media outlet.

Speaking with the Britain-based Middle East Eye (MEE), Al-Dahdouh stated, “Regardless of why Israel bombed the building, we reaffirm that we will continue to do our job, fulfil our duty and deliver the message, even if we have to do it from the street or the car or any other place.”

Al-Jazeera has a history of anti-American and antisemitic programming, has been accused of promoting jihadist sentiment, and has been banned in numerous countries.

CIA documents linked to the raid on Osama bin Laden’s hideout in Pakistan revealed that the al-Qaeda terror chief praised Al-Jazeera as a potential ally.

In 2019, congressman Jack Bergman wrote that “Al Jazeera’s record of radical anti-American, anti-Semitic, and anti-Israel broadcasts warrants scrutiny from regulators to determine whether this network is in violation of US law.”