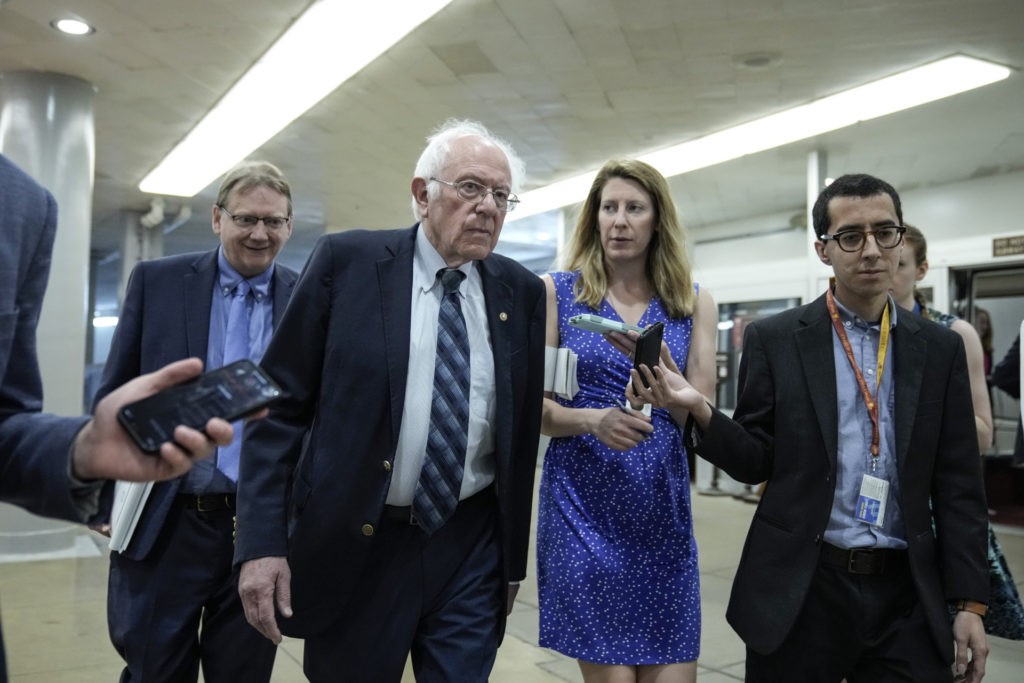 Sen. Bernie Sanders (I-VT) is urging his Democrat counterparts to refrain from spending time “negotiating” with Republicans on key legislative issues, warning that America will slip into a dark era hallmarked by an intensifying “climate crisis” and conspiracy theories if Republicans regain control of Congress.

The Democrat socialist outlined his position in a Thursday op-ed titled, “We should not waste time on never-ending negotiations with Republicans,” in which he declared, “What happens in Congress in the next few months will determine the future of our country — and our planet.”

Democrats, he argued, have proposed pieces of legislation that he believes will protect the planet and “save American democracy from right-wing extremism,” touting several far-left agenda items. Those include raising the minimum wage to $15 an hour, turning the energy system away from the fossil fuel industry, making universal child care a reality, passing paid family and medical leave, making public colleges and universities “free,” passing the far-left voting legislation such as H.R. 1, and vehemently pursuing amnesty for 11-22 million illegal aliens residing in the country.

In Sanders’ mind, the left’s “progressive and popular” agenda would “guarantee that Democrats not only retain control of the House and Senate but expand their majorities in both bodies next election cycle.” This is why, in part, Sanders does not believe Democrats should “waste time” negotiating with Republicans.

But what happens if Democrats go forward in a different direction? What happens if they spend week after week, month after month “negotiating” with Republicans who have little intention of addressing the serious crises facing the working families of this country? What happens if, after the passage of the vitally important American Rescue Plan — the Covid-19 rescue package signed into law by President Biden in March –the momentum stops and we accomplish little or nothing?

Without strong and ongoing accomplishments that improve the lives of working families, there is a strong possibility that Republicans will win the House or the Senate or both bodies next year. The American people want action, not never-ending “negotiations” and obstructionism, and they will not come out and vote for a party that does not deliver.

And if the Republicans do regain control of Congress, we can be sure that the economy will move steadily forward toward a system in which the rich get richer thanks to increased corporate domination. We can be sure that the climate crisis will intensify, diminishing the likelihood of our children and grandchildren living in a healthy and habitable environment. We can be sure that our government will drift away from democracy, as voter suppression, dark money and conspiracy theories continue to dominate our political system.

The Vermont senator vowed to do everything in his power as Chairman of the Senate Budget Committee to “enact a reconciliation bill that reflects the main tenets of President Joe Biden’s transformational agenda, an agenda that millions of Americans want and need in these difficult times” and concluded that the future of the country is “at stake.”

While Sanders continually poses himself as a champion of the working man while casting his political rivals as apologists for the wealthy and powerful, his purported demands in his personal life are not reflective of that, as reported by Breitbart News’s John Nolte on Thursday:

Already, according to this Fox News report and a new book, Uncle Bernie is a perfect example of this galling hypocrisy. His travel demands rival what we’ve seen from the most spoiled and entitled rock stars.

It is not immediately clear how Sanders justifies his purported demands — particularly his preference for private jets despite his position that the planet faces an “existential threat” due to climate change — with his apparent desire to be revered as a champion of the working class.