DHS Is for Migration, Not Homeland Security 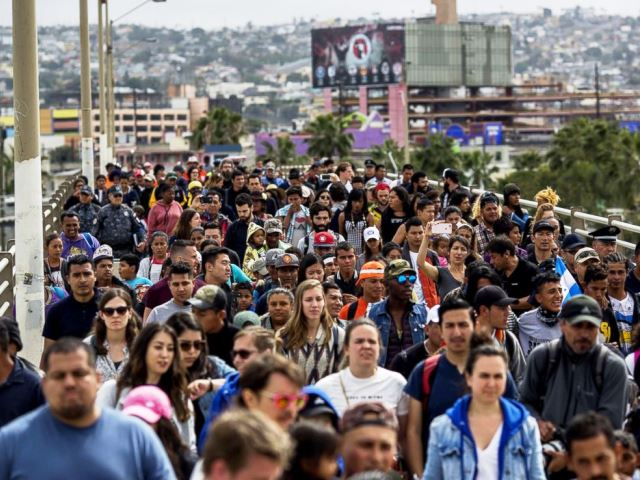 President Joe Biden’s budget request to Congress for 2022 portrays the nation’s homeland security agency as a welcome center for economic migrants who will compete for Americans’ jobs, wages, and homes.

The White House’s “Fact Sheet” simply ignores the migration wave deliberately triggered by President Joe Biden and his pro-migration deputies. Instead, it promises to “Reinvest in the Foundations of Our Nation’s Strength” with a “Fair, Orderly, and Humane Immigration System.”

The budget seeks no raise for the Department of Homeland Security, almost eliminates funding for border barriers, and flatlines spending on immigration enforcement officers.

But it seeks billions in extra spending to register, advise, and house migrants and refugees as they move into Americans’ labor markets and housing markets.

“They’re hiding the true intention of defunding,” said Rob Law, the director of regulatory affairs and policy at the Center for Immigration Studies. The goal is to convert order agents into “border welcomers, ” like Walmart greeters, he said, adding:

Helping immigration is a core function of government, said the document:

The Budget proposes the resources necessary to fulfill the President’s commitment to rebuild the Nation’s badly damaged refugee admissions program and support up to 125,000 admissions in 2022. The Budget would also revitalize U.S. leadership in Central America to address the root causes of irregular migration, providing $861 million in assistance to the region. The Budget provides $345 million for the United States Citizenship and Immigration Services to adjudicate naturalization and asylum cases of those who have been waiting for years. And it increases the budget of the Executive Office for Immigration Review by 21 percent to $891 million to reduce court backlogs by hiring 100 new immigration judges and support teams.

Labor migration is deeply unpopular, in part, because it moves wealth from Americans’ pay packets to investors and from heartland states to coastal states.

But the federal government forces them to compete for jobs against one million new legal immigrants, many new illegal migrants, plus an army of more than eight million illegals and two million white-collar and blue-collar temporary foreign workers.

Biden’s budget seeks funding to welcome at least 1.5 million migrants in 2021, whether they arrived legally or illegally. But his open borders will allow many extra migrants to move into the United States.

The migrants are not going to live in their communities or go to their kids’ schools. They won’t interfere with their elite lifestyle, and in fact, they may very well benefit from it in the form of having cheap babysitters or lawnmower services, or restaurants.

Yet the Biden document claims the extra migration will boost working Americans:

We must seize this moment to reimagine and rebuild a new American economy that invests in the promise and potential of every single American, that makes it easier for families to break into the middle class and stay in the middle class, and that positions the United States to out-compete our rivals.

The budget asks for $345 million to accelerate the award of green cards and citizenship to migrants and to process documents for 125,000 refugees as they are escorted into Americans’ workplaces and towns.

The budget asks for $1.23 billion for border “infrastructure.” But only a tiny share — $54 million — will be used for barriers, and the bulk would be used to build extra facilities to welcome extra migrants.

Another section asks for only $925 million for “Procurement, Construction, and Improvements” for the Customs and Border Protection agency — down from $1.84 billion approved by Congress last year.  A different section asks for $750 million for border facilities — such as migrant welcome centers — far above the $103 million granted last year by Congress.

In the next few weeks, the agency is expected to ask Congress for permission to fund the current migration waves by transferring funds from other priorities favored by Americans, such as emergency rebuilding or anti-drug operations by the U.S. Coast Guard.

The deep public opposition to labor migration is built on the widespread recognition that legal and illegal migration moves money away from most Americans’ pocketbooks and families.
Migration moves money from employees to employers, from families to investors, from young to old, from children to their parents, from homebuyers to investors, from technology to stoop labor, from red states to blue states, and from the central states to the coastal states such as New York.