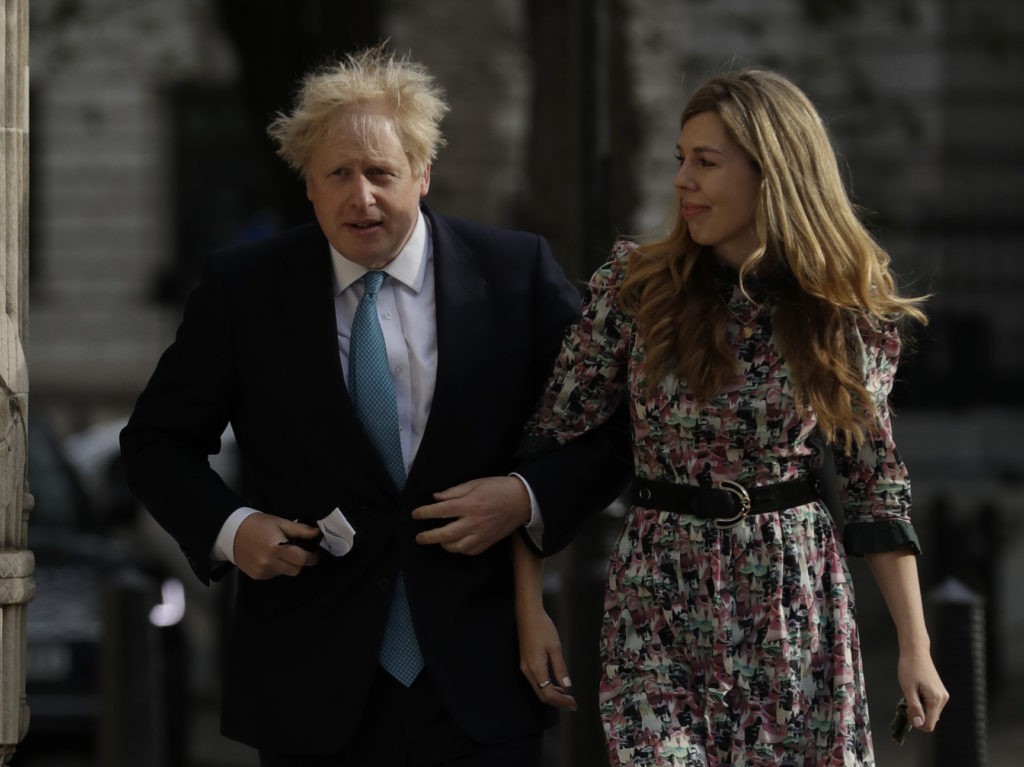 Boris Johnson isn’t going to get any nookie this evening. Well, not if his fanatically green missus Carrie ‘Princess Nut Nut’ Symonds has read this leading article in the Sun.

THE Tories are grossly underestimating the price they will pay if they bludgeon the public into complying with “Net Zero” pledges they made too rashly.

It is suicidal to set arbitrary dates — for banning petrol car sales, gas boilers or for Net Zero itself — without thinking FIRST how to take the public with you.

Well indeed. Some of us could have told you this months ago – and indeed did. The government’s proposed green revolution may be a wet dream come true for the metropolitan elite and a handful of nutcases from Extinction Rebellion, but it’s the purest poison for the country at large. Most people would much rather own a car and be able to heat their home than follow the hair-shirt green gospel of misinformed stooges of the New World Order such as doom goblin Greta Thunberg.

Bojo’s green revolution is a recipe for misery, deprivation and tyranny. Take, for example, the government’s plan — on pain of financial penalties, it is claimed — to force every household in the country to replace their oil- or gas-fired boilers with an air-source heat pump, or other new carbon-neutral alternatives.

Ben Pile has the grisly details on the costs of this scheme:

This will require gas combi boilers – which are small enough to fit in a kitchen cabinet – to be replaced by an air-source heat-pump unit, including a large ‘buffer’ tank. These new units will take up roughly the space of a large cupboard. Due to the lower operating temperature of air-source central-heating systems, radiators will have to be replaced with units that are twice the size as well. Connections to the radiators will also have to be replaced with larger diameter pipework. All of these ‘upgrades’ will leave people with far less space in their homes.

Official estimates of the costs of heat-pump installation vary from between £8,000 and £16,000, depending on the size of the property. And these figures do not include all the extra insulation that is needed to make air-source heat pumps viable (which will likely be required by other Net Zero legislation in any case). New and ratcheting energy-efficiency standards will likely force homeowners to pay for these expensive retrofits before they can legally sell their houses.

When looked at as a whole, the costs to each household are staggering. A favourable analysis of Net Zero policies produced by the Energy Technologies Institute (ETI) estimated that a ‘deep retrofit’ would cost the equivalent of rebuilding a house from scratch. A Victorian mid-terrace would cost £43,000 to retrofit, whereas a mid-century semi-detached house would cost roughly £77,000.

Oh, and after all that expense you’ll end up with a boiler that doesn’t heat your home nearly as well as your old one: air-source heat pumps are notoriously poor in cold weather.

You can just imagine what a vote winner that will prove among all the households forced to install these things at enormous expense: “Mm. Another lukewarm shower! Thanks Carrie! Thanks Boris!”

It’s the same with cars. Another part of Bojo’s green revolution is to force everyone to give up their petrol- and diesel-driven cars and switch to electric, which are generally much more expensive to buy. According to the Sun, this may mean that car ownership falls to less than half its current level – with poorer households suffering most.

But finally, at least one MP has woken up to the scale of the impending disaster. Here is Steve Baker pulling his finger out at last and telling it like it is:

The elite policymakers who govern our lives agree we should reduce our carbon emissions. But they have not been up front about the cost for working families. You, the voter, have not had a choice.

We Conservatives spent years in the wilderness after we lost touch with our voters.

If Boris Johnson forces the public into buying expensive, ineffective heating, if he makes us give up our cars, we will reap what we have sown.

The cost of Net Zero could deliver a political crisis greater than the Poll Tax.

Oh, definitely it will. The Sun has turned terribly, tragically eco in recent months — ‘Join the Sun’s Green Team & Save the Planet’, says an ad next to the Steve Baker article — but it’s not in the business of committing commercial suicide. If the Sun is running editorials like this, you can bet that it has sensed the mood of its readers and that there is revolution in the air.

Boris Johnson’s green revolution is a direct assault on two things British people hold dear — the sanctity of their homes (which includes being able to turn up the thermostat to whatever temperature they like); their freedom to travel on their own terms at their own time in their own vehicle.

Perhaps, he knows what’s good for him, Bojo should spend less time listening to whisperings of Carrie Antoinette and a lot more to the needs of ordinary working people.