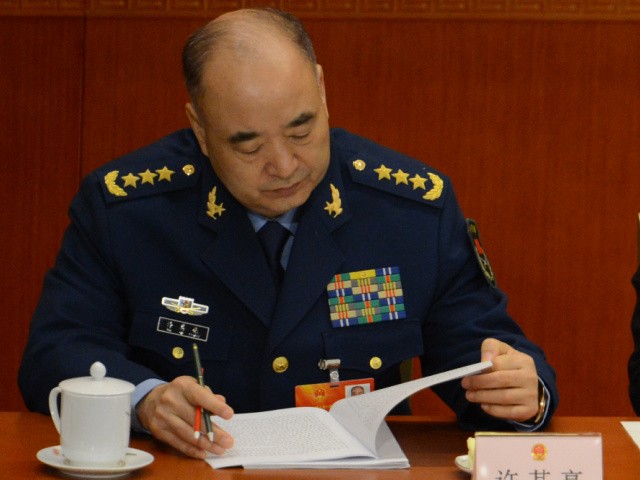 The Chinese military has been ignoring requests from the Biden Pentagon for its top leaders to speak for the first time since it took office in what appears to be a diplomatic stand-off, according to reports.

A Financial Times report on Friday revealed Beijing has “rebuffed” three requests from the Pentagon for talks between China’s top military officer, General Xu Qiliang, and Defense Secretary Lloyd Austin. Xu is the vice-chair of the Central Military commission and a politburo member.

Chinese state-run news outlet Global Times then reported on Monday that the U.S. report was “untrue” and accused Austin of being “unprofessional and unfriendly.” The report claimed that China had “sent a congratulatory letter through military diplomatic channels” to Austin after he became defense secretary and proposed that the two countries’ defense chiefs “hold talks at a proper time,” and that the U.S. never responded to the letter, according to a “source.”

The report said the Pentagon then requested talks with another Chinese military leader, which it called “unprofessional and unfriendly” and “irresponsible.” The report said:

…the US turned a blind eye to China’s goodwill and sincerity, disregarded diplomatic protocol and international common practice and did not respond to China’s congratulatory letter, but then requested to talk to another Chinese military leader in the Central Military Commission, which is a move deemed unprofessional and unfriendly, the source said.

The US is now releasing inaccurate information through the press and is attempting to shift the blame to China for the fact that no high-level military talks have taken place so far. This is irresponsible, the source said.

The Pentagon on Tuesday refrained from engaging in similar name-calling.

“I’m not going to match the public tit-for-tat here in terms of communications,” Pentagon Press Secretary John Kirby said in response to a question from Breitbart News on the Global Times report.

“We desire to have a dialogue with our counterparts in Beijing, and we’re still working our way through what that’s going to look like and how that’s going to transpire.  And I think I’ll just leave it there,” he said.

A defense official told the Financial Times that there were talks for Austin to meet the Chinese defense minister, Wei Fenghe, at an annual defense forum in Singapore in June, but that Austin had opted against that meeting in favor of speaking with Xu, who outranks Wei.

Casting a shadow over the Pentagon dispute is the spectacle of the two countries’ top diplomats meeting last month in Anchorage, Alaska.

What was expected to be cordial and scripted on-camera statement before an official closed-door meeting turned unusually tense and combative in front of stunned journalists.

ὄ Xi delegation tells Biden delegation that they don’t have the qualification to say they speak to China “from a position of strength.”

This squabble played out at publicly in Alaska, in front of press, at 1st meeting between Biden admin and China.

In light of that exchange, U.S. officials told the Financial Times that they do not want to hold high-level meetings with China “just for the sake of it.”

Making things more awkward for the Biden administration is that Xu did meet with former President Donald Trump’s Defense Secretary, Jim Mattis. The White House is reportedly split over whether Austin should go ahead and meet with Wei or wait to speak to Xu, who has more authority.

The row is occurring as military tensions between Beijing and Washington heat up over China’s increasing aggressiveness over Taiwan and the South China Sea, both of which China considers part of its domain.

James Schoff, a senior fellow focusing on East Asia at the Carnegie Endowment, tweeted the “lack of communication is a serious issue,” in light of a recent naval dispute between the U.S. and China.

In light of the dispute that surfaced yesterday between China’s Southern Theater Command and US Navy on USS Curtis Wilbur’s Freedom of Navigation Operation around the Paracelsus Islands (as 1 example), this lack of communication is a serious issue.
https://t.co/dSpxuuPoY1

Ian Bremmer, president of the Eurasia Group, tweeted that “US-China relations” were at the “worst level since Tiananmen Square protests/massacre in ’89.”

“But especially given absence of trust on both sides, we need to be talking. China’s refusal to meet US Defense Secretary is irresponsible,” he tweeted.

US-China relations at worst level since Tiananmen Square protests/massacre in ‘89.

But especially given absence of trust on both sides, we need to be talking. China’s refusal to meet US Defense Secretary is irresponsible. https://t.co/Sy6TiQJcFC

Chad Gilmartin, a former Trump administration official and current aide to House Minority Leader Kevin McCarthy (R-CA), said in tweet that it was “dangerous” that Austin has been unable to speak to his Chinese counterpart since he took office.

“This follows China’s foreign affairs chief lecturing Secretary of State Blinken in Anchorage saying the U.S. it cannot speak to China from a position of strength,” he added.

Dangerous: Biden’s Defense secretary has been unable to speak to his Chinese counterpart since he took office.

This follows China’s foreign affairs chief lecturing Secretary of State Blinken in Anchorage saying the U.S. it cannot “speak to China from a position of strength.”