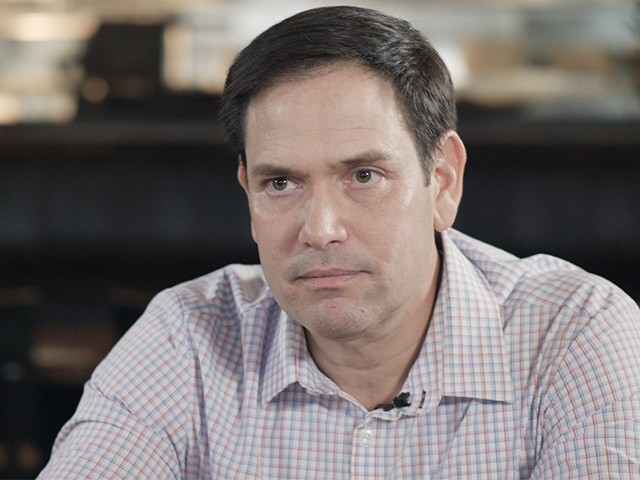 “They sense opportunity,” Rubio said in an exclusive interview last week when asked to react to reports that CCP officials have increased U.S. influence operation spending 500 percent since Biden took office. “They sense opportunity because the opportunity they sense is twofold. Number one is, unfortunately, these guys are really smart. They really analyze and understand our politics a lot better than we understand theirs. They realize we have a new administration and they realize this new administration is going to try to do everything the opposite of what Donald Trump did. If Trump was for it, they want to be against it, automatically. So that’s what they sense. They’re trying to take advantage of that. But they also are trying to take advantage of gaps in the system.”

Rubio’s comments came during a lengthy exclusive video interview with Breitbart News in Miami, Florida, as part of Breitbart’s On The Hill series. The interview took place at a multigenerational family-owned Cuban restaurant called Sergio’s, which benefited and survived as a result of funds received from Paycheck Protection Program (PPP) at the beginning of the coronavirus pandemic. Rubio was instrumental in the Senate in developing the bipartisan PPP program. Rubio joined Breitbart News for an hourlong tour of the restaurant and exclusive sit-down on-camera interview last week on Friday morning in which he addressed not only the rise of China but also key major political trends in Florida and across the country, as well as looming questions about the future of the Republican Party.

In this part of the interview, Rubio pointed to bipartisan legislation the U.S. Senate is considering this week called the Endless Frontier Act as an example of the United States being weak in the face of Chinese aggression. While he said it is “good” that senators from both parties are teaming up on the bill—which is designed to counter longterm efforts by the CCP to engage a number of industries and cutting edge fields of technology for its purposes by pumping more than $100 billion into U.S. research institutions—he is concerned that the bill does not have proper safeguards to prevent the research that would be done as a result of that funding from falling, again, into the hands of Chinese Communist Party officials.

“So, for example, right now we’re trying to do this China bill—which is good—I’m glad the Democrats and the Republicans recognize we have to do something,” Rubio said, referring to the Endless Frontier Act.

“Here’s the problem. The problem is it pours all this money into research and development,” Rubio said. “But as of today, and I hope that will change, it doesn’t have safeguards in place to keep that from being stolen.”

The bill also, in addition to a lack of serious safeguards to stop research it would fund from ending up in CCP possession, contains, as Breitbart News recently reported, a key provision that Senate Commerce Committee chairwoman Sen. Maria Cantwell (D-WA) added to it that would essentially serve as a handout to a company operating in her home state. What Cantwell added to the bill was an amendment that created a $10 billion guaranteed second contract for a human landing system to be developed by NASA as part of its Artemis project aimed to bring American astronauts back to the moon. While the amendment text does not specifically state who the contract would go to, the move came after Elon Musk’s SpaceX beat out Jeff Bezos’s Blue Origin for the original contract. The second contract, arguably, would then likely go to Bezos’s company, which is headquartered—like his other company, Amazon—in Cantwell’s Washington State.

But more broadly than the Cantwell Bezos kickback concerns in the Endless Frontier Act, Rubio continued in the Breitbart News interview by noting that the CCP already has “claws” into many of these research institutions that the bill would fund, and without extra safeguards the research promulgated by this legislation would inevitably end up in its hands.

“But imagine if you’re trying to say, ‘ok so America is now going to spend $150 billion on research through universities that we already have our claws in. That’s great. We’ll just steal it. Go ahead and spend your money, and we’ll steal your research. We get it for free,’” Rubio said. “It’s crazy. It’s nuts. So that’s the problem we’re having, these things of that nature. And the reason it’s happening is because universities have ins with the administration and they’re saying, ‘hey don’t put in a lot of restrictions or safeguards because it’s going to slow down our research.’ Well, that’s crazy. It would be faster for me to get on an airplane if I didn’t have to go through TSA too, but we have to do it. We have to have safeguards. So what’s that they sense.”

Rubio is correct that the Chinese Communist Party has deep ties into American universities, colleges, and research institutions. Last January, the Justice Department arrested the chair of Harvard University’s Department of Chemistry and Chemical Biology, indicting him on charges of making materially false statements in connection with his work with the CCP’s Thousand Talents program. “China’s Thousand Talents Plan is one of the most prominent Chinese Talent recruit plans that are designed to attract, recruit, and cultivate high-level scientific talent in furtherance of China’s scientific development, economic prosperity and national security,” the Justice Department said in the press release announcing the indictment of Harvard’s Dr. Charles Lieber.

Later in 2020, Chinese scientist Song Gou Zheng–who worked with Ohio State University and Pennsylvania State University–was arrested in Anchorage, Alaska, while the U.S. attorney’s office says he was attempting to flee the country after Ohio State University began reviewing whether he was complying with rules governing intellectual property from government-funded research. Zheng was also part of the Thousand Talents program.

Also in 2020, the Justice Department arrested and brought charges against a former Cleveland Clinic Foundation employee–also a Thousand Talents program participant–Dr. Qing Wang, for misrepresenting his ties to Chinese research and educational institutions in the process of securing millions of dollars in U.S. research funding.

There are several more such examples of these types of cases across the country.

To make his case that the Chinese Communist Party senses “opportunity” in the Biden era, Rubio also pointed to a move by the Biden administration in recent days to reverse a ban instated by former President Donald Trump’s administration on U.S. investment in companies connected to the Chinese military. Rubio warned that the move is “nuts,” as it now constitutes U.S. investment in companies that are fueling weapons development that could, in a future potential war between the United States and China, mean these weapons could be used to kill Americans.

“Look, just a couple days ago—we had a ban in place. The Trump administration had implemented a ban on investments in companies that had links to the Chinese military,” Rubio said. “In essence, companies that are building weapons to kill Americans one day in a future conflict, God forbid. They just suspended that—the Biden administration, they’ve just suspended a ban on American investment flowing into companies who are designing weapons to blow up our aircraft carriers. That’s nuts.”

More from Rubio’s exclusive interview with Breitbart News in Miami is forthcoming.