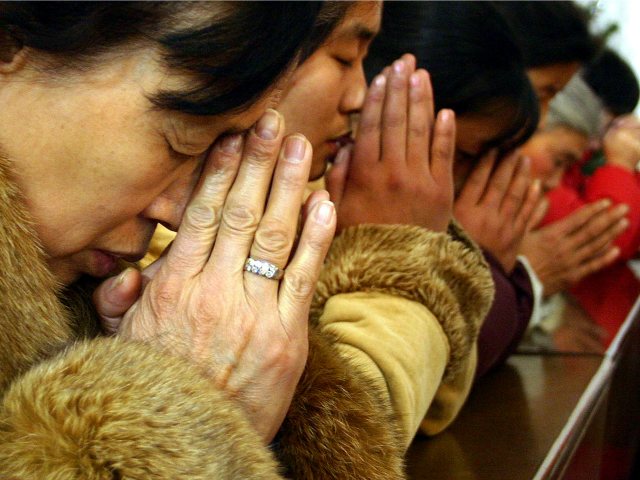 Christianity is legal under the communist regime in China only under the Chinese Catholic Church, run by the Party and not the Vatican, and the Patriotic Three-Self Church, a “Protestant” alternative also run by the Communist Party. Many Chinese Christians reject both options, as the Party does not allow free worship in its legal institutions and requires clergy to use their platforms to advance the regime’s agenda. Instead, many choose what is referred to as “house churches” – illegal worship in private homes, where small groups get together to study the Bible and pray. Beijing officially estimates China is home to about 40 million Christians. Counting “house church” Christians, however, independent groups believe the number is closer to 100 million people, more than the total membership of the Communist Party.

Under dictator Xi Jinping, the Communist Party has for years implemented a policy it calls “sinicization,” or turning all religions “more Chinese.” This has translated into the building of hundreds of concentration camps for Muslims in the nation’s West, where they face extreme indoctrination, as well as the mass arrests of independent Christians, Tibetan Buddhists, and Falun Gong practitioners. The imprisonment of Christian pastors who refuse communist control has been heavily publicized and widespread; the RFA report reveals what appears to be an alternate punishment for Christians who the Party struggles to disappear into its draconian legal system.

A witness identifying only by the pseudonym Li told RFA he had been initially arrested in a raid against parishioners at his church in 2018 and released on bail. Prosecutors apparently had little to use against him, so he fell under the control not of Chinese police, but of the United Front Work Department, an arm of the regime tasked with fostering and maintaining loyalty to the Communist Party.

Li said he spent about nine months in a “mobile” torture facility run by the United Front Work Department.

“They use really underhand methods. They threaten, insult and intimidate you. These were United Front officials, men, women, sometimes unidentified, usually in plain clothes. The police turn a blind eye to this,” Li told RFA. “You have to accept the statement they prepare for you. If you refuse, you will be seen as having a bad attitude and they will keep you in detention and keep on beating you.”

“There were no windows, no ventilation and no time allowed outside. I was given just two meals a day, which were brought to the room by a designated person,” Li described. “I couldn’t sleep; after you’ve been in there a week, death starts to look better than staying there. I bashed myself against the wall to self-harm.”

RFA corroborated the story with testimony from an attorney representing persecuted Christians, who said both Christians and Falun Gong practitioners were subject to similar torture and brainwashing facilities.

“These brainwashing places were similar to the ones used on the Falun Gong. … After the religious affairs officials had arrested the bishops and priests, they didn’t pursue criminal charges — they just disappeared them, sometimes for five, six or even 10 years at a stretch,” the attorney said. “Some were sent back home after five or six years, and that was how people learned about the brainwashing centers — from their accounts.”

Persecution of Christians in China, widespread evidence suggests, ranges from milder tactics such as offering poor Christians food or other financial incentives to replace crosses in their homes with communist iconography to extreme torture and human rights atrocities inflicted on Christians in prison. A report from the human rights magazine Bitter Winter highlighted the latter side of the spectrum last week, quoting members of the Church of Almighty God, a banned Christian sect in the country. One such member, a woman, anonymously told the magazine she endured torture tactics such as being made to stand for 18 hours a day.

“On the fourth day when I was standing at attention, my feet became numb, feeling like lead. When I went to the toilet at night, I had to move slowly with my hands supporting my knees. The backs of my feet and my legs were all black,” the woman narrated. “If I stayed in the toilet over the three minutes they set, the prisoners would shout to urge me, and pour cold water over my body. As they poured water on me more than once, my shoes were always wet, making my feet swollen even more, so that I had difficulties in putting my feet into my shoes.”

The woman noted the torture intensified when she resisted pressure to sign a statement, allegedly from her, renouncing her Christianity.

On the other end of the spectrum is the pressure that Christians of more mainstream belief, who the government does not imprison, feel from local officials, particularly in rural areas where the regime has previously not implemented such stringent efforts to eradicate the faith. These tactics are used especially on the minority of Christians who identify with the nominally legal Three-Self Patriotic Church.

A 2020 report revealed Three-Self members had begun receiving visits from local Communist Party officials to their homes, asking them to remove all signs of their faith and replace them with images of Xi Jinping or Mao Zedong. Some reportedly lost access to welfare programs, or were offered extra financial aid in exchange for redecorating their homes.

“These are the greatest gods. If you want to worship somebody, they are the ones,” a Communist official reportedly told a Christian villager in Shandong last year, referring to Mao and Xi.