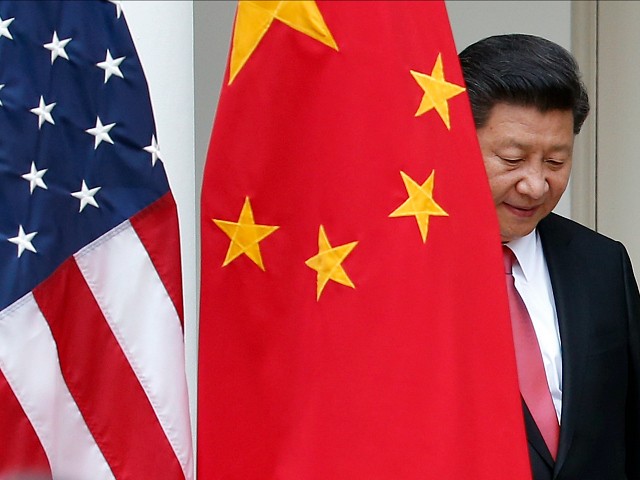 China’s state-run Global Times on Sunday hailed Chinese provinces and American state governments for “seeking to boost subnational economic and trade cooperation” — in other words, bypassing U.S. national policy and its restrictions on trade with China.

The Global Times was excited that representatives from U.S. states such as California, New York, and Iowa attended an online forum for economic cooperation run by China’s Ministry of Commerce (MOFCOM).

According to MOFCOM, participants in the forum “held in-depth discussions regarding strengthening economic and trade communication at the provincial and state level and promoting mutually beneficial development.”

The American participants in the forum seemed very comfortable with Beijing’s approach to “sub-national cooperation.” Some of them reportedly parroted Chinese propaganda language like “win-win cooperation”:

New York State Lieutenant Governor Kathy Hochul said via teleconference that as the state is building back stronger than ever after the COVID-19 pandemic, it is committed to promoting win-win economic development.

“We have had a long partnership [with China] and we look forward to continuing this relationship in the future,” said Hochul.

Chicago Mayor Lori Lightfoot told the forum that as part of its COVID-19 economic recovery plan, the city plans to invest in areas such as manufacturing, life sciences, transportation and food processing, and it plans to seek cooperation with China over these sectors.

“Such cooperative approach from US states stood in stark contrast to the U.S. federal government’s aggressive policies toward China, including clampdowns on Chinese businesses,” the Global Times sniffed, pushing a popular taunt in Chinese state media that President Joe Biden is somehow captive to the wrongheaded anti-China policies of his predecessor Donald Trump.

The Chinese government has hosted a series of “sub-national cooperation” forums since 2011, involving as many American governors and/or state legislators as they could persuade to attend. The meetings rarely attract much attention from U.S. media, while Chinese state media celebrates them as major events.

During his address to the fifth annual “China-U.S. Sub-national Legislatures Cooperation Forum” in March, Chinese Ambassador to the United States Cui Tiankai portrayed sub-national cooperation as the American people and their state representatives longing for a thaw in relations with China after the “cold snap” of the coronavirus pandemic.

“The two countries need to work together under the principle of no conflict, no confrontation, mutual respect and win-win cooperation, focus on cooperation and manage differences, to promote the healthy and stable development of China-U.S. relations, bring more tangible benefits to the two peoples, and contribute to peace and development of the humanity,” Cui said.

Some left-wing U.S. state governments have been happy to oblige China’s messaging needs. For example, in April 2019, at a time when China’s Belt and Road Initiative (BRI) was coming under intense criticism for servicing China’s foreign policy objectives and luring underdeveloped countries into debt traps, California Lt. Governor Eleni Kounalakis gushed over BRI as an invited guest at a form in Beijing. Kounalakis hailed BRI as a major step toward fighting climate change, ignoring the fact that China the world’s worst polluter and is using its vaunted Belt and Road infrastructure program to litter the developing world with coal-burning power plants.