‘Breaking the News’ Q&A and Book Signing with Alex Marlow 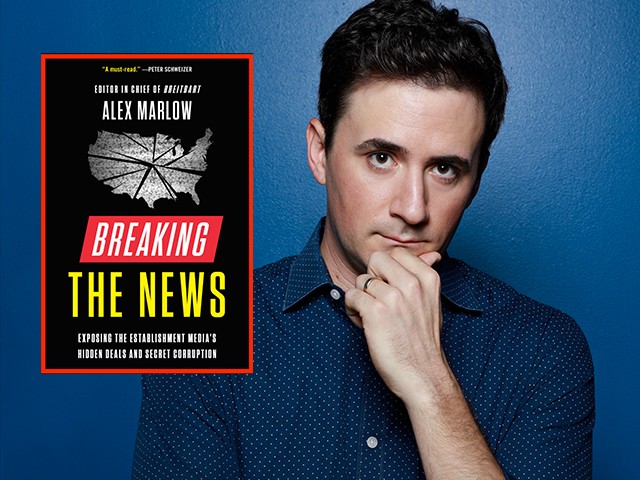 Breitbart News Editor-in-Chief Alex Marlow is participating in a live book signing of his investigative blockbuster, Breaking the News: Exposing the Establishment Media’s Hidden Deals and Secret Corruption, where he will answer reader questions on the day of the highly-anticipated book’s release.

The live book signing, hosted by Premiere Books, begins on Tuesday at 2 p.m. Eastern. Marlow will answer reader questions and discuss the year-long investigative work, which pulls back the curtain exposing the deep-seated yet little-known connections between the establishment media conglomerates and far-left players.

In Breaking the News, Marlow dives into the establishment media’s “incestuous” relationship with “America’s ideological Left,” showcasing their systematic efforts to promote fake news while burying newsworthy stories inconvenient to their desired narratives. He exposes how “leftism, globalism, and corporatism have emerged as the dominant ideologies that drive major content decisions by leading news outlets.”

“I spent a year researching the nexus of the establishment media, multinational companies, and the activist left,” Marlow said, explaining that even he was left “stunned” at what he discovered over the course of his year-long investigation.

“When you read this book and the bombshell revelations therein, you’ll never think of the news industry the same way again,” Marlow continued. “We have moved beyond the age of ‘liberal bias.’ Our corporate press is no longer credible, and yet they have amassed even more power than you can possibly imagine.”

“This book is, hopefully, the beginning of a mass effort to fight back (figuratively speaking),” he added. “The powers that be do not want you to read this book; I hope you buy it while they still let you.”

Breaking the News is available now. Readers can get a signed copy here.