Bodycam Shows Officer Under Fire as He Arrives on Scene 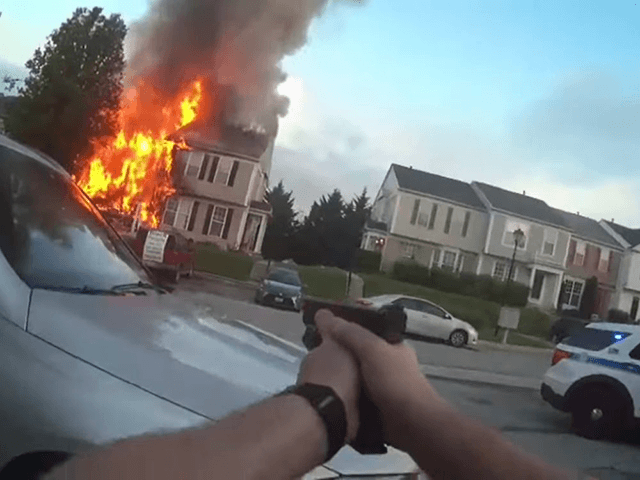 Bodycam footage was released Friday from the May 8, 2021, incident in Baltimore, Maryland, where a resident allegedly set his townhome on fire, shot three neighbors, then shot at police as they responded.

A 911 call to Baltimore County dispatchers, received around 6:40 a.m. on May 8 and released by Baltimore Police & Fire, contains a recording of the caller saying something had just happened which “jarred [her] out of bed.”

Somebody banging on somebody’s front door, and then I just heard three gunshots. I see a man standing in the door posed with a weapon in his hand, and I don’t know what he did to get in there because it jarred me out of bed, and I’m about three or four doors down.

The suspect, 56-year-old Everton Brown, allegedly blew up his own townhouse then walked around shooting at neighbors who came out to investigate, the Baltimore Sun reported.

A witness, 51-year-old Kweku Quansah, said he heard the explosion then came out to see what happened. At that point he saw Brown and described the moment, saying, “He was shooting towards us. And then I saw a lady on the ground. He turned and shot the lady again on the ground.”

Another neighbor, Ranjith Ravindiran, claimed Brown was going house-to-house, “door-to-door with a gun.”

When officers arrived, Brown allegedly shot at them.

#BaltimoreCounty
*potentially disturbing*
Officer arrived on scene of a working house fire and is immediately fired upon by an individual in a red truck.