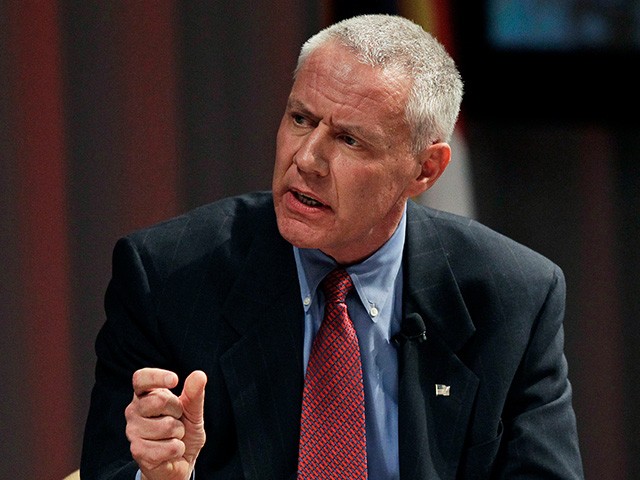 House Judiciary antitrust subcommittee ranking member Rep. Ken Buck (R-CO) is continuing to co-sponsor and promote a bill with Rep. David Cicilline that would allow big media companies to form a cartel to pressure companies for more censorship and special favors by creating a special antitrust carve-out for them.

Buck is leading this charge while taking thousands and thousands of dollars this year from special interests and lobbyists backing the legislation. In total, in just the past two months, recent Federal Election Commission (FEC) filings show Buck has raked in at least $18,000 from lobbyists, special interest groups, and PACs for organizations that support the legislation he is championing that would fundamentally change the media and technology landscape.

The bill, opposed by both the full Judiciary Committee’s ranking member, Rep. Jim Jordan (R-OH), who warned the bill would give establishment media outlets “cartel power,” as well as House GOP leader Kevin McCarthy, who called it “the antithesis of conservatism,” is called the Journalism Competition and Preservation Act (JCPA). It would create a special legal exemption in antitrust law for media companies to allow them to band together in a manner that would otherwise be illegal so they could collectively bargain with big tech companies.

The controversial legislation is the brainchild of a special interest group called the News Media Alliance (NMA). NMA, which is technically a 501(c)6 as classified by the IRS, is a membership-based advocacy organization with top establishment media organizations as leading board members.

The News Media Alliance includes among its board of directors several top establishment media company executives, with senior officials for major establishment media outfits like the New York Times, the Minneapolis Star-Tribune, the Tampa Bay Times, the Boston Globe, the Dallas Morning News, USA Today, Fox News, Wall Street Journal. and New York Post owner News Corporation, among its current board of directors, according to its website. The current leadership of the News Media Alliance is run by a News Corporation executive. Antoinette “Toni” Bush, the Executive Vice President and Global Head of Government Affairs at News Corporation, is currently from 2020 to 2022, serving as the chair of the board of the News Media Alliance.

Buck’s continued drive to push the legislation–which has wide scale support in the Democrat Party–has befuddled conservatives who generally have liked him over his years in Congress. But it turns out that Buck’s advocacy for this bill coincides with a steady stream of at least $18,000 in campaign donations from lobbyists for special interest groups and corporations that would stand to benefit significantly if the bill became law.

The News Media Alliance, for what it’s worth, literally publicly thanked Buck for doing its work on pushing the bill–a tweet that Buck retweeted–earlier on Monday:

“The #SafeHarbor4News would provide small-town outlets and big-city newspapers, as well as conservative and liberal outlets the opportunity to negotiate together and receive more of their hard-earned advertising dollars from Google and Facebook,” says @RepKenBuck pic.twitter.com/lpAnAYtjCg

Backers of the legislation believe it may rein in big tech companies by forcing them to pay news organizations for content they use on their platforms, but as Breitbart News has demonstrated, the legislation has a number of flaws and loopholes that would actually end up empowering big tech and big media companies, while still hurting independent and smaller publishers.

Such flaws with the bill include the lack of a favored nations clause, which would allow a handful of large of media companies to cut their own deals with big tech companies—the terms of which would not apply universally and likely leave out other publishers like conservative and independent media. Another flaw is a usage issue, which means, even if the big tech companies agree to universal implementation of the payment standards across all media, the companies could just keep icing out conservative media—like Google has done to Breitbart News for the last year plus.

Establishment media companies, like those represented on NMA’s board, would potentially stand to gain financially from this legislation should it ever become law, because it would carve out an exemption in antitrust law for them that would allow them to collectively bargain with big tech companies to reach payout agreements for media content creators from the tech platforms. Perhaps that’s why their allies in the D.C. swamp are so keen on funding the campaigns of members of Congress willing to do their bidding.

Six days before Chavern doled out this donation to Buck, he testified before the House Judiciary Committee’s Subcommittee on Antitrust, Commercial, and Administrative Law at a hearing on the JCPA on March 12. Cicilline, the subcommittee’s chairman, presided over the hearing. Buck is the ranking member of the subcommittee.

Less than two weeks after the hearing, on March 25, FEC records show, Danielle Coffey—the general counsel for the News Media Alliance—gave an additional $1,000 to Buck.

A day after Chavern’s donation, Susan Hirschmann—the CEO of Washington, DC, lobbying firm Williams and Jensen—gave $1,500 to Buck on March 19, FEC filings show. The Center for Responsive Politics lists Hirschmann and several of her other colleagues at the Williams and Jensen lobbying firm as registered lobbyists for the News Media Alliance. The amount she made from this, according to the filings published by the Center for Responsive Politics, was $240,000 in the calendar year 2020.

Her fellow Williams and Jensen lobbyist, Matthew Hoekstra—who is also listed by the Center for Responsive Politics as a registered lobbyist for the News Media Alliance, also making $240,000 in calendar year 2020—gave $2,000 to Buck on March 30 of this year, per FEC filings.

Williams and Jensen attorney Christopher Hatcher, according to the Center for Responsive Politics a registered lobbyist for the News Media Alliance, gave Buck $500 on March 30.

The National Association of Broadcasters (NAB) PAC gave Buck $5,000 on March 26, per FEC Filings. The NAB is a special interest group that backs the JCPA as well, and it counts among its current board members NBCUniversal executives, Walt Disney Corporation executives, CBS executives, and many more on its who’s who board member list.

But then, hours after that initial indication that the congressman would cooperate, Ventry later changed his mind. “No comment over here at this point,” Buck’s chief of staff told Breitbart News.

The ultimate irony here is that Buck, the man who literally wrote the book titled Drain the Swamp: How Washington Corruption is Worse than You Think, is in reality taking thousands upon thousands in campaign donations from lobbyists backing legislation he is pushing.

On the front flap of the 2017 book, Buck’s publisher writes, as part of the effort to sell the book, derisively of official Washington, DC: “Lavish parties. Committee chairmanships for sale. Pay-to-play corruption, Backroom arm-twisting. Votes on major legislation going to the highest bidder.” Breitbart News, in 2017, published a broader excerpt of the congressman’s anti-corruption book.

Now the shoe is on the other foot, and Buck is the top Republican on a key subcommittee and pushing controversial legislation that has key special interests backing it—all while he’s taking thousands upon thousands of dollars in political donations from those very same special interests.

As the broad and serious flaws have emerged in the legislation—a House Judiciary Committee subcommittee hearing on the bill exposed many of them—GOP opposition to the legislation has intensified. McCarthy, the House GOP leader, came out against the bill in a Breitbart News exclusive last month, and Jordan–the House Judiciary Committee ranking member–has been similarly stridently opposed to the bill. Even cosponsor Rep. Matt Gaetz (R-FL), during the early March hearing on the proposal, expressed concerns with the bill and said he would consider withdrawing his support for it.

Before Gaetz could pull his cosponsorship of the bill, he was hit with allegations of sexual impropriety that have dominated headlines around him for weeks since that hearing. But Gaetz, sources close to him contend, may still withdraw cosponsorship of the bill. Per other House GOP aides, other GOP cosponsors of the legislation, including Reps. Burgess Owens (R-UT) and Victoria Spartz (R-IN), have privately signaled they may withdraw support as well, raising concerns about the bill and how it was presented to them to win their support in the first place.

Buck has been aggressive in pushing his legislation, even in the face of unified Republican opposition to the bill from McCarthy and Jordan. To pass such a bill out of this divided Congress—where Democrats have slim majorities in the House and Senate—the Democrats would need to win over at least 10 Senate Republicans (if the bill ever got that far) to get around the filibuster in that chamber. The Senate version of the bill has as original cosponsors Sens. Amy Klobuchar (D-MN) and John Kennedy (R-LA)—but most other Republicans have not weighed in yet. That is why building Republican opposition to the legislation has irked the bill’s supporters, as they fear the bill would need significant GOP support in the House to clear the hurdles needed to get it through the filibuster in the Senate.

McCarthy’s move to announce opposition to the bill—a huge move for any party leader in either the minority or majority to weigh in against specific legislation—brought to a screeching halt any more momentum behind the bill. But Buck went to work quietly—along with a group of the bill’s most cash-flush special interests—over the past several weeks since McCarthy’s announced opposition, to build what he claims is broad conservative media support for the bill. Buck produced the fruits of that organizing work late Sunday night when he rolled out a letter signed by executives from a number of nominally rightwing media organizations expressing support for the bill.