The White House prepared to celebrate a jobs-gained milestone of 2 million on Friday under President Joe Biden during his first 100 days — but those plans were shattered by the devastating jobs report for April.

“If the U.S. economy adds 700,000 jobs in this latest report, that will be 2 million new jobs in the first 100 days of the new administration,” the report read, “Joe Biden would be the first president to reach 2 million jobs in that time period.”

The White House had already scheduled an 11:30 a.m. event for the president to deliver remarks on the jobs report before leaving Washington, DC, for a weekend at his home in Delaware, presumably to celebrate the gigantic milestone.

But the job numbers report showed Friday that unemployment ticked up to 6.1 percent and only 266,000 jobs were created in April. Previous job gains were also revised down.

On Thursday, Joe Biden boasted of his record in creating jobs, with anticipation of further gains.

“One of the things that — that I’m proud of is, in the first 100 days that I became President, we have created more jobs in that period of time than any administration in history,” he said proudly at an event in Louisiana.

White House chief of staff Ron Klain suggested Friday the jobs report only bolstered the notion that there was too much spending in the coronavirus relief package after he retweeted analysis from TPM’s Josh Marshall. 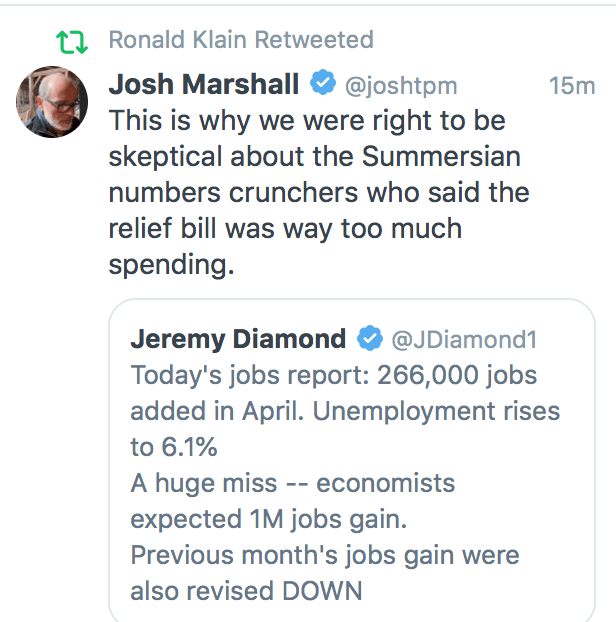