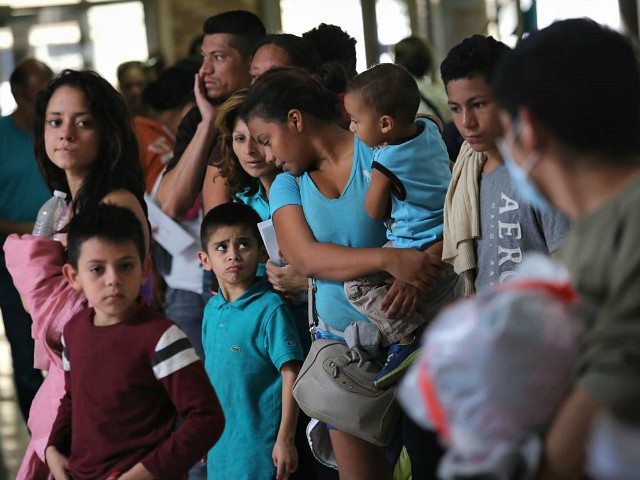 Migrants are being caught and released into the United States without court dates, the acting commissioner of the U.S Customs and Border Protection (CBP) agency admitted Wednesday.

His comments came during a hearing held by the House Appropriations Subcommittee on National Security.

Migrants are supposed to get a “Notice to Appear” (NTA) in a U.S. court, Rep. John Rutherford (R-FL) told the CBP chief.

So “the Notice to Appear … [has become] a Notice to Disappear. Disappear into the interior of this country,” the Republican congressman added.

Migrant families caught trying to cross illegally at the Rio Grande Valley (RGV) sector in Texas are released into the country with only a Notice to Report (NTR) to an immigration office, Miller testified.

Rather than providing a court date, the NTR orders the migrants to report to an Immigration Customs Enforcement (ICE) agency office within 60 days, Miller told lawmakers.

Miller revealed that migrants released into U.S. communities with NTAs are not getting court dates either.

Asked by Rep. Lucille Roybal-Allard (D-CA), the House panel’s chairwoman, to comment on “the rationale for issuing” NTR orders, Miller said in responding:

The Notice to Report process cuts the paperwork in half, but let me clear up some misconceptions about the Notice to Reports. Agents perform the same national security and border security checks they do as they would with a Notice to Appear [NTA]. They will collect biometrics, and facial recognition [data] … [and] the migrants are also given a [document] which tells them they must report to an ICE location within 60 days. This is essentially the same process that we perform during the NTA. Same checks, collecting the same biographic and biometric information.

The CBP acting commissioner said that the NTR process began on March 19. He stressed that the agency is only using it in the RGV sector, which he described as the epicenter of the surge in Central American migrant families Unaccompanied Children (UCs) at the U.S.-Mexico border.

He added when justifying the use of NTRs:

We are filling out five [fewer] forms. Cutting the time [to process the families into the U.S.] in half and the reason that this continues in RGV … to a limited extent is we continue to see about 1,700 migrants a day with the greater percentage of family units in RGV, 41 percent versus 25 percent nationally, and a greater number of UCs, unaccompanied children, 14 percent versus 8 percent nationally.

“This is not a decision we made lightly, but it was necessary … given the capacity in our facilities and the need to decompress our facilities to keep not only the folks in our custody safe but to keep our agents and officers safe,” Miller added, referring to issuing NTRs.

Miller acknowledged that CBP is also not issuing a court date for migrants released into U.S. communities with Notices to Appear before an immigration judge.

“Let me correct a common misrepresentation currently … in the NTA, the time and date [are] marked as to be determined,” he explained.

“So we are not issuing a court date on NTAs today because of [the U.S. Department of Justice that oversees immigration courts] DOJ not having a non-detained docket,” he revealed.

The CBP chief emphasized that only families released into the U.S. interior are getting NTAs and NTRs.

CBP processes unaccompanied children and single adult migrants into the U.S. differently, with most of the latter group denied admission under pandemic control protocols, he added.

Miller was hesitant to admit that the U.S. Department of Homeland Security (DHS), which oversees CBP and ICE, cannot track the migrants who get NTRs and NTA’s until they check in with an immigration official.

The biggest concern I have is the breakdown of communication between CBP and ICE. … [ICE officials] did tell us that there’s no way to track them once the NTAs or NTRs … are out of your custody until they either check-in or, as we know, many times don’t.

Miller said communication between CBP and ICE has improved.

Chairwoman Roybal-Allard blasted critics for describing the NTR process as a “catch and release” policy.

Instead, she said it is “a form of prosecutorial discretion” granted “to certain migrant families in the RGV sector of Texas due to severe overcrowding in CBP facilities” fueled by the recent surge in UCs at the U.S. southern border amid the ongoing Chinese coronavirus pandemic.

“As CBP has worked with HHS [U.S. Department of Health and Human Services] to reduce the number of children in CBP custody, the number of such [NTR] notices issued has gone down significantly,” the chairwoman declared.