AP Photojournalist in Morocco Has History of Antisemitic Tweets


An Associated Press (AP) photojournalist based in Morocco has a history of antisemitic tweets and public comments, Breitbart News has learned.

Mosa’ab Elshamy, now an AP staff photojournalist based in Morocco, sent a series of antisemitic tweets between 2010 and 2011, prior to his employment with the AP.

In one Nov. 24, 2010, tweet, a reply to an account that no longer exists, Elshamy tweeted that he believes what he called “the filthy pigs theory,” in his view, “should only be applied to Zionists (and their women).” 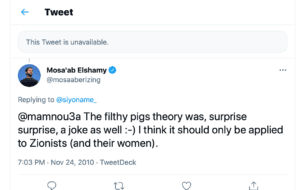 According to the Philadelphia Holocaust Museum, throughout Germany, a number of churches have such imagery that Jewish leaders have been fighting for decades to remove. “How often do you look closely at the buildings around you? Really closely? In Germany you might see the judensau, or the Jewish pig,” the Philadelphia Holocaust Museum website says. “There are around 30 churches with stone carvings dating back to the 13th century depicting Jews doing various distasteful acts with pigs. This imagery is meant to mock Jewish people, as in the kosher tradition Jews do not eat pork and pigs are considered unclean. This image in particular is from the church in Wittenberg where Martin Luther preached, and has a stone judensau showing a rabbi inspecting the sow while several people suckle from the animal. Jewish communities have demanded the removal of the carvings on churches throughout Germany but have hit barriers with some preservationists and historians. The tension between preservation and reconciliation can be challenging and is certainly seen all over the world.”

A week later, on Nov. 30, 2010, Elshamy complained about “the Jewish Lobby.” The context of this tweet is unclear and it is in reply to a tweet that no longer exists from an account that does still exist whose biography describes the person as a “thirty-something entertainment publicist.” 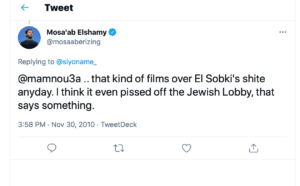 In two other tweets, from January and September in 2011, Elshamy mocked Jews for playing “the holocaust card” and said “Jewish kids,” in his view, find it “hard to complain” when their mothers use the “‘So? We got murdered by Nazis!’ card.’” 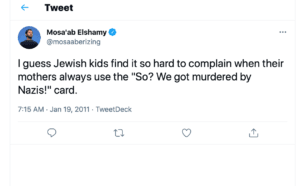 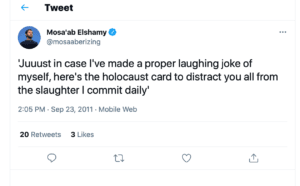 Another tweet, from June 2011, shows Elshamy saying if he had the opportunity to ask a question of an Israeli solider, he would ask: “How many babies do you have for breakfast?” 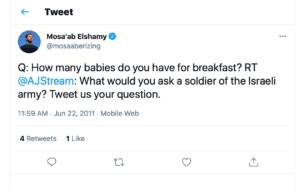 His tweet was in reply to an open thread from Al Jazeera, asking their audience what they would ask an Israeli soldier.

“The ‘blood libel’ refers to a centuries-old false allegation that Jews murder Christians — especially Christian children — to use their blood for ritual purposes, such as an ingredient in the baking of Passover matzah (unleavened bread),” ADL’s website states. “It is also sometimes called the ‘ritual murder charge.’ The blood libel dates back to the Middle Ages and has persisted despite Jewish denials and official repudiations by the Catholic Church and many secular authorities. Blood libels have frequently led to mob violence and pogroms, and have occasionally led to the decimation of entire Jewish communities.”

Two other tweets from Elshamy demonstrate a history of anti-Israel sentiment. On Dec. 13, 2011, Elshamy tweeted: “#IsraelKills because it is apartheid, because it is temporary.” 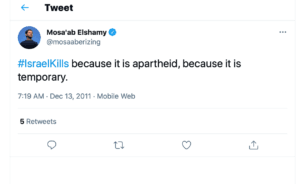 Earlier that year, on May 15, 2011, Elshamy tweeted a photograph of people burning the Israeli flag. His tweet included a comment: “Burning Israeli flg. For the umpteenth time. #IsraelEmbassy #Nakba.” 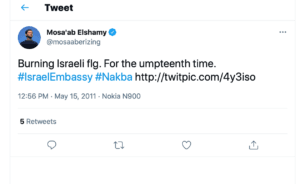 Elshamy was not always a journalist by profession. According to his personal website, he came into the profession in 2011 as part of the Arab Spring where in Egypt, revolution led to the ouster of Hosni Mubarak.

“Mosa’ab Elshamy, born in 1990, is a photojournalist covering daily news stories, as well as in-depth cultural and social documentary projects across the Middle East and North Africa. His work has been described as dedicated, humane and intimate. He is currently based in Morocco as a staff photographer for the Associated Press,” his website states. “When the Egyptians rose up against Hosni Mubarak in 2011, photography was still a hobby for Mosa’ab, who was studying for his Bachelor degree in Pharmacy. But the uprising triggered a shift in focus, and he switched to photojournalism, this time as a career. Since then, his extensive coverage of the Egyptian revolution and its consequences has gained him wide exposure, providing images and stories to TIME Magazine, Paris Match, The New York Times, Rolling Stone and Aljazeera English. As a freelancer, he supplied images to agencies including AFP, EPA and Getty Images and has had images featured on the front pages of multiple newspapers and publications across the globe.”

TIME Magazine even gave him the honor, in 2013, of picking one of his photos in Egypt as one of the publication’s top 10 photographs of the year.

The ADL has not replied to a request for comment in response to Elshamy’s various antisemitic tweets. But Neil Strauss, communications director for the Republican Jewish Coalition (RJC), told Breitbart News these and other tweets are “troubling.”

“In what world is it acceptable for an American news organization to employ people who espouse such hatred and overt anti-Semitism?” Fleischer said in an email. “A.P. needs to address this right away.”

AP communications director Lauren Easton has not replied to a request for comment in response to these tweets from Elshamy.

When similar antisemitic sentiments were found among other establishment media outlet staffers, those media organizations did end up taking steps toward accountability. For instance, in 2017, CNN accepted the resignation of editor Mohammed Elshamy after a series of antisemitic tweets he published over the years resurfaced.

On another front, while the New York Times still employs editor Tom Wright-Piersanti despite antisemitic tropes he published — that the publication publicly admitted were antisemitic — the organization did conduct a deep internal investigation and install various controls and checks and balances after the scandal rocked Times staff, following a Breitbart News investigation.

It remains to be seen which direction the AP will go from here as the publication has not answered multiple requests for comment, nor has Elshamy himself.

Elshamy has spent the past several days hyping tweets from leftists in the United States and around the world bashing Israel in the wake of the Israeli military’s move to strike a building that housed AP’s Gaza offices among other media because of Hamas assets that shared the building. While the AP initially expressed outrage about the Israeli strike, subsequent reports have indicated that the Israeli government briefed Democrat President Joe Biden’s administration on the rationale behind the strike and Israeli officials told local media there that the Biden team thought the justification was sufficient for the strike.

That has not stopped leftists and socialists like the so-called “Squad” in the U.S. Congress from viciously attacking Israel. Ocasio-Cortez, for instance, tweeted that “Apartheid states aren’t democracies,” a tweet retweeted by the AP’s Elshamy:

More information is likely forthcoming after this first investigation.

UPDATE 1:42 p.m. 5/16/2021: After the publication of this article, Elshamy deleted some of the tweets. Screenshots have now been embedded for all of them.