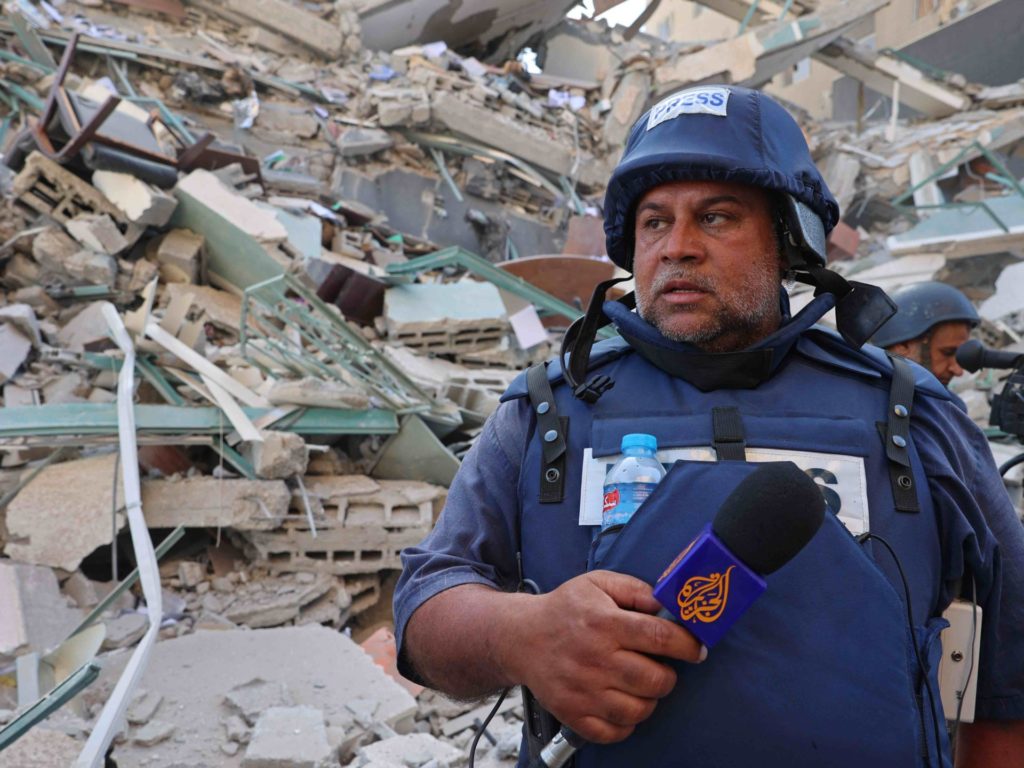 The Associated Press (AP) denied any knowledge that Jala Tower, the building housing its offices in Gaza, was also shared by Hamas terrorists, as claimed by the Israeli military and Israeli Prime Minister Benjamin Netanyahu after the office block was bombed on Saturday.

AP President and CEO Gary Pruitt denied that the news organization knew Hamas was in the building. In a statement, he said:

We are shocked and horrified that the Israeli military would target and destroy the building housing AP’s bureau and other news organizations in Gaza. They have long known the location of our bureau and knew journalists were there. We received a warning that the building would be hit.

We are seeking information from the Israeli government and are engaged with the U.S. State Department to try to learn more.

Israel struck the building as Hamas fired hundreds of rockets at Israeli civilian targets on Saturday. Many were intercepted by the Iron Dome system, but least one Israeli died near Tel Aviv.

Prime Minister Netanyahu said the building was used by Hamas intelligence: “It was not an innocent building.”

The Associated Press (AP) called the attack, which destroyed one of its offices, “shocking and horrifying.” White House Press Secretary Jen Psaki tweeted: “We have communicated directly to the Israelis that ensuring the safety and security of journalists and independent media is a paramount responsibility.”

We have communicated directly to the Israelis that ensuring the safety and security of journalists and independent media is a paramount responsibility.

She made no mention of ever having said the same to the Palestinians.

In 2014, former AP Jerusalem editor Matti Friedman wrote about how Hamas manipulates and intimidates the media:

In previous rounds of Gaza fighting, Hamas learned that international coverage from the territory could be molded to its needs, a lesson it would implement in this summer’s war. Most of the press work in Gaza is done by local fixers, translators, and reporters, people who would understandably not dare cross Hamas, making it only rarely necessary for the group to threaten a Westerner. The organization’s armed forces could be made to disappear. The press could be trusted to play its role in the Hamas script, instead of reporting that there was such a script. Hamas strategy did not exist, according to Hamas—or, as reporters would say, was “not the story.” There was no Hamas charter blaming Jews for centuries of perfidy, or calling for their murder; this was not the story. The rockets falling on Israeli cities were quite harmless; they were not the story either.

It’s easier to leave the other photographers out of the frame and let the picture tell the story: Here are dead people, and Israel killed them.

When Hamas’s leaders surveyed their assets before this summer’s round of fighting, they knew that among those assets was the international press. The AP staff in Gaza City would witness a rocket launch right beside their office, endangering reporters and other civilians nearby—and the AP wouldn’t report it, not even in AP articles about Israeli claims that Hamas was launching rockets from residential areas. (This happened.) Hamas fighters would burst into the AP’s Gaza bureau and threaten the staff—and the AP wouldn’t report it. (This also happened.) Cameramen waiting outside Shifa Hospital in Gaza City would film the arrival of civilian casualties and then, at a signal from an official, turn off their cameras when wounded and dead fighters came in, helping Hamas maintain the illusion that only civilians were dying. (This too happened; the information comes from multiple sources with firsthand knowledge of these incidents.)

Colford, the AP spokesman, confirmed that armed militants entered the AP’s Gaza office in the early days of the war to complain about a photo showing the location of a rocket launch, though he said that Hamas claimed that the men “did not represent the group.” The AP “does not report many interactions with militias, armies, thugs or governments,” he wrote. “These incidents are part of the challenge of getting out the news—and not themselves news.”

No journalists were apparently harmed in the attack, other than the apparent loss of valuable equipment and archives.