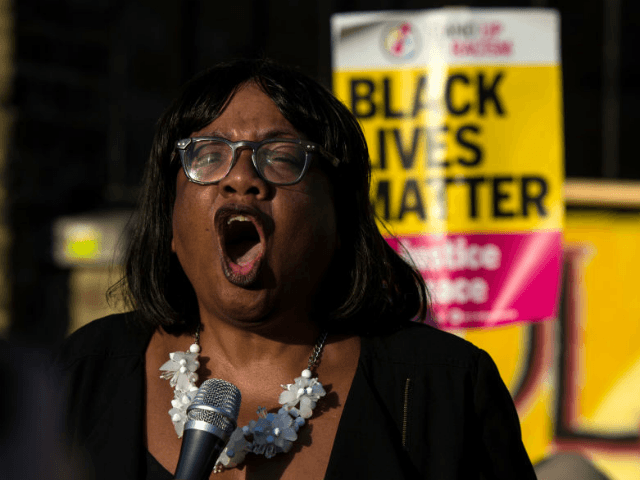 Hard-left Labour Party politician Diane Abbott said that “Nobody should have to potentially pay with their life because they stood up for racial justice” after BLM activist Sasha Johnson was shot in London — but police say there is currently no evidence the attack was targeted.

“Black activist #SashaJohnson in hospital in critical condition after sustaining a gunshot wound to the head,” the Hackney MP wrote on Twitter, adding: “Nobody should have to potentially pay with their life because they stood up for racial justice” with the hashtag #BlackLivesMatter.

However, there is no evidence that Johnson, the self-styled ‘Black Panther of Oxford’ who was reportedly shot in the early hours of Sunday morning, was targeted because she “stood up for racial justice” — indeed, London’s Metropolitan Police have stressed that “there is nothing to suggest that the woman who was shot was the subject of a targeted attack or that she had received any credible threats against her prior to this incident” in a statement which is believed to refer to the incident.

“I recognise that this incident will have shocked those in the local community and further afield. I would ask people to avoid speculating as to the motive or the circumstances behind it,” commented Detective Chief Inspector Jimi Tele.

Black activist #SashaJohnson in hospital in critical condition after sustaining a gunshot wound to the head. Nobody should have to potentially pay with their life because they stood up for racial justice #BlackLivesMatter pic.twitter.com/AlE4ELXiFl

Imarn Ayton, a fellow BLM activist and founder of the UK Black Reformist Movement, told the BBC that Johnson has undergone surgery and that she does not believe the shooting was politically-motivated.

“As far as we’re aware [Johnson] was at a party and there was a rival gang that may have heard about a person being there that they didn’t feel comfortable with, or trusted, so they resorted to driving past and shooting into a garden. And one of those shots obviously hit Sasha Johnson. But I don’t believe she was the intended target” Ayton told the publicly-funded broadcaster in comments quoted by MailOnline.

“This incident is more related to rival gangs than to her activism,” she added.

These specifics and any gang-related motive for the shooting are also unconfirmed by police at this time.